We had a nice time in Avon (Kinnakeet), NC last week. Marty put up a few pictures over on his blog you can check out. Logan enjoyed the pool, which was sort of the only 'activity' he can do at this point. 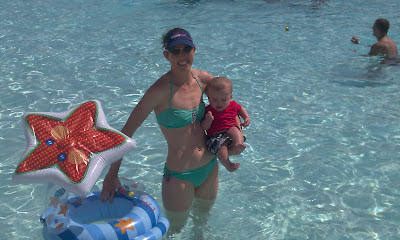 We took him to the beach for a short period, just to stick his feet in the water and let him feel the sand on his feet. I didn't want to actually sit him in the sand since I know that he would immediately try to eat it and then rub his eyes or something. He didn't cry, but he was definitely a little scared when the waves came up to him.

He's a lot of fun and very smiley and laughy. He's also a total ham when the camera comes out - case in point: on our way to the Natty Green's pub run last night I was trying to take a picture of his hair. Daycare had fashioned it into a fohawk and it was so cute. "Logan, look at me." 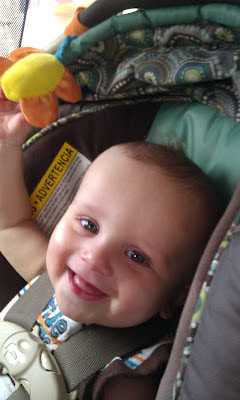 And you can barely even see his fohawk! 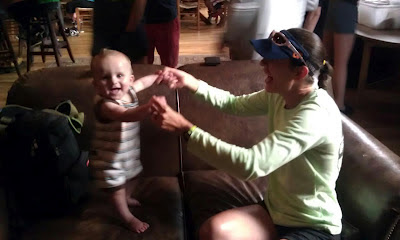 To answer a friend's question - yes, he definitely cries. I suppose I could take some pictures of him crying instead of posting all these - but believe me, he can get unhappy, too. Like when I change his diaper in the morning (seriously, you want to continue to sit in a bunch of pee and poop?) We're also going back and forth with what to do in the early morning when he'll start crying. One of us has usually jumped up to get him and feed him, but we're realizing that he's not eating a whole lot and he's probably not all that hungry. To cry it out or not - and if you do any research you'll quickly find that there are a lot of strong opinions out there and advice is all over the place.  Last night he cried right around 3am but we didn't jump up and he went back to sleep until 7am after crying for less than 5min. I doubt that's always going to happen but it was nice.

I'm racing this weekend at the Lake Logan sprint triathlon.  While on vacation I was able to run a bit and do 2 short swims, but overall training has been pretty half hazard the past couple of weeks so it should be interesting to see how I feel.

Why don't they make little kid's floats for adults?!

Good Luck this weekend, I am sure you will do fine. Getting real sick of you people who barely train and win races. :) j/k.

Not going to him right away in the middle of the night at this age is just part of the learning curve. He's definitely capable of going without the 3 AM feeding now. Back to sleep in 5 min for another 4 hrs proves that!

We let Zach cry it out around 6 months and he finally slept through the night - it took three nights but after that he was a good sleeper....until he was about 3 years old. Now I hear him screaming "Mom, I want you. NOW!"

And I love the pictures of you guys at the brewery. We do that with Landon as well and I'm glad we aren't the only ones.

I tried the "cry it out" approach with Ryan for 1 night and couldn't handle listening to him cry. So I would just stick a paci in his mouth and leave the room. That sufficed for ryan and after two nights, he was not crying anymore.

The other thing we did that worked well for Brayden was a device from "First years". It sits on the crib and has a noise sensor, so when they cry it starts playing music or a heart beat sound or some sort of soothing sound and puts them back to sleep.

Thankfully, Gabby has not needed any of this....God love that child!