Short Report: I didn’t break 1:30 which was my pretty arbitrary goal. But I still had a fun time in Wrightsville, ended up winning the 35-39 age group (when did I get so old) and getting a growler for my efforts which was promptly filled with yummy beer.


Long Report: Heidi picked me up Saturday afternoon and drove us down to Wrightsville Beach.  We picked up our packets, checked into our hotel (Blockade Runner – sketchy on the outside, great on the inside) and then got a beer at the Lighthouse Beer & Wine store before dinner. We were in bed early and both actually got a decent night’s sleep which doesn’t always happen the night before a race in a new bed.  We were up bright dark and early as the race started at 6:45 am. Our hotel was about 1 mile from the start so we jogged down there for our warmup.  Everything was really easy and smooth.


So. Goals. I had picked 1:30 way back in the fall because why not.  My PR from the last time I tried to race a half marathon was from the Disney Half Marathon in Jan 2010 where I ran a 1:25:52.  Prior to that, I had run a 1:31 at the end of a half Ironman and 1:33 in Sydney, Australia when we lived there for 4 months and I wasn’t even truly training for the distance. But a lot has changed since then and those times are in the past.  1:30 seemed like a really hard stretch goal for me at this point and it was.  When I did pace work in my long runs I would sometimes hit that (6:52 per mile) but often I wouldn’t. Or I could hit it, but couldn’t sustain it for a many miles. Sometimes I was able to string together some miles that were under that pace. My training definitely didn’t indicate that I would be able to break that 1:30 barrier, but it wasn’t going to stop me from doing what I could during my workouts. I wasn’t frustrated or anything, it just wasn’t there.  I average around 20-25miles a week – this is not a lot, and I think I do pretty good with what I can get in.  Having a half marathon in the spring is a perfect goal for me because the distance scares me just enough.  Anyone who has been around me for any length of time knows I DO NOT like long distance races. I love 5Ks and the occasional 10ks. But those don’t scare me. Signing up for a half marathon would get me out of bed and out the door when it’s 30 degrees and raining. Or out the door for a 12 mile run with 6 of it at goal pace. It’s not easy to train through a winter but this was my way of keeping some semblance of shape.


I lined up with my athlete, Ali, who is a great runner and was also trying to break 1:30.  At first we were right next to the 1:30 pacer, but he seemed a bit back so we moved up so weren’t feeling so claustrophobic. The race itself was pretty anti-climactic. We started off just under what would be 1:30 pace and I was able to hold on until mile 9. I knew I was pushing it a bit to keep that up and that’s when the wheels started falling off.  I had a pretty low point at mile 10 but was able to mentally get myself out of it and rallied for the final 2 miles.  Rallied meaning I didn’t slow down anymore, not that I actually picked it up :) The finish was one of those cruel ones where you are right there but then they  make you run an little extra loop to actually cross the line.  My feet were killing me by this time (I’m thinking I’m going to lose 2 toenails this time around) and my quads were also screaming. My calves, which were always on the verge of cramping the last 3 miles held out (thank you calves).  My final time was right around 7:00 pace. This was not an easy 7min pace with how I ended up running it. I’m pretty sure had I gone out at that pace the whole thing would’ve been pretty comfortable, but where’s the fun in that? Races are supposed to hurt.


I was able to pretty quickly find some friends and catch a ride back to the hotel. I  showered, ate a little, then drove Heidi’s car back to the finish so I could catch her when she finished the marathon (she qualified for Boston with over 10min to spare!).  Everything about this race was easy, from logistics to the course – I have zero complaints.  If you want a fast half or full marathon with plenty of spectators and a nice venue, here it is.  I would say most will admit that the course itself is a bit boring, but most are also looking for a fast time. We both won beer growlers, which is quite a unique award. I doubt many people have their own growler that says 'Award Winner' on it!


After getting our awards, we packed up back at our hotel and then filled our new growlers with beer at the Lighthouse Beer & Wine Store.  We were back in Raleigh just a little 24 hours after we had left, tired, happy, and glad to see our families.
Posted by BriGaal at 3:08 PM 1 comment:

Is it spring yet?

My last blog was about a month ago, talking about the fun relay Marty and I did with the Klaitman’s. Since then I’ve been plugging along with my training for the Wrightsville Beach half marathon. I’ve made it to the track a few times for some actual speedwork, and got the long run up over my typical comfort level of 10 miles.  I did one 14 miler and a few 11-12 milers.  Our February weather sucked at the end of the month so some of the runs were spent dodging ice and snow and one particularly awful run was in freezing rain. At least I had Heidi with me who always keeps the conversation going.  Our temperatures were way below normal and I think everyone was done with winter by the end of the month.  Our winters are typically mild so if you give us a few weeks in a row of days that don’t get out of the 30’s we’re all sorts of cranky down here.

My original goal for the half marathon has been to get back under 1:30.  I think I have a shot, but it will be tough.  I’ve been running 3-4 times a week which isn’t a ton, but with other parts of ‘life’ it is difficult for me to get in much more. Personally, long runs can be very hard, and although my race-pace portions have not indicated that I will actually run under 1:30, overall I’ve been handling the distance much better than I have in the past.  I also ran a 5K this past weekend where I (very surprisingly) ran a 19:10 on a hilly course.  Several months ago I was having trouble even getting close to breaking 20min and when I warmed up on the course and saw the hills I inwardly groaned that here comes another 20:30ish blah. The course didn’t have any mile markers set out and I didn’t wear a garmin so I had zero knowledge of my pace until I made the final turn towards the finish line and saw it was in the low 19’s. Sweet.


I literally did a 4min cooldown and then jumped back in the car so we could shower and get ready for the rehearsal of Rita’s wedding. Rita has been featured throughout mine and Marty’s blog as
‘the best babysitter ever’ and she had asked Logan to be one of her ring bearers.

The wedding was the next afternoon and after dressing Logan in his outfit (where he told me: you hurt me mommy. The pants hurt my legs) I asked if I could take his picture.  This is what I got. 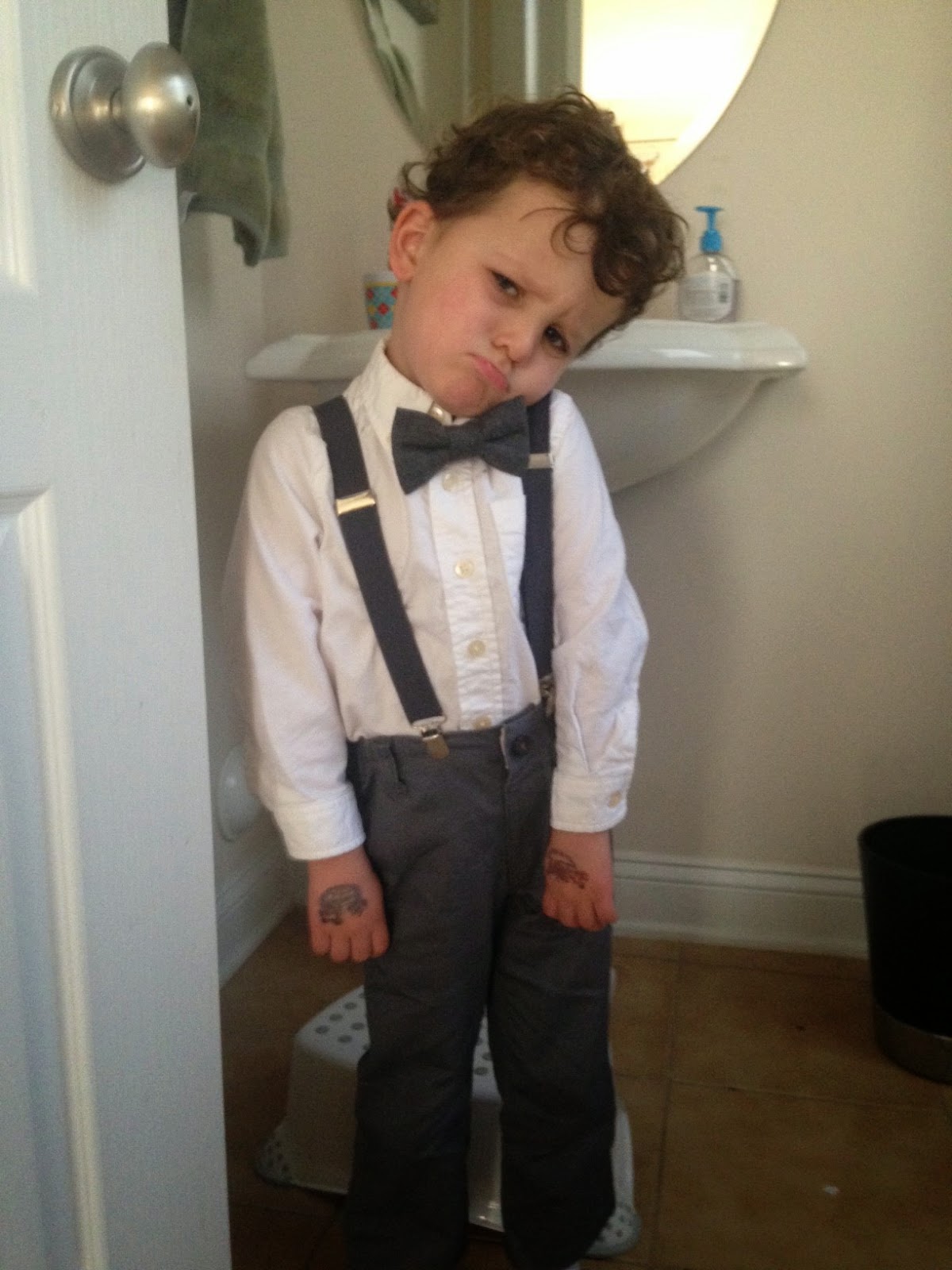 Luckily he rose to the occasion and did a great job when it came time to walk down the aisle.


And some other pictures: