I felt like I needed to blog about the training that has happened (as this training is never to happen again! Hahahah). Ironman Texas is 3.5 weeks away so the hard stuff is done at this point. And I’m here at the other end of it in one piece and still smiling! I mean for the most part anyways, there were times where I wasn’t smiling. For instance, during round 2 of the triple brick, when it was 42 degrees and we were getting rained on and I was feeling awful – the good news is my initial reaction is all captured on a Go Pro. I’m putting my bike up in the middle of this round and look at the camera: I…….(very long pause. So long you think I might be done talking)….I don’t like this.

But what have I accomplished? Enough to think that I may actually be able to finish this thing. 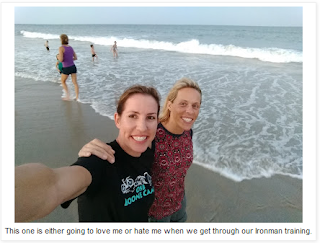 So, the weather. If it’s 40-50 degrees I am confident I will have a good run and nail my nutrition. Because that is literally all I’ve been training in. OF COURSE IT’S NOT GOING TO BE THAT. So who knows what’s going to happen? I will get to that finish line one way or another.
Posted by BriGaal at 4:15 PM No comments: