We spent an extra day in Chesapeake, Va at my sister's house after the area got 14 inches of snow. That is a lot of snow for the 'South!'

Here's my niece heading out to play in it. 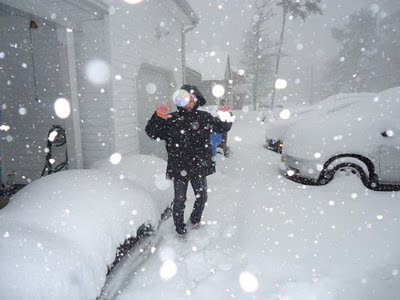 Tassie had fun in it with her Great Dane cousins. 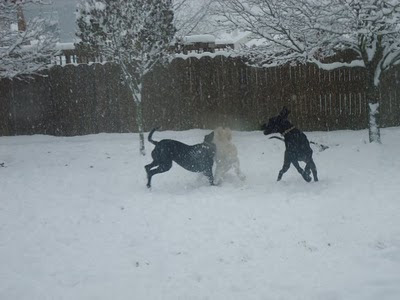 Marty had to dig us out so we could get on the road Monday. 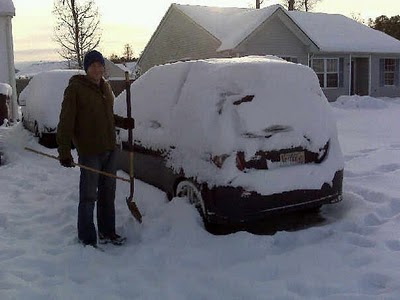 The snowstorm didn't come until very early in the morning the day after Christmas, so Christmas day was nice. Marty and I went to a park near Virginia Beach for a run on trails - wish we had known about this park in years past! It sure beats the Dismal Swamp paved trail we've run before.

Here are a couple of shots from Christmas morning.

OSB hoodies were a hot commodity this Christmas season - but I got mine! 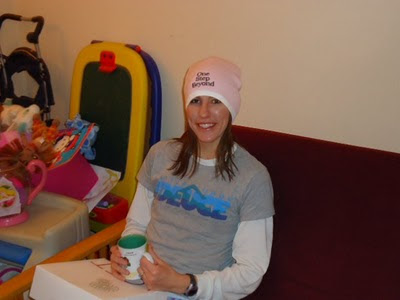 Haileigh and I also got matching Eclipse DVD's. 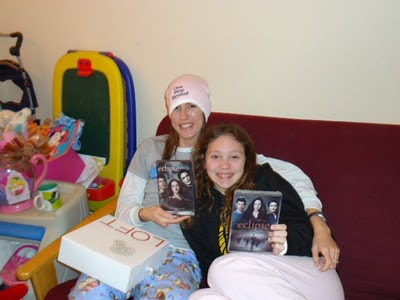 A Total Wine gift card and Marty is one happy camper. 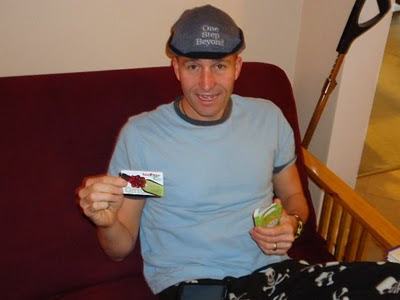 ...for Christmas parties! My department at work had a Christmas lunch at Maggiano's. Did you know that Maggiano's means "oversized portions to help you gain 10lbs between Thanksgiving and New Year's"? I know, it's amazing they could fit such a thought in one word, but those Italian's are sneaky.

That same night, we hit up the FS Series Holiday Party where Marty received a special present from Jason and the gang - a Shake Weight. They were all, "This is why Marty is one of the fastest triathlon swimmers in the area" and "Powerstroke!" If you have not heard of the Shake Weight, I suggest you push that rock out from over your head. But I'll also put the commercial up for you, since it is Christmas time and I'm feeling generous.

They have one for women, too, in case all you girls out there are interested in purchasing one for yourself. Now this next video is hilarious but may not be suitable for younger viewers, or for those who may get offended easy. Saturday Night Live did a skit based on the Shake Weight:

Okay, enough talk about how I'm going to have AMAZING arms in just 6 minutes.

Friday night was spent with some good friends and Saturday was chock full of Holiday Spirit. We started the night with the TAF group at Cafe Caturra before heading over to the main event - Nas's Christmas party. This party features a very popular white elephant gift exchange. We ended up with a space rocket projection alarm clock. 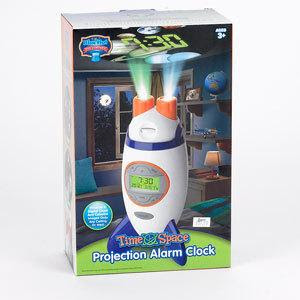 Honestly, it's really cool. The person who brought it had told her husband beforehand, someone is either going to think this is totally stupid or some geek is going to love it. Huh.

I did find an Sam Adam's Oktoberfest in the fridge. Yeah, I don't care that it's December and this beer was probably made 3 months ago. It's my FAVORITE Sam Adam's beer. And everyone knows that their Oktoberfest only lasts for about a month and a half while their disgusting Winter Lager lasts until March. It was like my birthday finding this gem in the fridge. Or maybe like Christmas. 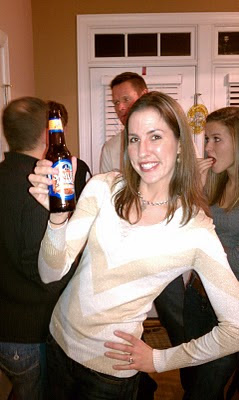 In order to recertify as a USAT Triathlon Coach, you need to obtain a certain number of continuing education units. Marty and I had originally planned on getting our Level 2 USAT certification in Colorado Springs back in October, but when we found out that the curriculum was mostly geared to coaching juniors and pro's, we decided that it wouldn't be worth our time and money (that's not our clientele). Instead, we saw that Charlotte was hosting a USATF (Track & Field) Certification that would be worth 10 CEU credits towards our recertification.

This was really good for Marty since he will most likely be coaching high school track this spring. And it was interesting to me since I have a pretty extensive track background, although it's exclusively with the distance events. Even so, you can't go to one of these and NOT learn additional information and new discoveries/training methods. Plus, it was neat to learn more about the jumps and hurdles and all the other events that I don't have much knowledge on.

The clinic was excellent. The information was interesting and the speakers were top notch and great. The amount of hours was insane, though!

We got an hour lunch break on Saturday and Sunday and a few 5 min bathroom breaks sprinkled throughout. That was it.

It was definitely worth it, no doubt about it. It just made for a very long weekend and when you work a full time job in addition to that, it's tough to turn right back around Monday morning. Oh well, sometimes you have to suck these things up.
Posted by BriGaal at 9:39 AM 3 comments:

Saturday night the Victorious Secret Doughman team reunited for a farewell party for one of our members, Brooke. Her and her husband are moving to Boulder in a couple of weeks and we're really going to miss them. Don't worry, Brooke is going to fly back in May for the 2011 race. 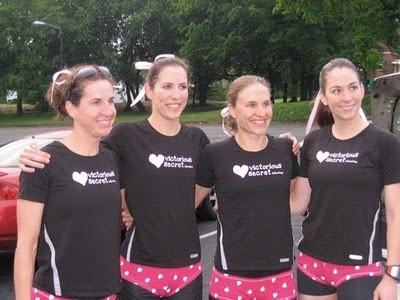 Sunday, Kari and her husband graciously came over to take family pictures for us. Marty put some of the good one's up on his blog. I'll put up some of the not so good ones. It's actually sort of hard to get your dog to look at the camera - there was a lot of "Tassie! Look here!" shouted from Kari and Bobby. Even so, I was surprised at how many she did look at the camera. Here are some of the others: 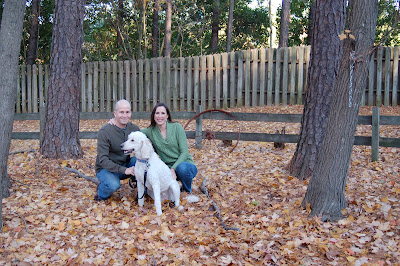 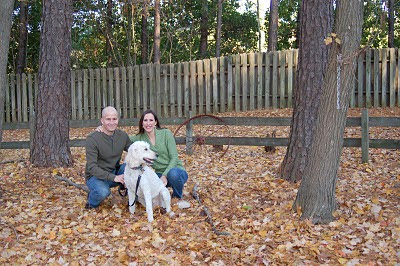 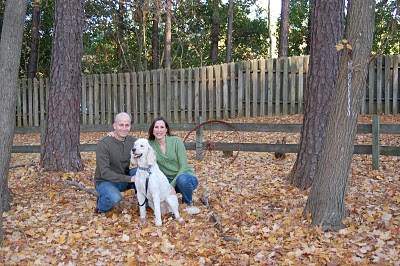 Tassie, sit on my knee and look chagrinned. 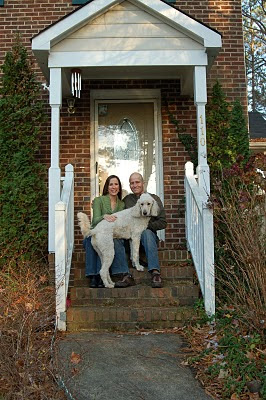 Tassie, sit. No, not that way! 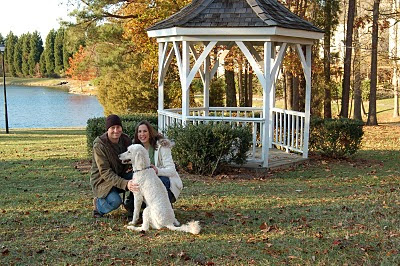 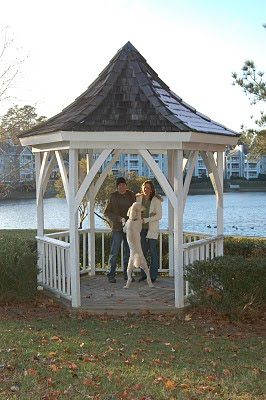 Tassie, stick your nose in the air. 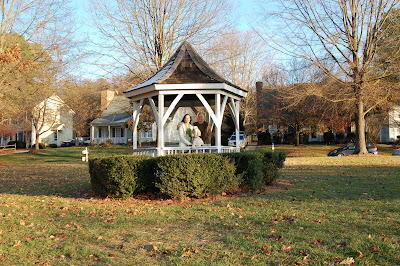 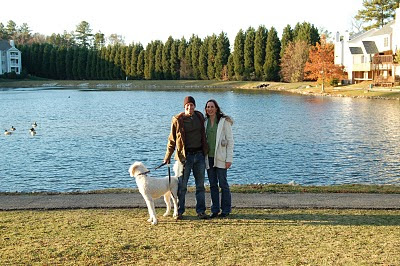 Tassie, do something funny with your tongue. 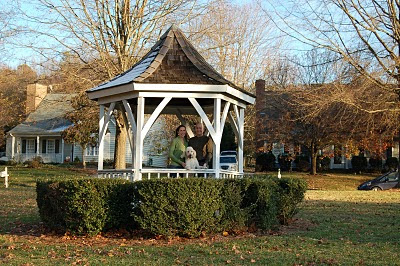 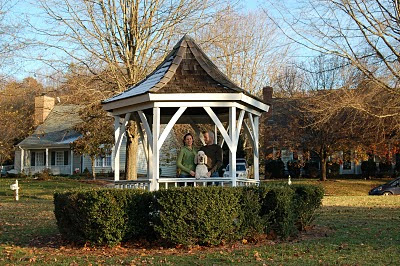