Right now, at this point in time (I'm saying these things to make myself feel better), Logan prefers Marty over me.  I'm not sure why, it's not like our parenting styles are much different. And honestly, there's not a whole lot of parenting going on right now other than the occasional "don't eat that rock" or just the general "Logan, NO" - there's lots of playing and cuddling and reading. Okay, Marty does make some kick ass fart and bomb noises. I'll give him that.

The other week we went to pick him up from daycare together, which we often do. Logan was busy playing so I said "Hi, Logan!" he looks up and smiles and then makes a beeline toward me. So I bend down with my arms stretched wide....only to have him bypass me and right into Marty. Even the teacher couldn't help herself and said, "Buuuuuuuurrrrrrn."

This morning I was in his room first, and while we were looking at the aquarium attached to his crib, Marty came in.  When I went to pick Logan up and out of his crib he freaked out and pointed his arms toward daddy, and promptly settled down when I gave him up.

Luckily, when Marty isn't in the room, Logan DOES like me. I try not to let the preference bother me right now, and just take what I can get.
Posted by BriGaal at 7:17 PM 4 comments:

I don't like pumping gas, and lucky for me, Marty is easily influenced by my pouty face so he usually does it. But on occasion, I do have to pump my own gas. Here is why I hate pumping gas:
However, all of these reasons still don't make me want to move to New Jersey.

(Okay, for those of you who don't know, you aren't allowed to pump your own gas in New Jersey. They have attendants for that)

It seems this has been a winter of sickness for me so far. The past 2 years I have barely been sick but this time around I'm picking up everything and not able to kick it. I call it 'Life with a 1 year old in daycare.' Last week I was tired and achey. The Thursday morning OSB run, which I lead every week, was not my best effort. But on purpose as I wasn't going to push super hard when not feeling all that great when it was also 45 degrees and raining. Yup, but guess what, OSBers are hardcore and 7 others met me out there.

Saturday's long run didn't feel well, but I got to run with Michele and she kept my mind off of my body so the 70min went fast. Then I ended up bailing on a friend for a bike ride on Sunday because I was feeling very dizzy. Which has now turned into the world's worst sinus headache. Yes, I have the worst ever sinus headache in the world. Because it hurts like a bee-yotch and I said so.

All was not lost, because I still got to enjoy a great dinner out with my girls on Sunday.  We try and do at least one a month, and I really look forward to them.

Work has been crazy busy. Busy enough that a couple of times I've had to get back online after Logan goes to bed.  I certainly don't like having to do that, but it's better to be busy than not.

And I've also disabled anonymous commenters, something I should've done a long time ago. But seriously, you're going to go all preachy on me about giving my kid vaccines and not even leave your name? Lame. Put on your big girl or boy pants and don't hide if what you have to say is so worthwhile. Because instead I just think you're a regular old internet troll.
Posted by BriGaal at 1:20 PM 4 comments:

This past weekend had much of the eastern US crowing about the gorgeous weather. If you're in Florida, yeah, we get it, it's warm and sunny. YOU ARE IN FLORIDA (my facebook feed is full of beach pictures from people who live there; where you at in August when it's sweltering, huh? huh?) Anyways, it's not supposed to be 77 degrees in NC in January, but oh yes, it was and we had an awesome bike ride. 50 miles! With a 10min run after!  We had a nice group of OSB'ers and friends and I realized that boy do we talk a lot.  At the store stop I'm sure people thought we were pretty obnoxious (but fun, probably wished they were with us), and someone else told us they heard us before they saw us when they passed by.

Speaking of Florida, I'll be heading to the Sunshine State in early February to participate in my high school's inaugural Alumni/Parent track meet. They just built a sweet rubber track and I thought it would be fun to go down there and run on it. Like many of you who ran track in high school, we had a cement track with lots of cracks and grass growing in parts of many lanes.  And as is typical for this type of 'event' there are pretty much no details. I know that the running events start at 11am, but that's about it. I'm not even sure what running events there will be. Hopefully, they have some real events and not just the softball throw, standing broad jump and 8x50yd relay. I'd like to run a mile and try and break 6:00. I think I can do that, but who really knows. I haven't been on a track in a long time and certainly am not training for that type of race.

My mom graciously told me I could borrow her car if I needed to, probably to see friends or what have you, but really I don't have many friends down there at all. You think you're close to people in high school but then you go off to college and make much closer friends. Although I feel like I am close to my college girls, we are all spread out so I hardly get to see them.  I'm most close to the people I see in my everyday life, which is about right.

And now some Logan updates. Cute as a button, exerting what I like to call his strong personality, getting more curls, and saying sort of words or at least sounds that are words that we understand what he means. He recently had a reaction to the MMR vaccine which is no big deal (we know this now, after the fact). He woke up covered in spots on Saturday morning and we thought it was the chicken pox. They were worse Sunday morning but then slowly faded. After googling lots, and seeing symptoms that matched exactly, I'm 99.9% sure that it was a rash from the MMR.  Too bad our pediatrician over the phone and the doctor at Urgent Care couldn't confirm. They went away Sunday afternoon and the spots were the only side affect.

This one could be all over the place.

Christmas was fun. Much like orphan Thanksgiving, we had orphan Christmas. Friends who also stayed in town with no family came over and I cooked them all lasagna and Marty made meatballs. They said it was good - not sure if they were being nice or it really was good. I am not much of a cook.  I don't have a picture of this because they are all on Marty's phone.

Stuff happened in between Christmas and New Years, but nothing of note since I can't remember. I was sort of sick that entire time - no flu or anything just cold/underweather very tired sick. Also, I keep seeing people talking about getting the flu but they're better 24 hours later -- that's not the flu, people.  The flu lasts a long time, and even when you're over it, you're still really tired.  I always get a flu shot since it's free at work and I figure it's better than not getting a flu shot. Even though I realize a strain could come up that's not in the shot. I've had the flu once in my life and I NEVER want to get it again.

Anyways, we were lucky to score a babysitter for NYE which is a very hard thing to do. But honestly, if you are a babysitter this seems like the dream job. Logan was already asleep before she came over so she got paid to watch tv.  I was so glad she agreed to it, though, because my bff #1 (only because I met her first) was having a NYE party, then moving to Maryland.  I couldn't miss it and I couldn't dip out early which is the norm for us.

I've been getting in some consistent training over the past few weeks. Nothing earth shattering, but 2 swims, 2 bikes, and 3-4 runs a week.  Plus some TRX for strength training. I now have 2 races planned for the spring :  Sampson County Super Sprint and Belews Lake.

Logan had his 1 year checkup (even though he's almost 13 months). He weighs just over 21lbs so still not a big guy. His height is pretty standard, I think it was around 65-70%.  I got a good picture of his belly the other day - he is so funny with skinny arms and legs and a giant pot belly. Also, I can see how some people may have to get rid of the family dog when they have a little one if the dog isn't totally nice. Logan can literally be all over Tassie but she doesn't have a mean bone in her body so it's totally fine. He'll walk up to her and try to stick his hands in her mouth and try and sit on her. When he pets her it is usually very gentle which is great. But she has so much patience with him. This picture was not staged. 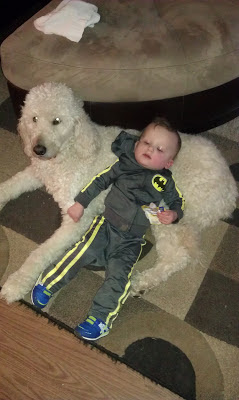 And one more thing. GO IRISH!!! This has been a long time coming for us Notre Dame fans. 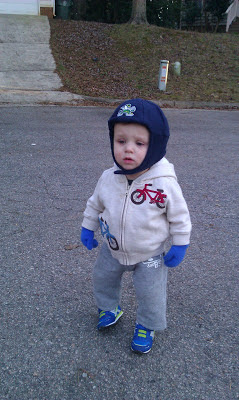 AKA I have the mental capacity of a 12 year old girl.

I love reading, but purely for enjoyment. I love easy fiction, a good story, things that take my mind off of everyday life. So looking at other people's reading lists I do feel a little, shall we say, dumb? I did not read one book this past year in an effort to better myself. Nope. I read because I like books. Mostly teen post-apocalyptic books. At least I can say that you won't see 50 Shades of Grey on this list (only because I read it when it was fanfiction - #cringe #nerdalert #terriblywritten). Without further adieu...