Here's a video of Logan, and Marty, showing off their b-ball skillz. Marty might look like he knows what he's doing with this kids hoop, but all credential went out the window when he said to me, "Yeah, I was a center-strong-forward on my high school team."

Right, and I made 5 pointers.

This is a clever ad campaign from Colgate to sell dental floss. 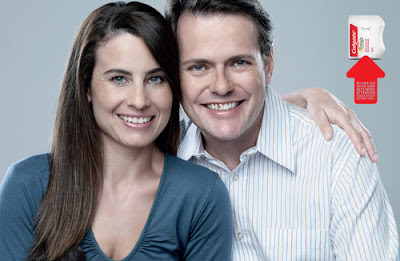 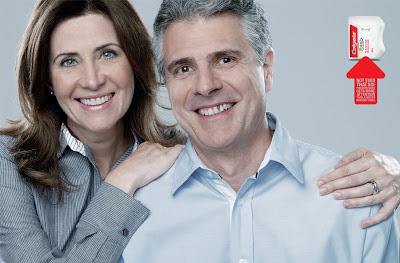 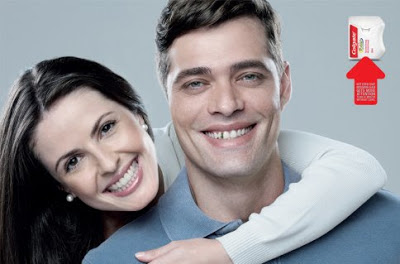 Gross, right? Who wants food stuck in their teeth? I'm also wondering why it's all the men who are pictured with food in their teeth. But, here's what you might've missed:
Bottom line, people will notice little else if you have food stuck in your teeth.

It's a cute ad, but really it's telling me to look at my teeth after every meal, when it's actually more important to floss every night. So Colgate, nice try, but get to working on a new one.

This past weekend I flew down to Florida for two reasons. To see my mama and hang out with her and run in my high school's intrasquad alumni/parent track meet. Marty was on Logan watch all by himself and they had a great time during their boy's weekend.

I flew down on Friday morning, easy-peasy less than 2hr flight to Tampa, where my mom was waiting to chauffeur me around. Which she did, all weekend. It was even a little funny having her drive me to a 'meet.' I felt like I was back in high school!

The weather in Florida right now, as per usual this time of year, was G-O-R-G-E-O-U-S. I immediately went to the Southwest Recreation Complex for a swim. It was 75 degrees and sunny with not a cloud in the sky. I left the pool with a bit of a Speedo tan. Score.

My mom and I went to see Argo that night (highly, highly recommend this movie) before getting dinner where I ate so much that my stomach hurt. Winning.

The track meet was Saturday morning at 11am, but was very loosely organized and I didn't exactly know what was going on. Turns out they were using this as a practice for this year's team as well as for the parents since they were now hosting a meet this season. The old track (the one I ran on), was a six lane cement nightmare that had many cracks, sand, and grass growing through it. The school put in a brand new rubber track and updated all the field events areas - it is NICE! This is the first season with the new facility, which was one reason to have this weekend track meet.

They ran it just like a regular track meet with field events first, followed by all the running events. Track meets in general can be difficult to time properly with a warmup, and this one was even harder since I really had no idea what was going on.  I went out and jogged for 15min, got a stomach cramp, and wondered who's great idea this was to try and run a mile all out.  I also realized that it might've been smart for me to actually get on a track prior to this and run some 400's so I knew what they would feel like. Nothing I could do about that now - my original plan stayed. I was going to wing it.

I'm not sure if it was lack of getting the word out, or people thinking they would embarrass themselves, or what, but there weren't a whole lot of alumni who came out for this. That was a bummer. I was hoping to see people I hadn't seen in years.  A few parents were brave enough to jump in some events, and of course all the kids were competing.

Anyways, they ran the 110 hurdles, 100 meter dash, and next up was the 1600 meters. Myself, several moms and dads, and a handful of students lined up.  I'm smiling here realizing that this was going to hurt. 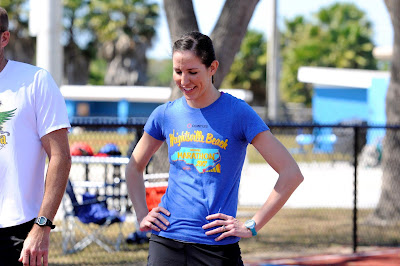 Okay, so I'm certainly in shape. It's not like I just decided to jump into a race at the last second not having done anything, but I'm not in shape to run a mile all out.  Thursday mornings we do a run workout - a fartlek or tempo run on the bridle trails, but I haven't actually been on a track in many months.  My goal was to break 6:00, which I was pretty sure I could do. I just wasn't sure how much lower than that I could go. Top end speed takes lots of hard intervals. I figured that if I felt good I could get around 5:50. 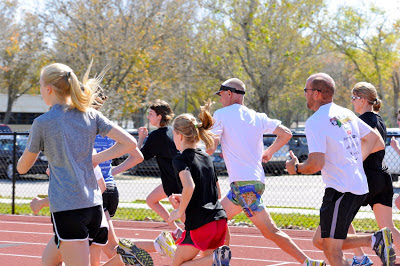 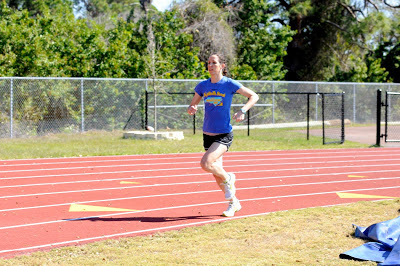 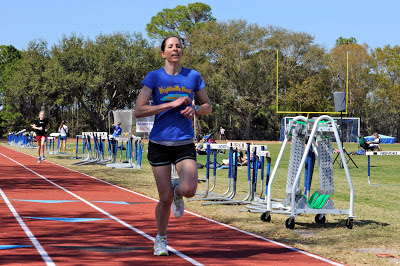 While I was running, the current coach said some nice things about me, talking about how I won the most state championships of any student at the high school - I actually didn't know this because I couldn't hear the loud speaker, but that's what my mom said and it was funny to have everyone clapping for me down the homestretch. Hard not to smile when all these kids are cheering for you.

I'm really glad I went down there for the meet. It was fun to see my old coach, the new coach, all the kids running for my high school this year and some of my former teammates who came out to run and cheer.

That night my mom and I ate a delicious dinner at The Columbia Restaurant on Sand Key. I love their 1905 salad - YUM! I flew out at 11:10 am the next morning, landed at 12:50 and was on my bike at 1:50. So still got some good tri training in even with the mini vacation.

Throughout the weekend, Marty kept me up to date with how he and Junior Awesome were doing with texts, phone calls, and of course pictures. Here are some of the ones I got. 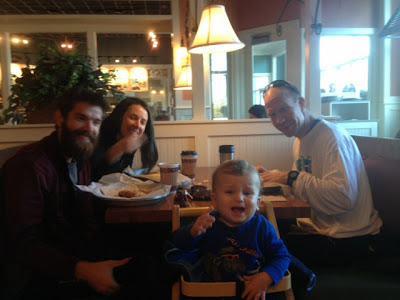 This was after the long run on Saturday morning. I imagine Logan is making that face because he always wants Marty's phone. Also, he was scared of Kory's beard and almost cried. 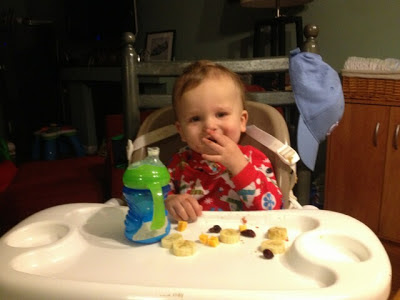 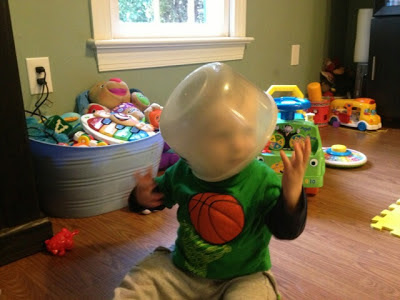 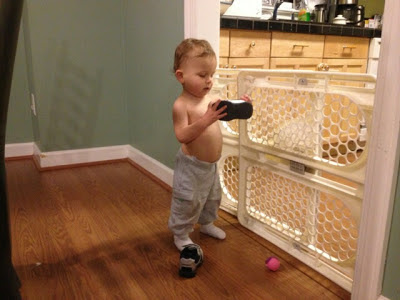 And finally, Marty went to Target and got Logan a couple of super hero t-shirts. Batman came with a cape - how awesome is that?! He wore it to daycare yesterday and it stayed on all day, amazingly. 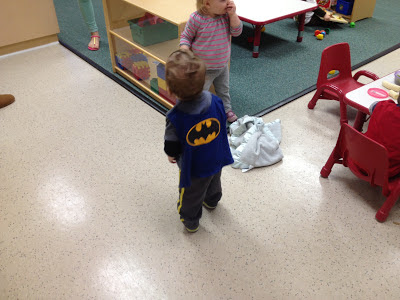 On Being (sorta) Hardcore

Marty and I lead several group workouts throughout the year for our athletes. More during the season, but even during the winter we have a handful. On the weekend we've typically been doing a long run on Saturday and a ride on Sunday. The Saturday morning runs have been chilly, but running in the cold is totally doable. It's biking in the cold that really kind of sucks.

If you have the right gear, it will make a world of difference. But geez, just getting it all together is a workout. Then you have to be all crafty about how and when you put on your clothes because the last thing you want is to start sweating before you make it outside.

Last Sunday, it was very cold for NC. I'm not sure the high even reached 40 degrees that day, and at 11am my phone was reading 28 degrees. Who knows what the feels like temperature was (and honestly, the 'feels like' temperature always confuses me, maybe that's the temperature they should just show?).

Unbelievably, 7 others met me for the ride.  This is what I wore:
I was toasty. I was slow. But I got the ride done. And a run off the bike, so I did sort of feel like a bad ass even though I didn't ride fast.

In years past you wouldn't have caught me out of the house on my bike in that sort of temperature, but knowing others are counting on the group, having limited training time with Junior Awesome, and the 70.3 looming in the not so distant future all got my butt out the door.

And now, some Logan pictures. 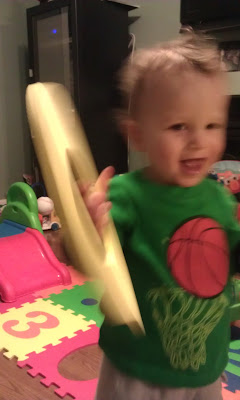 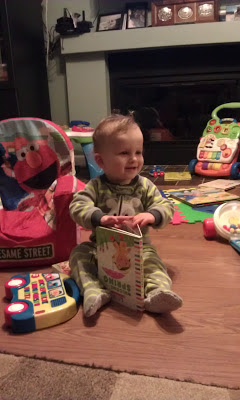 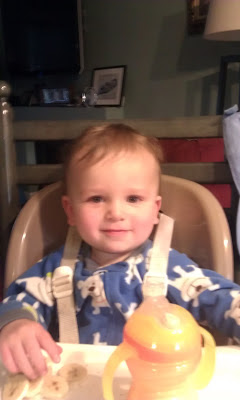 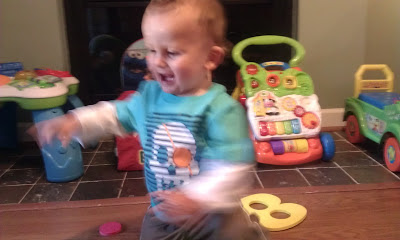 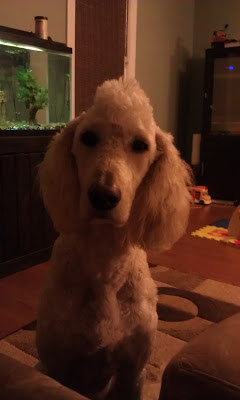