The Washington sprint triathlon would be my 4th race in the Triangle Orthopedic Triathlon Series put on by FS Series. You have to do 5 races to receive some schwag at their end of the year party, so that has been my unofficial goal once I realized it would be possible schedule-wise.  This race is not as local with it being 2hrs away but I convinced my friend Heather to do it so we booked a hotel room and got down there on Friday evening.  Marty stayed back with Logan and they went to the Wake County Speedway on Friday night which is Logan’s version of heaven on earth. 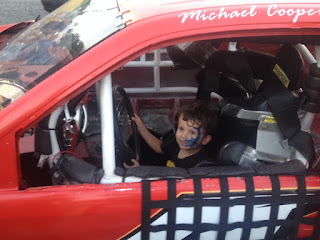 I’ve had nightmares about this race from last year’s version which was so, so, so hot and humid.  The run was a complete meltdown slog-fest that was not fun at all. Luckily for us this year, it was not going to be nearly as bad. Just normal summer hot. No issues race morning, just some miscommunication about the actual sprint race start which led to me getting absolutely zero warmup for the swim.  And then I was a Manny/Doug sandwich for the first 75 yards before I stopped and decided to lose time but go wide and be able to swim more comfortably. I didn’t feel good until the last 100 yards. Then I got into transition and managed to get my swim skin stuck on my chip. This was my first time wearing it in a race and am pretty sure any time I gained wearing it was lost dilly-dallying with it stuck around my ankle.  The bike was meh. At least I went faster than last year. Also had a car pull out right in front of me towards the end but I saw the little old lady from afar and was prepared for my escape route. I was in the lead coming off the bike and was not feeling all that great so was hoping to just cruise the run so it didn’t hurt too bad.


The run is an out and back, basically flat course.  I trudged to the turnaround not feeling it and then saw Liz coming the other way all spunky and bouncy and thought “Noooooo, now I’m going to have to pick it up.” Actually, I really thought she was going to pass me quick, but she didn’t and when I hit the 2 mile mark I realized I didn’t feel that terrible anymore so decided to press the gas a bit.  I was able to hold her off for the win.
I tried several times to put in a podium picture of the top 3 but the photo wanted to be upside down no matter how many times I rotated and saved it. So just pretend that it's here.﻿
I’m going to try and be a little more serious and consistent with my training over the next 4 weeks and feel better at The Battle at Buckhorn (race #5 for the series for me).  I’d like to actually feel like I’m racing and be able to dig instead of just going through the motions out there.  Me being serious will mean hitting up a few group rides, possibly making it to Master’s and doing some track workouts. Hopefully this crash course will do the trick.  Now, our travel schedule over the next few weekends is going to be the hardest thing to get around, but hopefully my supportive husband will help me get what I need in.

Posted by BriGaal at 1:41 PM No comments:

Time for a new update

Time for a new update. Last one was about the loss of Tassie which is still crushing.  We miss her so, so much.

A ton has happened since the end of May. I turned 36 (wow, 36). We did the 3 Little Pigs triathlon in Smithfield. This is a fun little sprint that’s not too far away from us.  It’s only a 250 yard pool swim which was good since I was still barely swimming at the time. Even in shape, pool swims suck so I figured ‘why bother.’ It was a super hot day and I think everyone suffered on the run, but at least it was flat. I only finished 1:15 behind Marty and won the women’s race which is always fun.  We tried to hang around for awards – they wait until the last finisher is done at this race which is ‘nice’ but makes for a very long morning at these pool swim seeded races.  We had to absolutely leave the race site at 11am as our babysitter had to get somewhere. They kept saying that awards would be soon! And probably after saying that 4 different times they finally started them at 10:50.  Marty and I thought we were good. Then they do the whole “we’re going to do something different this year and go oldest to youngest!” (which by the way, they did last year so it’s not really different).  I’m not sure when they did the overall’s but we unfortunately couldn’t stick around. Some friend’s picked up our awards and I won a free pair shoes from a running store – but the certificate expired in a month and our friends weren’t able to get it to us until a week before the expiration date. The store is in Fayetteville which isn’t all that close so I didn’t get my free pair shoes. I did email them but never got a response.  Oh well, no free shoes for me, and I probably won’t ever give my patronage to The Runner’s Spot if I do ever find myself down in Fayetteville.

Then: BOONE CAMP! The most wonderful time of the year.  It never disappoints and as usual this year was tons and tons of fun.  The whole crew got out to the rental house on Wednesday and we ate/drank/trained through Sunday. Most of us also fit in the Lake Hickory Triathlon on some very worn out legs but it was still a great time.  I definitely suffered from the Boone Camp Blues as we were packing up on Sunday. Until next year! 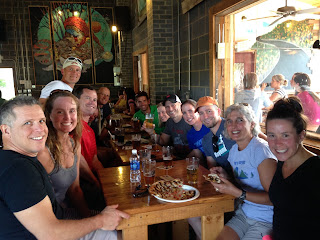 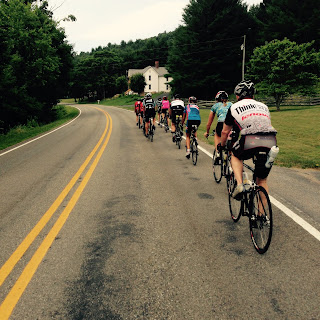 Logan is 3.5 years old now and boy is it fun. He can ride a bike! Like a real two-wheeler.  He started on a balance bike just after he was 2 and recently he was zooming all over neighborhood on it so we figured we might as well get him a real bike. First time on it and he’s golden.  He needed a little help starting and stopping but other than that he was riding away (and getting scared about how fast he was going). He’s getting the stopping down now and loves it.  I wish I had learned how to ride a bike like this! 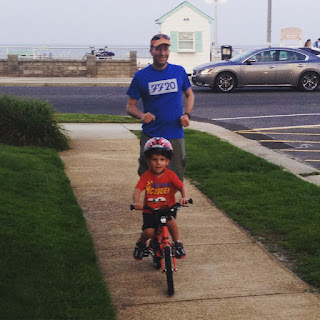 For the fourth of July we all drove up to just outside DC in Maryland to our friend Heather’s mom’s house.  Heather and her husband have 3 kids who Logan adores and the adults were all going to see the Foo Fighters at RFK stadium. OMG what a concert! Dave Grohl (lead singer) had fallen off of a stage in Europe and broken his leg just a few weeks earlier. It was a really bad break that required surgery and there was some speculation on whether they would have to cancel (they had to cancel the remaining concerts in Europe). NOPE – he came out on a Game of Throne’s style throne and totally rocked it with his purple casted leg propped up.  The concert was so great – I would see them over and over again.

We got back to Heather’s mom’s house very late, but Logan had had a grand old time with ‘grandma’ and all the Honnold kids.

Last week we had our second swim in the Triangle Swim Series at Jordan Lake: The Big Deuce and The Little Uno. I opted for The Little Uno (I was once again able to swim since I had some awesome volunteers to help with the late checkin’s).  I guess I took a good line because I ended up 3rd overall for females. I have also upped my swimming to a solid 1 (and sometimes 2!) times a week. And I wore a swim skin so all that helped.  Then I got to bike after with friends and I’m feeling like my fitness is maybe starting to turn around. I’ve got a couple more sprints on the docket and am hoping to hit them hard.

My mom came up for a visit for a week this past week which was incredibly helpful. Work has been crazy busy and besides the swim on Saturday we also ran a clinic on Sunday (so we didn’t have to pay for a babysitter – thanks, mom!). We also took her to a Durham Bulls game which is such a great time. The stadium is nice and the surrounding area at the American Tobacco Campus is very cool.  I think she admitted it was better than going to a Rays game in St. Pete :) 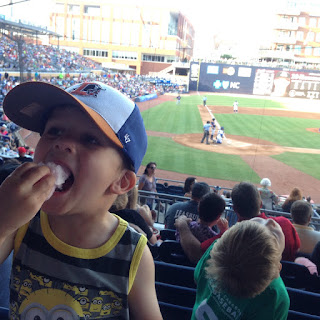 So yeah, there’s a long update. Off to Jersey next.

And it took me so long to actually post this that we are now BACK from the Jersey shore! More pics below. 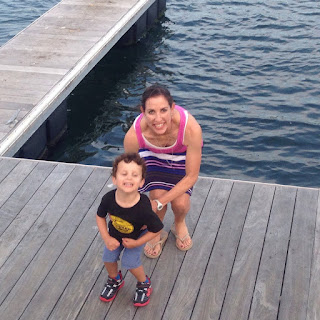