The Healthy Kids Running Series kicked off it's fall races this past weekend. Logan has done several of these now and absolutely loves it. He's still in the Pre-K division, 50 yard dash, and for the first time ever he won his race! It was awesome and he was so cute. 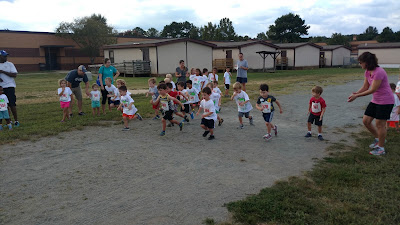 When he saw me after the race he said: "Mommy! I won!!" It was adorable. Then I tried to tell him that no matter how he finished I am proud of him for trying his best to which he replied, "Can I have some juice now?"  Hahahah.

The Blue Ridge Relay is a 200+ mile running relay that starts in Virginia and finishes in Asheville, NC. My friend Carrie has put together a team for something like 8 years and she talked me into joining in for this year. She had enough interest that she actually put together two teams: RunningJustAsFastAsWeCan and RunningJustAsFastAsWeCan2.  Everyone submitted a time to her and she divided us up so that hopefully we could stay somewhat near each other. This relay can be comprised of relay teams with as little as 4 people (completely insane) up to 12 people (wussies).  We had two teams of 9.  A good compromise.  When it was all said and done, I had run 23.7 miles over 4 different legs. 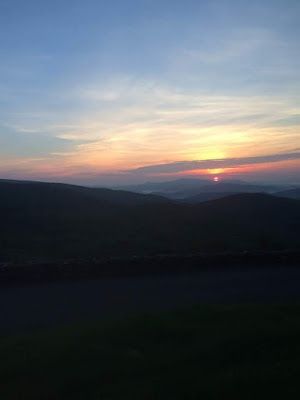 A few things:
I can't believe I'm saying this, but it was SO FUN!!! Talk about out of my comfort zone - 23.7 miles?? The scenery was gorgeous and our teams were beyond awesome. We weren't fast, but we were fun and the camaraderie was great. It's also nice to be a part of something so logistically challenging where I literally didn't have to do anything but show up. So huge thank you's to our team captain (Carrie) who made sure everything was set and ready to go and our driver (Andrew) who drove every step of the way unless he was running (also Ryan, the other van's driver who did the same thing).  The Blue Ridge Relay has continued to grow and this year there were 191 teams. Start times range from 5:00am until 1:30pm (slowest to fastest) based on submitted times. 10-15 teams start together in 30min increments. I was the 3rd of 9 runners on our team and my legs looked like this:
It was nice to be done early and be able to cheer on the rest of my team and eat whatever I wanted.  We finished just 15min back of our other team which is really pretty amazing when it's all said and done.  We started at 7:30am on Friday and finished at 2:45 on Saturday. It's amazing how fast it really goes, but you're either running, cheering, eating or driving and the time flies by.

We went to Mellow Mushroom after the finish then took a quick very well needed shower before checking out Green Man Brewery. I finally went to sleep at 9pm Saturday night, making that the longest ever stretch of awake time in my entire life (5am Friday to 9pm Saturday!). I can't wait to do it again next year :)