Literally the day after the American Triple T, I caught a cold.  Not too surprising as after an effort like that the immune system is down and it’s easy to pick up a bug. I was just thankful it waited until after the race! We celebrated my birthday that week and then had a nice long Memorial Day weekend.  I took most of the entire week off, save for one short easy bike ride and then a swim on Memorial Day with our master’s group.  There was lots of eating and drinking during this time.  Too many celebrations and lack of willpower equaled yummy desserts and beer much of the evenings.

The following weekend we drove down to a very hot and humid Charleston so Marty could do the Low Country Splash.  We stayed at a house with the Honnold clan and enjoyed the beach and downtown Charleston. I’ll be returning there for the 4th to meet up with some college friends – can’t wait for that!

The training front was fairly non-existent that 2nd week after the Triple T. I was not ever very sore from the races, but I was incredibly tired. And that lasted for longer than I expected. It was around this time that I told Marty I didn’t think I wanted to do the Three Little Pigs race on June 17th.  I’ve done it a couple of times, and although it is a fun, short sprint, it’s also usually very hot and I wasn’t feeling like I wanted to suffer through that, particularly with how rotten I was feeling on the fitness front at that point in time.  I had signed up early for a bargain basement price so didn’t feel that bad about not doing it.

The next week I started feeling better, but still wasn’t planning on racing. Truth be told, work had been very busy and stressful (I have taken a new internal position and the learning curve has been fast and steep) and thinking about training and racing was at the bottom of my list. I was enjoying my usual group workouts and hanging out with Logan and Marty and friends on the weekend.

The week of Three Little Pigs rolled around and we knew a ton of people doing it. The forecast looked unusually awesome for this time of year.  Then the last straw, Whit said he’d be happy to watch Logan during the race as he’d be there watching their 3 kids.  I had no more excuses and decided to go have fun, go as hard as I could on that day, and enjoy it all.

This is the best race to bring kids to. They have a big playground next to transition, a bounce house, lots of sidewalk chalk, free sno-cones, and after the race they open their kiddie pool which is awesome.

It’s a pool swim seeded start and my ‘time’ (which was a lie) had me going in 21st place.  This was unfortunately around 2min behind Carrie so chances of seeing her were slim. The whole thing would’ve been so much more fun if we had been able to start near each other.  Anyways, everything was fine.  I knew I needed to have lickety-split transitions and at the end of the day, that’s how I won.  Had Carrie had equal transitions, we would’ve been only seconds apart. As it was, I ended up 30 seconds ahead of her. But she doesn’t have nearly the sprint tri experience like I do. I did give her all of my secrets that evening so expect her transitions to be fast from now on.

Very quick race report:
I swam comfortable because the pool swims always seem to suck and I didn’t want to crush myself to get an extra few seconds.  I probably over-biked a little and paid for it the last mile of the run, but all in all it was a very tough race as I knew Carrie is super fast and wasn’t going to give up.  Marty had a solid day and finished second overall so we both got our big bad wolf trophies for another year. Logan had a blast with the Hughston’s, as usual, and then he legit swam in the kiddie pool after the race.

Here are random pictures to make this more interesting. 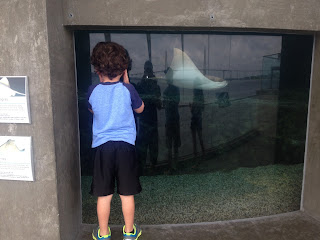