Okay, sort of. Tomorrow evening Marty and I are driving to Maggie Valley, NC (just west of Asheville) to stay at my dad’s cabin. There is a ski area just down the road that we’re going to check out on Saturday. 4 of our friends are joining us on Friday evening and it should be a fun weekend. They’ve actually gotten quite a bit of snow (see previous post about our NC winter – now I’m happy about it) out in the mountains of NC and they make a bunch of it, too, so it should actually be pretty good for some low key skiing. This place has 16 runs and 5 ski lifts. This ain’t Colorado! Here’s a picture of their trail map to give you an idea of how small it is. 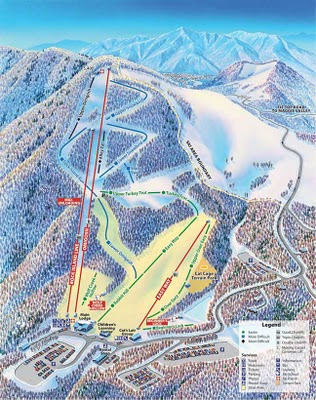 They have a tubing area which should be fun, too.

It’ll be nice to get away for the weekend on a mini vacation that’s relatively cheap (thanks, dad!)
Posted by BriGaal at 12:51 PM 5 comments:

I want to have a rambling, whiney, slightly incoherent blog about the weather. Here goes. 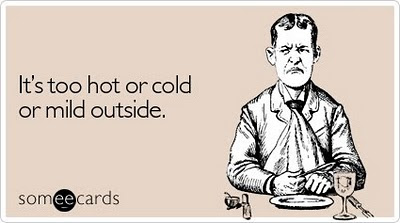 Yup, it’s cold. It may be colder where you are, but where I am it’s cold enough for me. Too cold if I’m being honest. Each year we’ve been here in NC it seems the winter has gotten a bit colder. Hopefully, this trend isn’t going continue. I really hate when the weather person says with a wry smile, “Normal high for us is 50 degrees, but today we’ll top out at 38!” (or 42 or something below 50 degrees causing me to snarl and give the tv the finger). In fact, we haven’t had many days this year that have hit 50 degrees. So the tv has seen lots of the finger. Poor tv.

Don’t get me wrong, I love it here. It would take a lot to get the two of us back to Florida (and when I say a lot, I mean pretty much never ever going to happen). And I realize that this is the nicest time to be in Florida: Jan – Mar. The other months aren’t worth it. Believe me, I know. I've done far too many hard run workouts at 4pm in August to even remotely believe that I won't have premature aging and/or skin cancer. But I still reserve the right to complain about the weather because this is my blog and what good are they if you can’t rant and rave once in awhile. So while I know that there were some tough souls that rode outside this weekend I was not one of them. My cut off is 40 degrees and the feels like temp was not really close to that. Now I realize that maybe some of you reading this are far up north and don’t really ever get to ride outside during these months, but here in the south we ARE used to riding almost all year long. Bundle up and your good to go. Not this year.

Running is a different story all together. I may grumble a bit as I start off but really you can get away with running when it’s cold and not have any issues. It’s really quite enjoyable to the heat.

And as Marty would say: That is all.
Posted by BriGaal at 2:51 PM 7 comments:

Due to the fact that I didn’t get my run in yesterday, I did it on the treadmill this morning at my work gym. It probably would’ve been better to do this yesterday but hindsight is 20-20; I was very tired yesterday after having not slept well the previous night and had some coaching work that needed to be done. After getting it done it was late and all I wanted to do was curl up with my latest teen fiction novel - The Mortal Instrument’s series for those interested (in teasing me). Anywho, I got up early to get to work and get that run in.

The thing is, I was supposed to do 6x400 in the midst of the run – not fast, but like a tempo/fast pace. This is sort of difficult on the treadmill, not to mention I always feel a bit self conscious doing workouts like this on the treadmill at work because I look crazy next to the lady who is walking slow up a slight incline. There are a lot of employee’s and I didn’t actually see anyone I knew (except for 1 person) but you do ‘see’ people around and I don’t want to be ‘that girl on the treadmill.’

Well, whatever. I got the workout done.

Then I get into the lockerroom to shower and change and realized I forgot my brush at home. Doh! So I just washed and dried my hair using my fingers to detangle --- and it looks better than normal. Go figure.

On the racing front, only sprints for the first half of the year. We aren’t doing St. Anthony’s this year (we’re trying to keep race travel to a minimum). This takes so much pressure off knowing I don’t have to be in awesome shape by the end of April. My first race will be sometime in April, but since it will be a sprint I’m not freaking out reading other people’s blogs who are really ramping up their training. I’m might do an Olympic distance at some point and then I’m toying with the idea of doing a late season half, but we’ll see how the summer goes.
Posted by BriGaal at 12:32 PM 3 comments:

Bad blogger - that would be me. I just haven't had inspiration that intersected time to write up anything interesting. You know how it goes - now you get a bulleted list.

I had Monday off of work and it was awesome. I wish I had more days like that! I skipped Master's so I could sleep in and have a leisurely breakfast while I read a book. Then I headed to the pool and did the workout by myself - I know the benefits of swimming with other's, particularly our Master's team but when the choice was getting up at 5:15 and getting up whenever when I'll be swimming with everyone every other time, well, the decision was a no-brainer for me :)

Plus, I got to swim in the warm pool! They have two lap swimming pools at TAC, a competition olympic sized one that is set at 'competition temperature' (for us non-swimming folks, that means cold), and a 25 yard pool that is a few degrees warmer. A few degrees makes a big difference! We hardly ever get to swim in that pool for Master's.

For lunch, Marty and I went into downtown Cary and ate at the Soda Fountain inside Ashworth Drugstore. This drugstore has been around for 50 years and they have a cute little Soda Fountain counter and a couple of booths. Typical Soda Fountain food - hot dogs, sandwiches, milkshakes - I'm a sucker for places like these. I had a grilled cheese and chocolate shake and Marty had a tuna melt AND a hot dog. 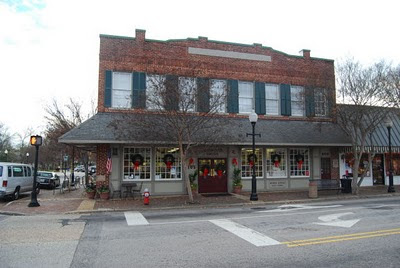 In the afternoon Marty, Tassie and I all went for a 5 mile run. I love days like these.
Posted by BriGaal at 8:56 AM 7 comments:

On the radio I heard the DJ say, "Happy Two Thousand Eleven!"

When we say dates from past centuries isn't it like that? Like when I say, "my great grandfather was born in 1901" which is something I admittedly don't say very often, don't you read that as "nineteen oh one?" You don't think nineteen hundred one.

I don't know why but for some reason this has always bothered me and I thought for sure when we hit 2010 we could finally shorten it. And I think a lot of people do say twenty ten. But you would still hear two thousand ten. So I'm making an official decree to call this year twenty eleven!

We stayed low key last night and went to dinner with friends before coming home and going to bed at 11pm. I know - LAME. I did wake up at midnight (hard not to with the fireworks) and then went right back to sleep. It was a good football day: Notre Dame, UCF and FSU all won.

This morning we got up and did a 5K at a local park then rode for 2 hrs a little later. I'm tired now.
Posted by BriGaal at 4:48 PM 3 comments: