Like I mentioned a few weeks ago, I signed up for the NC short course championship swim meet along with several other of our master’s team members. It was SO MUCH FUN!!! I had no idea how much a fun a swim meet could be! Although, I believe a lot of it was due to my teammates (some at the meet may have thought we were obnoxious, but I say we were just really excited).

It was held at the Hillsborough Sportsplex, which was about a 40min drive from our house. Heather met us to car pool over and we couldn’t stop talking about everything swimming related, from starts and turns, to relay configurations and seed times. Yep, we were big swimming dorks.

I did a triathlon at this pool a few years ago and remember the water being freezing, but luckily they turned the heater on because it was really quite pleasant. They had a ‘warm down’ pool which really was warm and perfect to slide into after a race. Plus, it was situated so that you could stand in the water and watch some of the races if you wanted.

Okay, so we get there and Marty had written down a warmup for us to do, then we all watched Alysia who was in the first event of the day, the 100 butterfly. I was so nervous for her! She did great and I’ll never forget the look on her face on her final turn – which was a cross between ‘how much air can I get and how much time can I rest on this wall' with 'oh shit what have I gotten myself into?’ She did a smokin’ 1:07.

My first event was the 200 girls medley relay. I was the anchor doing freestyle since all my strokes suck. We had a minor goggle debacle as Heather’s broke right when she was getting on the blocks. It all worked out as she got Marty’s on her head with about 2 seconds to spare. I did well on the anchor leg and even passed a girl to get us 3rd place! My dives were all smooth and I didn’t have any goggle problems. Although I did use two caps and had those goggles on so tight that I couldn’t move them…so I may have been walking around with my goggles over my eyes for quite awhile before my events ;) I am such a pretender!

My first real event of the day was the 50 freestyle. Here is a video of it – I’m in lane 1, closest to the camera. I won my heat with a time of 28.56! They seed all the heats based on the times you submit, slowest to fastest with the fastest swimmers in each heat in lane 4 & 5. Lane’s 1 & 8 are usually the slowest in the heat, so it was neat to win from Lane 1. At the end of the day, they tabulate the results based on your age group, so even though I was usually in one of the later (faster) heats, I was almost always last in my age group for the results (there were usually only 2-3 people in my age group in each event, and apparently they were mostly ‘real’ swimmers). But we won’t dwell on that…

Then I did the 200 free which was quite painful. I unfortunately didn’t hit the pad hard enough at the end and the backup timer didn’t push her button either, so the time they got for me wasn’t correct. Marty thinks I did a 2:17, they had me listed as a 2:19. That was it for me on Saturday, so I got to cheer everyone else on for the last few events. We have some really fast people on our team (Marty included) and it was neat to see them all killing it out there.

Afterwards, a bunch of us celebrated at Tyler’s Taproom in Durham. 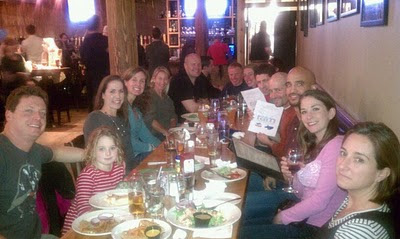 Sunday morning we were back at the pool, and this time I had the first event of the day, the 50 butterfly. And I was in the 2nd heat since my seed time was slow. I hardly ever do butterfly and was honestly worried I wouldn’t be able to finish it! But I did fine, finishing in :35.01 and winning my heat again. Here is video of this race if you’re interested (my sister really wanted video of this, I think to tease me, but my form really isn’t that bad. I’m just slow). I’m in Lane 5 in this one, in the white and black suit.

After this we did a mixed (men/women) 200 free relay. Then I did the 100 free and was happy with my 1:02.7. That one really hurt, too. Alysia did 1:00, even though she stopped halfway through her first lap to fix her goggles! Stud.

I ended with a girls 200 free relay – thank you to Jennifer for coming out on Sunday so we could field a girls team! The relays were a blast.

Marty had some crazy fast times, but I think the best/funniest was his 100 free. He was all the way in lane 8, and unfortunately the next 3 lanes all scratched so he really was by himself over there. He did a 53.5 which we were all super impressed by and then we were all laughing because he could barely move when he got out of the pool – he was all hunched over and barely shuffling. I thought he might need a med tent or something! He rallied and did a great leadoff leg in the guys 200 free relay (24.9) then survived the 500 free where he averaged under 1:05 per 100 yards. Freak.

But you know, we had a bunch of triathletes on our team so what do we do after a 2 day swim meet? Go for a 46 mile bike ride! I found a great course that had some rolling hills and very little traffic and several us finished the day outside in the sun.

"which was a cross between ‘how much air can I get and how much time can I rest on this wall with oh shit what have a I gotten myself into?’"

Look at you fly through the pool! Awesome job!

Those are some crazy fast times in my book 2:17 or 2:19.. wicked fast Bri! Nice job! Glad you had a fun meet! I'm too scared to do one, but maybe someday when I get to be a fast swimmer!!