I don't care about the Royal Wedding. Good for them, and I wish them the best, but it's seriously ridiculous the amount of coverage it's getting. I care enough to look at a few pictures of her dress and then say, "eh, that's pretty...next" Also, I guess she married 'up' since she is marrying the future King (uh, whatever that means, by the way) but let's face it, William definitely married up in the looks department! Good job there, lad!

I also don't like American Idol. There, I said it. I get very bored watching people sing. I also don't like any show similar to it, like Dancing with the Stars or whatever new one that is out. Anyways, American Idol is on my mind because apparently some girl that went to my high school before I was there is a good musician and she has been in the 'horn section' on American Idol the past few times. I know this because I'm part of my high school's alumni group on facebook and we get LOTS of updates telling us she'll be on there.

Easter was nice. We went on a bike ride and ended up at an intersection when the IOSDT group rode by. So we turned and went with them for awhile. The ride went so fast because all I did was chat with Erin the entire time. Before I knew it, Marty and I were turning around to head home. It was sunny and hot and many got burned (not us, because Marty is sort of nazi-ish about sunscreen. too much time spent in the Florida sun without any has made us both more conscious of it)

Then we cleaned up for Easter lunch at the Lovgren's. It's becoming tradition - the Lovgren's, Ledford's and Gaal's get together for Holiday feasts. Here we are at Thanksgiving this past year: 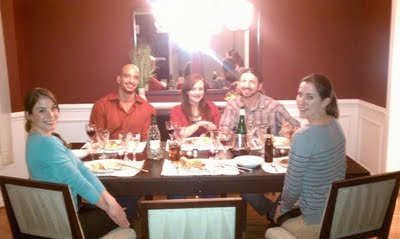 Marty in the mirror taking the picture

And Alysia taking the Easter picture - she did a better job of making sure she got in the picture. 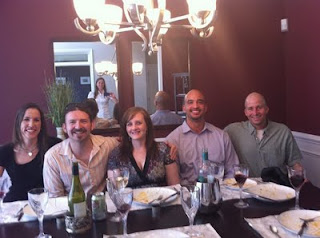 And here are the girls, I was squatting a bit so I didn't look like a giant. 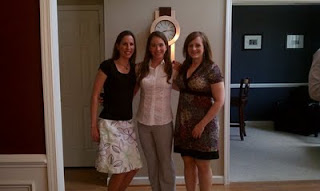 After Easter lunch we met more friends for dinner - and Tassie came too! Unfortunately, it was windy and the awnings above our table were blowing so of course Tassie was scared. Crouched and trembling...scary awnings!

Are you tired of me talking yet? I would be remiss if I didn't mention St. Anthony's. This is the first weekend in a long time (not counting the year we were overseas) that we won't be down in Florida racing. Like I mentioned in a previous post, I'm actually quite glad about this. It was nice not to have to worry about hardcore training early on in the year. Everyone shows up to that race in incredible shape and it was refreshing not having that hanging over my head this time. I will miss seeing all of our friends and family down there, though.

Oh my - Roxy would be so scared of an awning on a windy day. Silly dogs.

I've watched American Idol like two times (and fell asleep both times) and have never watched any of the dancing shows, etc... Just not a fan like you said!

they make a big deal cause she is in the HORN section. are you kidding? dont knock DWTS. my boy hines is kicking ass on that show! ha.

I hate Idol nearly as much as DWTS. Sorry Kari.
Yawn.
I'm a sunscreen Nazi too- good for you:)