Big weekend for Tassie - she has her annual run at the Umstead Coalition Run tomorrow morning. Last year she was first doggie and 2nd female overall in a time of 28:45 (it's a 4 mile hilly bridle trail run). Hopefully the weather holds out because right now they're calling for showers and storms.

Right after that we're putting on one our quarterly swim clinics. Busy Saturday, for sure.

This week was monumental in that we bought a new car! We traded in my Xterra, which I've had since 1999. Great car, but it was time to put it to bed. Marty got a quote from Carmax for the Xterra earlier in the week and we were shocked at what they were going to give us. Lucky for us the quote is good for 7 days because not 2 days later the ABS light came on!

Here I am saying my final good-byes to my car. 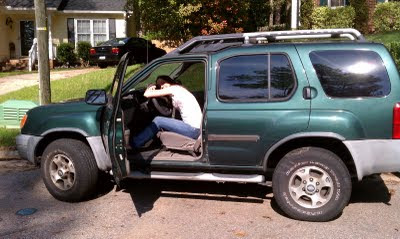 It's sort of hard to hug an SUV: 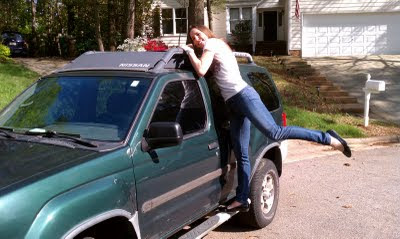 We got a Kia Sportage, which feels like a Lexus compared to the bare bones that first year model of the Xterra was. 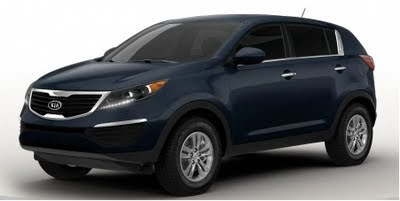 why is there no first OAD award? that is "first overall dog"? tassie is getting robbed...