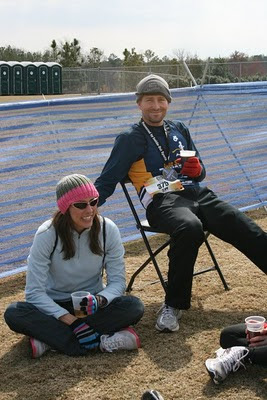 Sunday morning I cheered Marty and many others on at the Tobacco Road Half and Full Marathon. They really lucked out with the weather. All week the forecasters kept on saying that Sunday would be cool with the highs for the day only reaching the 60’s. I never believed them, particularly when Saturday was 80 degrees and sunny (beautiful day for a brick, I might add!) But sure enough, Sunday was gray and cool; perfect for the racers.

I don’t think I’ve ever just watched a marathon before, but I have lots of long distance spectating under my belt (8 IM’s – 5 of Marty’s and 3 others that we just went to watch and cheer) so I know the things I need to bring to keep myself occupied and fed.

I drove Marty, Sam and her husband to the ballpark where the races started and finished. No troubles parking, although we hear that was an issue for others. I decided to bring my mountain bike so I could ride over to one of the trail crossings that was also fairly close to another part of the course so I could see everyone multiple times. It was only about a 2 mile ride to the spot and well worth it instead of just watching the start and finish. But oh man was it COLD getting over there. I was wearing jeans and a fleece with a hoodie, but definitely was not dressed for cold weather riding. I warmed up while standing on the trail waiting for the half marathoners and got to cheer for tons of friends while out there. Then I zipped over to my other spot to watch the leaders of the half make the turn for the final 1.5 miles before racing back to the trail to see the marathoners. After seeing Marty (looking very relaxed) I went back AGAIN to the late turn where I was now super chilled but luckily had Jennifer with me to complain and hop around with. Watched a bunch of marathoners come through, some looking strong and others dying that slow death before seeing Marty who was just trucking on by people. He negative split the marathon – who does that?! I got back on my bike and made it to the finish a few minutes before he got there.

I know I didn’t run a half marathon or marathon but man was I exhausted that afternoon! I was pretty much a slug on the couch watching basketball for the rest of the day.

Speaking of basketball – my bracket is completely hosed. I swear I was on the losing end of almost every close game, and I think I lost every game Sunday night. Like I said in my last post, I had Notre Dame going to the finals but then they went and lost to FSU. I usually cheer for FSU but not against Notre Dame. This is what my facebook profile picture looked like Sunday – 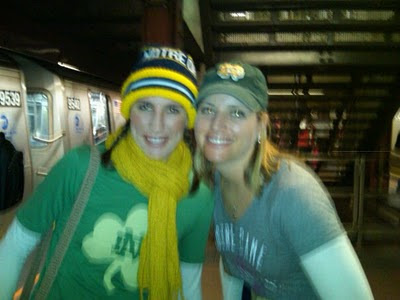 That's me and my sister waiting for the subway in NYC to go to the Notre Dame v Army game last fall.

And then quickly on Monday I changed it to this – 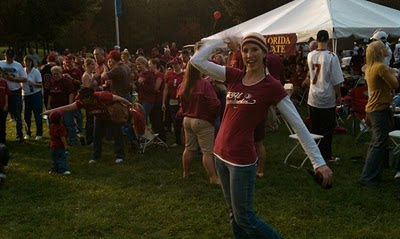 Tomahock Chopping at the FSU tailgate when they played at NC State.

So now that my bracket is so bad, I’ve moved onto just cheering for the teams I want to win rather than those I’ve picked. So go BYU and FSU!
Posted by BriGaal at 10:28 AM

lol, I love the change of "costumes" Congrats again to Marty, I think that was a heck of a race.