Several weeks ago, the Gautreau’s told me about a 5K that was about 2 hrs away that had prize money and hardly anyone was signed up. But then I strained my calf so wasn’t running hardly at all so I could give it some rest. Last weekend I ran for 40 minutes and didn’t feel any pain and thought maybe I could still do the race. The entry list was still very small. I did a workout on Tuesday to see if I had any fitness left and it went pretty good so I decided to go for it. I didn’t have anything else better to do Saturday morning!

Not surprisingly, others caught wind of this race and some fast people showed up. I snuck in for 3rd place and the last money spot ($100) so all was not lost. My first mile was 6:15, my second mile was 6:15, and my third mile was 6:15! (total was 19:20) How’s that for consistency?! The speed is always the first thing to go and I could definitely feel it – no other gears except for the one I was running in. I’m pretty happy with that time, actually, for the amount I’ve been running. On the men’s side, holy crap did the fast guys show up! Here were the top 5 times: 14:09, 14:09, 14:41, 14:49, 14:58. It was kind of funny at the start – the race only had 70 competitors but the lineup was all these crazy fast guys. The race was held in a small town in the middle of nowhere. This was the first time for the event and the town really got into it. I don’t think they have any idea how fast those times are for a road race…probably one of the fastest fields for any 5K in the country that morning! Results

Marty had a successful morning with his cross country team at the regional meet. He had the overall girls and boys winners and both teams finished second, qualifying them for the state meet next weekend.

On Sunday, Marty geared up for a local 5k, the Monster Dash, in Raleigh. It was a gorgeous day so we decided to ride our mountain bikes to the race. Kari tagged along and we had fun cheering for the competitors, who were all encouraged to dress up. A lot of dogs were also dressed up. This poor thing was mother goose. 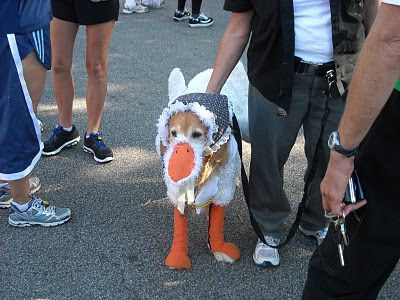 Here we are waiting for the finishers. 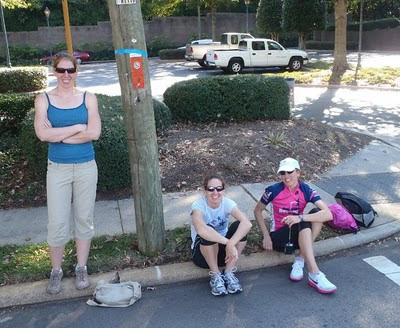 A) Superman
B) Bald guy in pajama’s 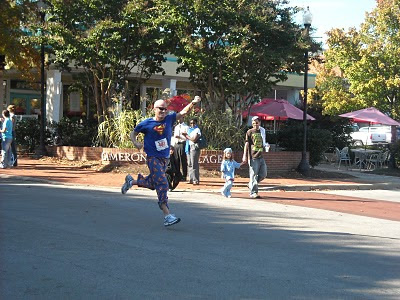 This gorilla chased the banana the entire race. That night we went to a pseudo-halloween football party at the Mayhew’s. We all dressed up, then watched the official Doughman DVD that had been reedited with music and graphics. Then we kind of watched the football game while stuffing our faces with yummy food. 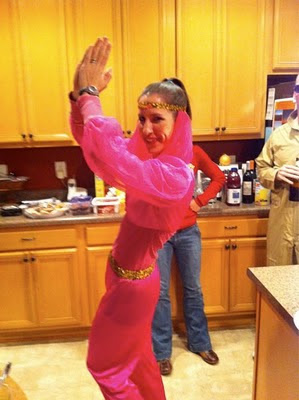 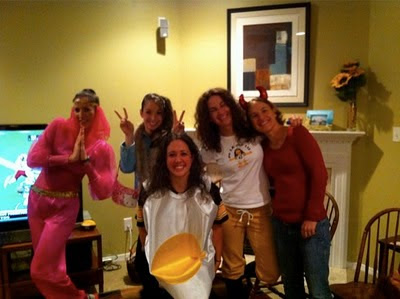 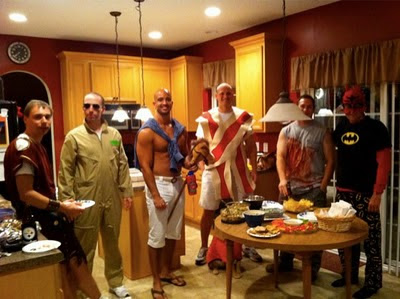 Congrats Bri! Laying it on thick and takin home the cash! Congrats!! Glad your calf is feeling better.

Great race Bri! I have to laugh - the cash purse always brings the fasties out of the wood-work! I like the gorilla chasing the banana... ;)

Wow! That is consistent! Congrats! I love the mother goose costume on that dog although it sure looks like torture :)