Saturday morning Marty and I drove to the booming metropolis of Sims. I shouldn’t make fun, we are so lucky to have so many races within easy driving distance of us. And this race was in a great location for a triathlon. Marty was going to try and defend his title at the Battle of Buckhorn – he did and won another belt buckle (although it’s on backorder so he won’t get it for a couple of weeks). I did the swim on a relay and tried to swim hard. The 1,000 meter swim was a bit short and it was wetsuit legal; I came in at 12:40 and first in the wave. This would have put me right with the main pack of boys had I been in that wave (Marty killed everyone on the swim, then there was everyone else). After I swam I ran the opposite direction of the bike so I could see the guys coming in. I have to be honest and admit that I wasn’t all that positive that Marty was going to hold on since he only had about 1min on the next guy when I saw him near the end of the bike. I completely miscalculated my out and back run and realized when I turned around that if I didn’t pick it up (like really pick it up), I was going to miss the finish. I ended up getting back just in time to see Marty making the last turn, so I had enough time to scream “GO MARTY KICK IT IN TURN IT OVER!!!!” :)

When I did a warmup on the swim I realized the lake had some gross dirty film and apparently I was paranoid about this as I exited the swim. You know, didn’t want the pictures to show I had brown on my face. Instead it looks like I’m throwing up. 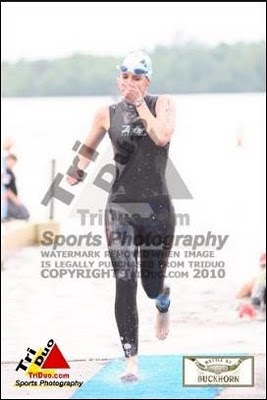 Also, Tassie has a facebook page. Marty made it for her because “I wanted to be able to tag her in pictures” I told him he could tag her without her having a page, but “I wanted people to be able to click on her name.” Okay, but it is pretty funny. I was on her page editing something and I got some warning about her information showing up on the internet and making sure I have the appropriate privacy settings. I thought, oh yeah! I totally need to adjust her privacy settings before realizing I must be insanely stupid because

a) Who would be googling ‘Tassie Gaal’
b) Why would it matter? (uh, for that job interview she has? Wouldn’t want questionable pictures showing up…)

We also had another fun master’s get together on Saturday night – dinner and clubbing. Marty and I only made it through the dinner but rumor has it that at the club there was a dance-off and the worm…

Sunday was a 50 mile ride in between the rain, then some lazing around. I finished the night with my sister performing minor surgery on my heel as I had a piece of glass embedded in it (ummm, ow) and then some Goodberry’s. YUM.
Posted by BriGaal at 1:17 PM

Sounds like a fun weekend!! Love the barf pic!! :)

There was definitely some worm action on the dance floor!!! Next time it'll be you!