Tomorrow I’m doing the swim portion of the Battle at Buckhorn with a fellow OSB athlete who hurt her shoulder and can’t swim until after surgery and rehab. I told her I would be happy to do a relay with her since I was lukewarm about racing already with how my foot had been acting recently. I think I would’ve been fine, but instead I’ll get a nice swim and probably run right after. And relays are fun. Marty’s going to try and defend his title so he can win another one of these: 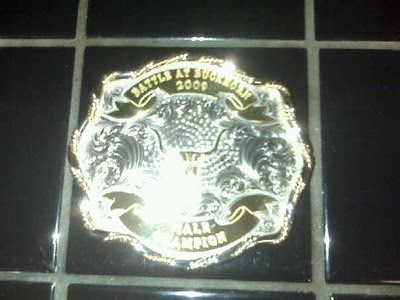 Last night we had training session #2 for the Doughman (I missed training session #1 last week because we were driving to the mountains, but you can check out pictures from that one here). Let it be known – I’m the weak link for the eating portion of this event. I kind of thought I would be, but I’m actually even worse than anyone thought. We ate 3 slices of pizza; it took Kari and Alysia 3:30, it took me 5:00. And they were laughing and talking the whole time (I wasn’t) and Alysia left once to run upstairs to get her camera. I did throw down a 6:00 mile immediately after, but I’m sure there are guys who are going to out-eat me by a lot. Think I can improve my eating time in one week?
Posted by BriGaal at 10:35 AM

You need an ice cream and cake division! Mom

I am now seriously irritated with myself....thought I had changed your blog address on my blog scroll only to have failed. I missed several more posts but am now caught back up:)!!! Glad to see your foot is feeling a little better. And happy belated anniversary!!! I will have your address fixed tmrw--no worries!!

And yeah...6:00 mile after 2 weeks off is pretty impresive. So glad I can brag about you to my running partners;)