Saturday morning started with a bang, or more like a scream, from Junior Awesome's room at 3:00am.  I don't know what woke him up but I have a theory that when he wakes up he doesn't know if it's 3 in the morning or 7 in the morning, he just knows that his next move is to scream for us. His room is really dark at all times, maybe we need to change that? Anyways, I got up with him and when I realized we were both sitting on the couch like zombies I turned and asked him, "Do you want to go night-night?" He looked at me, slid off the couch and walked to the stairs saying, "night night, night night" I put him back in his crib and that was that. Until 4:30am when he did it again. We were getting up at 5:15 anyways, but this made for not great sleep for the two of us. And what do we do about these early morning wake ups that he clearly is not intending for (babysitter said he was so tired that he took a nap from 7am-9am!) Parent advice wanted.

We were getting up early for our last event in the Triangle Open Water swim series. There was a front pushing through so it was quite chilly and very windy. The water temperature was still in the 80's as there hadn't been enough time for it to drop yet, so no wetsuits. The water was quite choppy - but this is what makes open water swimming challenging! I've said it before and I'll say it again, if you want flat calm water where you can see perfectly, go do a swim meet.

This did not stop 'swimmer Bri' from coming out when I was getting in the water. She is whiny with a bad attitude. Many friends have dealt with her before (how to deal with her: ignore her but never, ever splash her). She disappeared once the gun went off. I mainly used this race as a workout since I haven't been swimming much and I have one last triathlon next weekend. I figured I'm going to cram some workouts in and hope that it's wetsuit legal on Saturday.

After announcing awards (not my favorite thing to do, deep down I'm an introvert) and cleaning up - and once again, thanks for all my OSB volunteers. You guys rock. Hard. So after all that I went for an hour bike ride. I'll be on a beach cruiser next weekend in the race, but I figured I do need to ride a couple of times to make sure all fitness has not been lost.

Sunday morning, Marty went and killed the swim/bike (Aquabike division) at the Finish Strong half iron distance. Logan and I hung out and I tried to keep my running around with him to a minimum. We still went shopping and to a park, but he also got to watch a few episodes of Elmo which we usually try to keep to a minimum at home. But his number one favorite thing to do right now is chase me or Marty around a loop through our kitchen/dining/living room area, and when he kept asking for me to do that with him I asked, "how about we watch Elmo instead and mama can sit here and relax for 20min?"  He was very amenable to this suggestion.

The reason why I wanted to sit at least for a little while after park playing was because of the Magnificent Mile at 2:20pm in downtown Raleigh.

Kari volunteered to be my sherpa which was awesome because going solo wouldn't have been very fun. Timing was prime nap time for Logan so Marty stayed home with him (and don't think I was fooled, I knew this was also prime nap time for Marty, too). Kari was so awesome and warmed up with me even though she had already also done the aquabike that morning, and run a little after, and done the swim the previous morning, and helped at our packet pickup AND the Finish Strong half packet pickup!!! Then she held my stuff and gave me encouraging words and told me that, no my foot wasn't hurting and I was going to do great and oh I love that girl.

Men went at 2:00pm which I didn't get to see because I was busy doing drills and strides and anything else I could think of that would get me properly warmed up for this effort. But the guy who won did a 4:09. Not bad.

They say this is a flat/fast course, and it is flat...but not as flat as you can get in other places. Downtown Raleigh is not really flat anywhere so this was as good as it gets. The course was a slight incline towards the Capitol, a tight box where you could run 2 good tangents and 2 very hard lefts, and then 400 meters to the finish. I lined up behind the roped off area for the really fast girls but really wanted to figure out how to get in there because instead I was surrounded by little girls and people I knew would get in my way. When they dropped the rope I tried my best to elbow close to the front.

The gun went off and as much as I didn't want to go out too fast, it was inevitable in this type of race. And it's not like there is a lot of time to make any grand moves if you go out too slow. And for what it's worth, I passed people all up to 3/4 of a mile and no one passed me the entire time, so maybe I did need to get out faster. Buuuuut, I don't think it would've been physically possible for me to go any faster at the beginning. The start was crowded and I was super worried about getting tripped/running over some little girl. Anyways, went through half way in 2:38. I knew I wasn't going to hold that pace and it was all about hanging on the best I could. I ended up finishing in 5:26 - 15th overall and my throat and lungs were burning so bad that I was coughing for a solid 30min afterwards. I think Kari probably wanted to kill me.

Here is a picture towards the end that she took. Because of the angle and shadowing it looks like I have a chest - she is a true miracle worker. 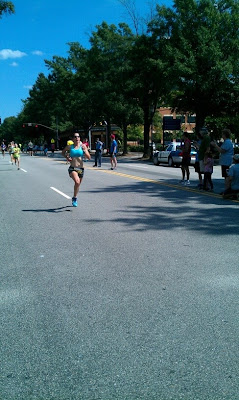 I dropped that little girl behind me with 400 to go. I'm really good at dropping little kids in races.
Posted by BriGaal at 10:35 AM