5K Battle to the line

An epic battle took place at the Cary Road Race this past Saturday.

Held at the Koko Booth Amphitheatre, covered in a yellow dusting of pollen, it was a beautiful North Carolina morning.


The morning started with Logan beating Marty (again!) in the 10K.
﻿ ﻿
Then it was my turn. Of course, being the wimp that I am, I chose to do the 5K. Scratch that. I got an email from Marty earlier in the week telling me he had signed me up for a 5K that weekend. Kudos to him for not even asking if I wanted to do the 10K.

As is typical at a local road race, the kids were out in full force. They all lined up in front, despite the announcer's pleas to move back, but it was no matter to me. I knew they would go out faster then I could. The trick was dodging the carnage after 400 yards.  I did pretty well, only running into one before I set my sights on the rest of the pack.


The last little kid was caught around mile 1. I figured I would drop him fairly quickly, thinking he had gone out too fast.
﻿
He had the last laugh, as he came barreling down the hill to repass me.﻿
I re-repassed my adversary at the 2 mile mark and continued to hold onto the pace around the lake. Cute Kid could not be shaken. This was not good. I did not want to get into a sprint finish with Cute Kid. Not only would that probably not end well for me, I also didn't want to be the douche trying to outsprint a 10 year old.

Logan gave me the thumbs up for a race well run. 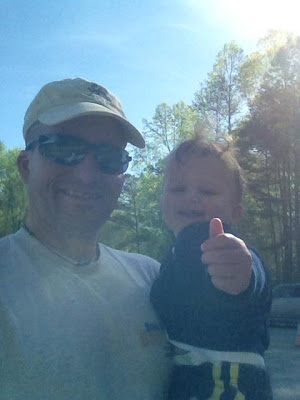 ﻿
﻿My time was not very good, but, I didn't have Mary to chase this weekend.

Later, Marty and I took a nap while Logan went grocery shopping. 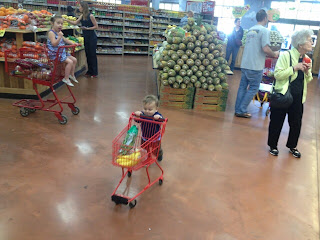 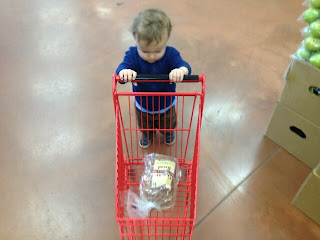 This whole post made me laugh. Great job. And I can't believe you are racing in a sports bra. I raced in a hat and gloves and layers on Saturday.