In recent years it's become not so surprising when race directors will elect to cancel or shorten swims due to wind/waves/dangerous conditions. Just this year it's already happened at two very large races (New Orleans 70.3 & St. Anthony's). Now I wasn't there so cannot speak to the conditions themselves, but what I can say is I don't remember swims EVER being cancelled in the 80's and 90's.

It's sort of like when you remember back to being a kid and all the stupid things you did playing around and can't believe you did them without being hurt or killed. Nowadays kids don't go outside unless they are swaddled up in padding and anti-germ fighting creams and definitely not by themselves.

I realize that we live in a litigating society where liability is everything. And triathlon has grown so much that the abilities of the athletes runs a very wide spectrum -- and of course swimming is going to be the most dangerous and least skillful part of the race for most newbies.

As long as traffic behaves itself.

It just reminds me of my very first ocean swim in a triathlon and how there's no way it would have gone off in this day and age.

I was 11 and competing in one of the Bud Light Sprint triathlons in 1989. This one happened to be in Jupiter, Florida and the distances were (probably) 1/2 mile swim, 15 mile bike, 5K run. I had done a bunch of youth triathlons by this point and a handful of sprint triathlons, but these were in calm, Florida lakes (yeah, probably alligator infested, but they don't really want to bother you).

I was a competent swimmer, but by no means strong. In fact, I hated swim practice and did everything I could to get out of it during my summer swim league days. All I wanted to do was run.

So the race -- Hurricane Hugo was busy churning up the Atlantic and the waves were BIG. Like, really BIG.

I think my dad was second guessing himself as two of his daughters were getting tossed around in the ocean while many adults couldn't make it past the breakers and fight the current.

Apparently, I was out there for a very long time. My sister ran out of the water into transition and my dad yelled/asked her if she had seen me. To which my sister probably replied something along the lines of, "As if. Why would I be looking for her?"

I finally came out of the water and my dad yelled, "Are you okay??!!" And I responded with something along the lines of, "It was so fun!! I got barrel-rolled 3 times!!"

Also, to be 11 and not feel the need to change out of your swimsuit for the remainder of the day and the 3.5hr drive home. When I did finally take it off to shower, I found a little minnow stuck to my stomach!

Here's a picture of me from back in the day before some triathlon. Quite possibly the one I'm talking about, who knows. 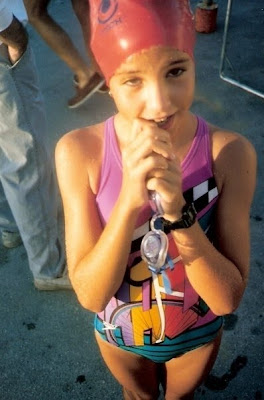 I get frustrated with how many swims are cancelled now (more and more I'm so fearful every race I do that the swim will be cancelled!) but I understand that it's probably only going to get worse so I better get used to it. Maybe I should stop swimming so much in practice. :)

so many thoughts: A- like the trampolines with the BIG wire springs sticking out? and holes where you would lose appendages? B- you ARE a real swimmer, umm hello summer league? C- nice suit, so 80s with the checkerboard and bright prints.

I know what you mean. I actually had a quick talk with the head offical after the race and he said these RD's have to also "babysit" now because many people come in unprepared to swim and they just can't take a chance. What a bummer. I've been putting SO much time into the pool, I woudl have liked to see how I would do! O well! LOVE that pic of you..so cute. I can't believe you were that young and out there in the waves! Awesome!

It is due to the sue happy never take responsibility for yourself society we live in today and the influx of unprepared swimmers entering races. I think they should make it a requirement that an open water or continuous pool swim of a certain length (that is witnessed by a certified person like a masters swim coach) be required before entering an event. But it seems it is much better to cancel a swim then refuse someones entry fee because they are not ready to race.

been away a bit, but loved this post. :) As usual no words of wisdom, but just saying I was here. :)

I think it's cause they're pushing the sport to grow and grow, which means it has to grow into people that aren't prepared. and RDs aren't going to say no to that or encourage people to, i dunno, train more first, because they need the reg numbers. So, we end up with people who are massively unprepared and now every race is worried there's is going to be the race someone dies on the swim. so.