We had our last open water swim race of the year on Saturday morning. We were planning on me bringing Logan and saving $$ on a babysitter since as of one week prior the participant list was low. Then all of the sudden *poof* a bunch of people entered and 'Um hi, Saint Rita, I know it's Friday afternoon but want to come watch Logan starting at 5:45 am tomorrow?'

Now I was fully in charge of check in which meant I got to delegate who got to do what. Since all of my volunteers are nice and happy they say, "Put me wherever." Except for the ones that are on to me (I got a: I'm not doing t-shirts this time! from one saavy volunteer). I happily did body marking which is the easiest station - no questions or arguments just strip down and let me draw on your biceps.

I really liked the shirt. 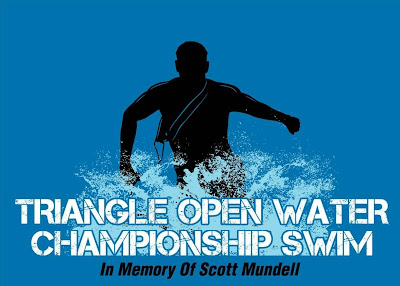 That's a silouhette of Scott Mundell running out of the ocean. He was a good friend and teammate of Marty's at FSU who died from complications due to a brain tumor 10 years ago.﻿

I didn't swim. I could've, but I seriously didn't think about it since the entire time I thought I would have Logan with me. When someone asked why I wasn't swimming I realized I'm not all that smart sometimes.

I ended up watching the exciting finishes and cutting the chip bands off of people's ankles. I didn't like this job and will be delegating this one in the future, also. I hate feet and I was way too close to people's feet. No surprise, but most women's feet are much nicer than men's. And hairy ankles - ewww.

So I high tailed it out of there and left Heidi alone to get the chips when Marty told me to announce awards. Until I realized I had to be on a mic and have everyone stare at me. This is not my cup of tea. BUT it does outweigh feet so the awards were read.

We had a Master's swim team party that night where I was talked into doing a long run Sunday morning at 5:30 am.  It was surprisingly awesome running at Umstead in the dark that early in the morning. I ran for 1hr30min and it flew by. And THEN, because I was taunted on facebook, I woke up this morning and went to Master's practice. Marty doesn't coach this one so he could stay home and be on Logan patrol. Except Logan woke up right before I was going to get up so I fed him and coaxed him back to sleep making me late. But still. Boo. Yah.

And Logan had his 9 month checkup which was really his 9.5+ month checkup since it got postponed due to him being sick. But because he was sick he had lost some weight so his stats are off (in my opinion). 23.5% in weight, 83% in height.  He is on an eating spree now and loves real food much more than baby food. He will pretty much eat anything we give him, although he does seem to have some allergies/sensitivies to some things (like eggs, and maybe some others). Nothing too serious; he just gets a bit red around his mouth. He also has been waking up in the middle of the night hungry - argh this never ends. You go from not getting woken up for weeks to this. Anyways, I don't really mind when he does drink a bunch if he wakes up - it's if he wakes up and doesn't want to eat. Then I'm all, dude, WTF. The hard part for me is falling back asleep after. He drinks himself into a coma and I'm lying in bed wide awake.
Posted by BriGaal at 2:58 PM