It's so true that you really appreciate your health when you're not feeling well. Things got weird on Wednesday. I was feeling, there's no other way to describe it, 'off.' I drove to Umstead to do a run workout and when I got out of my car I had this overwhelming desire to NOT run. It was a beautiful day and I didn't have time to workout the day before so there was no reason for this. But then I started running and it went downhill fast. I was having bad chest pains, not really crampy pains but something totally different and I was just not feeling good. After 5min I turned around and walk/jogged back to my car. This is so not like me! It was almost like I was on auto-pilot. I went home and set up on the couch with my computer. I was fortunate enough to be able to work from home that day.

Thursday morning I woke not feeling any better. I went into work and by noon I was shivering so badly and feeling so horrible that I decided to call it a day. I went home and bundled up, got under the covers and turned the heat on. I had my work computer set up next to me so I could answer any urgent emails. I knew I had a fever and doing all this was not going to help but I was so cold! Marty got home in the afternoon (he had been down in Miami for a couple of days) and took my temperature: 102.8! No wonder I felt so crummy.

I really wish there was some way to take a bunch of drugs that will knock you out when you're feeling like this. They always say rest and fluids are the most important things, so I say, put me under with an IV drip so I don't have to actually feel all this and not be able to rest or get any fluids down. Michael Jackson's doctor was onto something (minus the dying part).

Now I am on day 4 of no working out, and I'm totally turning into that athlete that is all "OMG I'm am so slow and out of shape and my races are going to be horrible and why bother blah blah blah" It does sort of stink that I am signed up for a 10K next weekend. I'll still do it but I'll definitely have to adjust the goals.

I took him to a local pumpkin patch last weekend (Marty was down in Wilmington cheering for people at B2B). I could not for the life of me get this kid to look at me and smile! It was like he was going out of his way to not look at me. And when he did, he would have the most ridiculous look on his face, as you'll see. In his defense, he was pretty tired and ended up taking 5hrs worth of naps (!) He doesn't nap well at daycare and seems to want to catch up on the weekends. 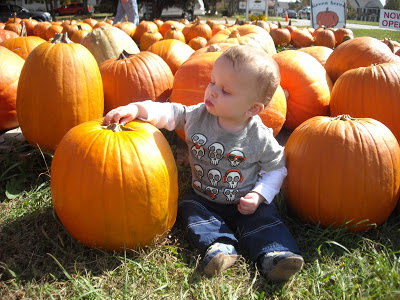 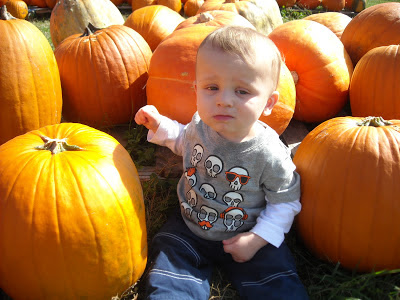 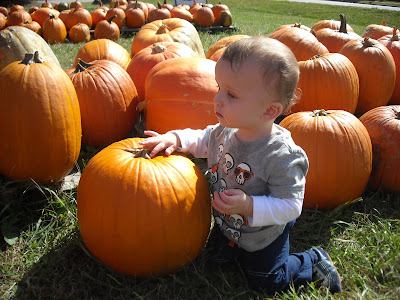 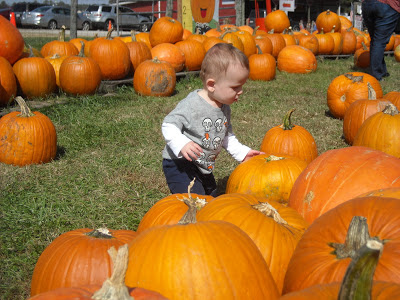 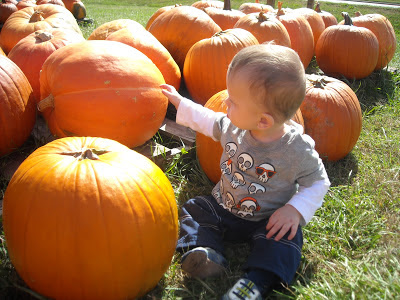 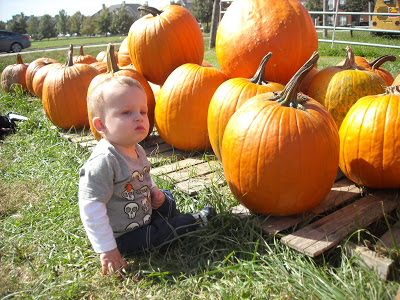 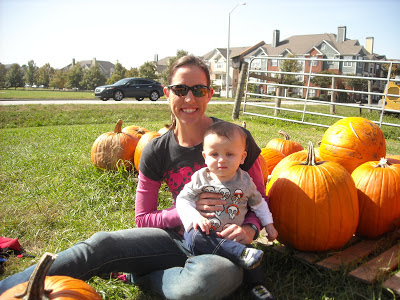 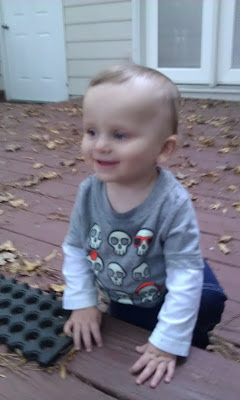 He was very excited the other night when he was eating 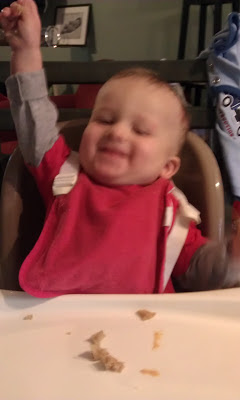 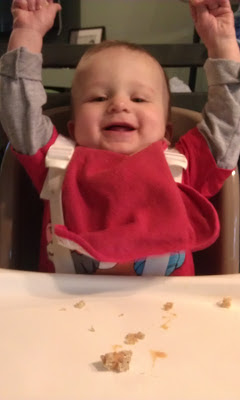 That sucks about getting sick. Hope you feel better quickly. Sounds like an ugly one.

Those are great candid pictures of Logan! Shows him interested in the pumpkins. And wondering!

I hope you feel better soon, too. No fun at all to be so sick!