Packing for a trip with a 10 month old is no joke. I felt like I was packing for two days straight. I am told it does get easier as they get a little older - right now you have to think of all sorts of contingencies while traveling (hunger, diaper changes, toys, extra outfits, etc etc). I love flying Southwest; everything just seems so much easier with them. Unfortunately, Southwest doesn't yet fly into Pensacola so we were on Delta, with a layover in Atlanta. I swear, their 'zone' boarding takes 3 times as long as Southwest.

Logan was spoiled rotten by my sister and her family while Marty and I went to Tallahassee for the weekend. I'm pretty sure they liked him, but he's very hard not to like :)

In Tallahassee we got to reunite with our Aussie friends, John and Bron. They were featured heavily in Trippin' 06 (our trip around the world where we hung out in Australia for 4 months, 2 weeks of which was at there house). Bron brought Logan a kangaroo stuffed animal which will be hard to keep away from Tassie. She also brought me two bags of TimTams and a very cute Lorna Jane running top. 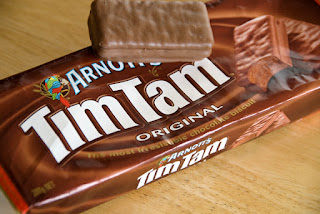 We had a lot of fun in Tallahassee, reuniting with Marty's former teammates for a swimming reunion. At the game, they were recognized on the field during a timeout and they let the wives and kids go down there, too. So neat to be on the field in a packed Doak Campbell Stadium!

﻿ ﻿﻿ ﻿﻿ ﻿ ﻿﻿ ﻿﻿ ﻿ ﻿﻿ ﻿
And on the workout front for me, mainly I'm running with about one swim a week. Enough for it to never feel very good ;) Running has been going well - I had a great long run the other week and some solid workouts, but this past weekend was kind of a bust. I'm hoping to get back on track. I'm doing a cross country 5K this weekend, a 10K in a couple of weeks, another 5K on Thanksgiving and then the half marathon in Kiawah, SC in early December.
Posted by BriGaal at 11:47 AM