So. This went slightly better then last year, but we continue to have rotten luck at this crazy race. While sitting in a circle post race with my teammates, a Memorial Day beach weekend was brought up for 2013 as opposed to trying our luck at Doughman 2013.  I think we all have a little bit of Doughman burn-out at this point.

The day started early. This was a bit different then your typical race because I have never had to factor in 'make-up time.' In keeping with our goth theme, we were all going to put on crazy dark eye shadow and eyeliner. Then we were going to meet to spray some pink into our dyed black hair.  We were going for angry and scary but we were probably more crazy and laughable.

Just like last year, our amazing family and friends got us to the top fundraising level and we were set with our 5min head start. Thank you thank you thank you!!! There were a total of 6 teams that met this goal, and another 18 teams that raised enough for the 2min head start. All in all, a lot of money was raised for SEEDS, the local charity that helps under privileged kids in Durham.


We took a ton of pictures beforehand knowing that the morning was going to heat up and our makeup would probably be running down our faces and we would quite literally be hot messes.  We had a lot of fun prerace essentially being silly. Unfortunately, our teammate Brooke from the past 2 years couldn't make it as her and her husband were going to be in Denmark. We got Erin, another fast friend to take her place and do the bike portion which was the first leg this year.

The time flew and before we knew it Erin was at the table ready to eat her peanut butter and fluffer nutter sandwich.  There were two huge dudes right near her but that didn't matter - because she freaking ate that sandwich faster than anyone!!  She even surprised herself and looked back at the crowd with a huge smile on her face as she ran to her bike.  Erin is such a stud, not only is she a former swimmer at UNC, an amazing triathlete, but she's also a Type-1 diabetic. She is able to control her insulin with shots and has not let it stop her for one second. Prerace she spoke to Dain who is a sponsor and who's restaurant supplied the sandwiches so she could get a better idea of how much insulin to give herself.

She's made it to the bike course in first place with 2-3 guys hot on her tail. Through the first half of the ride which was very urban with lots of stops, they were all together.  But when they got onto the 2nd half with the longer stretches she took off. She totally dropped the guys and had a police escort stopping traffic for her along the way.  One of the guys she dropped couldn't believe it saying, "Your girl was hammering! She dropped us all!"  At one point, Erin said she felt like she was off course, but quickly shook it off since the police officer was continuing to stop traffic for her....until he turned around confirmed they had gone the wrong way.

Back at transition, we all knew something was wrong quickly.  Two cyclists came back, but we all thought that was fine because some of the teams had literally recruited some great cyclists for their teams. But we also figured that Erin would be very close to them. So as more and more cyclists came in we all thought it had happened again.  One of the cyclists that had been with her confirmed that she had missed a turn and although he tried to yell at her, she didn't hear and kept going.  She thinks she probably went an extra 3 miles. This bike is only 8.5 miles so that's a lot of extra time.

She finally came back and the rest of us still tried to put down our best effort.  Alysia was up next and ate some disgusting vegan taco and then ran 1.8 miles and did the short pool event. She thought she caught 4 people. Kari was our 3rd leg and she ate a fried green tomato sandwich with a big buttery bun and ran 2 miles, passing 2 people. I was the anchor but at this point the teams were so spread out that I didn't see anyone on the course. I ate some sort of Cuban pulled pork sandwich and a fried plantain and then ran 2.3 miles. I tried to push but don't think I ended up running that fast overall.  Alysia and I are definitely not in our best shape right now which does make another year seem enticing...


Anyways, we finished 6th overall. We really feel like we would've been a solid 3rd place if Erin hadn't been led off course. It was still a lot of fun, and Erin made the paper - front page of the local section. 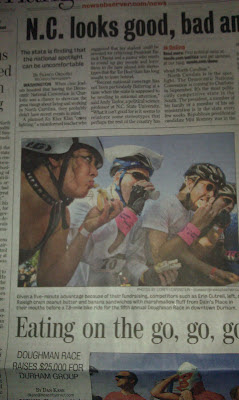 One thing that is interesting about this race - it has gotten way more competitive.  The top two teams (all guys) are super fast. And overall the teams are faster.  There weren't as many costumes as in years past - more like props instead.  And the food has definitely gotten a lot easier.  The first year Alysia did it, she had to eat a burger with bacon, sweet chili, cheddar, coleslaw and a hot dog on top! That same restaurant this year was Erin's leg - the half pb and marshmallow.  Even 3 years ago Alysia had to eat a sausage hoagie that was really big, but the portions have gotten a lot smaller. I imagine it has to be the cost it takes to make those big meals and then having them ready at transition. The race used to go to the restaurants and now it's at a central location.  We were all discussing all this at our party that night, about how the food used to be an equalizer and a big dude might be able to eat that giant burger faster and handle it better than a skinny runner guy. Now the food is super quick and not much of an issue.  It still took me a couple of minutes to get my food down and the guy who was right ahead of me literally ate it in 20 seconds, so there is that. Anyways, get a few beers in people on a back deck and you can analyze and theorize about anything.

6th place out of 81 teams is not bad. Not what we hoped for, but still a good showing. And we had a ton of fun as usual.

HOW fun! Always fun to read the updates and donate to a great cause! I hate when all the races start getting more competitive. LOL...always happens to the good ones. :) Anyway, glad you girls had a good time.

Awesome! That fried green tomato sandwich looks delicious, as does the dessert leg.

Peanut butter fluffer should have been yours...of course the crusts would have had to been cut off :)

Amazing ! And yes I thought things looked smaller and doable having seen what you ate the last two years, not that i could do it! I am waiting for Kari to blog, suppose she is still analyzing the race. ( kidding)