White Lake is a popular triathlon weekend in NC so there were lots of pictures floating around taken by friends. Here are a few more: 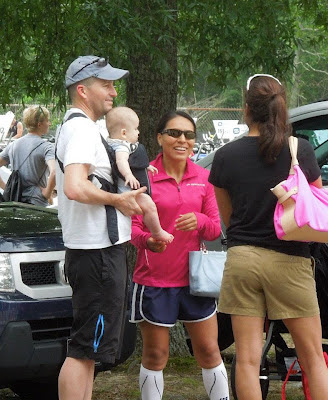 If you have any friends on facebook from NC you probably saw a lot of posts about the recent Amendment that was put to vote on Tuesday. The constitution in our state already bans same sex marriage and this amendment would take it a step further and ban civil unions and domestic partnerships. I find it very embarrassing that it passed. A common 'comic' that was posted from someecards read: "North Carolina: where you can marry your cousin, just not your gay cousin"  Technically, you can marry your 2nd cousin, but whatever. We're not all so backwoods and ignorant in this state, I promise.

And for the family, Logan has a lot of fun in his exersaucer (or as Marty likes to call it, Mission Control) so here's a  short video.

Happy Anniversary btw. Hope you guys have a good vaca. :)