Earthquakes, Hurricanes and The Nuclear Swim

Yup, I felt the earthquake last Tuesday. I didn't realize what it was because right above my office they've been doing construction on a lab for the past 3 months. Then when I found out it was an earthquake I wanted a re-do! Really, it just felt like some slight vibrations. Marty felt it - he was just lying down for a quick nap and thought that Tassie and her friend Mocha were going crazy downstairs.

We got a lot of rain from the hurricane and it was a bit gusty throughout most of the day, but overall it was just sort of a really crappy day out. I got lots done around the house - reorganized the kitchen, folded 3 loads of laundry, took apart the guest room bed and put together the crib. The baby's room is...I wouldn't totally say coming along since it's full of bags and random crap. But the crib definitely helps when describing it as a baby room.

Marty is also dealing with a bit of this: 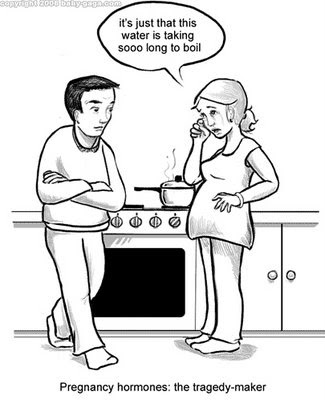 But he is putting up with me like a champ.

And finally, we had our last open water swim on Sunday. Because of the massive amount of rain we got on Saturday the water temperature dipped down to 77 degrees! This race is notoriously hot but we got lucky this year (Thanks, Irene?). There were a few Miss Cleo's out there who actually brought their wetsuits, but the rest of us enjoyed the great water temperature. My age group ended up being the most competitive of the day and I didn't get an award...but the perks of being married to the race director is I got one of the leftovers :)

I didn't swim horrible, looking at the results I was probably 2min slower then where I would be normally, but I still came out with a respectable finish and even sprinted the last 100 yards since 2 girls were right with me. Bet they didn't realize preggo was giving them the smackdown! That sprint hurt since I'm barely swimming twice a week and doing nothing hard at all.

But it's nice to be able to still 'race.' I think it helps a bit with my inherent competitiveness (is that a word?). I've said before I really haven't missed racing this year, and I still don't, but being able to get out there with others and do events like this obviously helps and maybe I wouldn't be saying I didn't miss it if these weren't here. I think in the long run it's probably going to be a good thing for my body to have this extended downtime. I have no idea if I'll ever come back to where I was but it's cool. I'm looking forward to this new phase of our life - it will be challenging and hard and rewarding...huh, kind of like racing :)

Your handy person wasn't there to help :)

I wish I would have kept some of the boy's stuff, but I dumped it all off at Goodwill the day I got home from the hospital with Gabby.

Love that little picture! I'm like that around - oh- the 27th of each month.. TMI, maybe, but I don't care! I almost cried this morning because someone donated to Ballou Skies! really! THat was all it took! Ha! Glad you got to race and I'm loving how you are handling all this.. so fun to see! Enjoy lady!

It's great that you still get to race.

Glad you guys stayed safe in the earthquake and hurricane--I'm sure Tassie loved it all.