Last year was the inaugural SwimRun North Carolina at beautiful Hanging Rock State Park. We had two friends participating so Marty decided to head over with them and volunteer at the event. When he arrived home he declared: We are doing this next year, Bri! 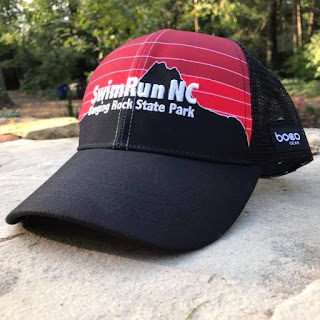 So what is a SwimRun race? From the website:

SwimRun races are team events with 2 athletes per starting team, and these teams can be either all male, all female or gender mixed. Athletes on the same team have to be within 10 meters of each other at all times, and they are allowed and encouraged to help each other.

Typically teams swim with the running shoes on their feet, and run while still wearing the wetsuits. With so many transitions in SwimRun events, it makes no sense to get undressed and dressed over and over again. Pull buoys, tethers and paddles are legal in these events, but when used must be carried from start to finish.

This race was 14 miles of running and 3k of swimming broken up into 11 runs and 9 swims, plus a lot of elevation gain for some added fun.

Not going to lie, this was not ever something I was super excited to do. #1 and this is a big #1 - I hate cold water. And the water was no doubt going to be cold (it was under 60 at the main lake we swam in and probably mid 50s in the river we finished in). I also kind of suck at fast trail running. Going up is no problem but I'm a Wuss coming down (yeah, I capitalized that).  And the whole thing seemed a bit ridiculous with the whole swimming in shoes and running in a wetsuit....but I also knew doing it with Marty would be fun. He is the best training/racing partner; he won't get angry, he doesn't care about place and besides the race, we would be able to have some 'dates' while training for it (Never mind we spent a small fortune on babysitters preparing. Some people do dinner and movie, we SwimRun out at Jordan Lake while people hiking the trails look at us like we have 7 heads).

We made our way to Danbury, NC on Saturday with Jess who would be meeting his partner for the first time (Erik) who had raced last year. Packet Pickup is at the Green Heron Ale House and there are many tasty brews on tap.

We stayed in a cabin at Hanging Rock State Park, which is awesome because it's a short drive to the start. The closest hotels are ~40min away. The cabin was great and had everything you needed and a lot you wanted (like a TV to watch college football). Instead, we resorted to listening to the radio, doing silly card tricks, and (gasp) talking.

As a side note, it's really pretty great to do a race where there are zero expectations except to have fun. I had a great night's sleep and then we were up with the sound of rain as a front was moving through the area. The outside temperature was close to 60 early on and would continue to fall throughout the morning (ending somewhere in the mid to high 40s).


As none of us were going to warmup, we got to the race site with just enough time to get in our wetsuits and line up with the other racers. The countdown began and we were off on the first run which was 4.4 miles and mostly uphill on a single track trail. It was crowded, as expected, but we were able to move past some people who started off a little faster without any problems. Every racer we encountered was super nice and awesome.

It was on this run where you get to go under a waterfall and then climb up a bunch of boulders before returning to the trail - that was really cool.

We finally made it to the lake where we took our time getting our arm sleeves on, saying hi to our friends, hugging Logan, etc - literally teams were streaming past us. And yes, I did say hugging Logan! Our friends, the Hughston's graciously watched him (umm actually a lot of times prior to this race. Logan might think his last name is Hughston right now), AND they drove 2hrs in the morning to come cheer us all on. I can't tell you how much more fun this made the race knowing I was going to see them all, and so many times with how this course was laid out. It was so awesome to have our own cheering section. I can't thank them enough for being so incredible and getting out there to support us.

I sooooo didn't want to get into the lake!! But I did, because what else was I going to do? This leg was 500 meters to the other side of the lake, onto a short 1/4 mile trail, back into the lake to cross a 25 meter section and then back on a downhill (extremely muddy) trail that was also short which took you back to the beginning where we initially got in. We did this twice before continuing up and down Moore's Wall, and then we did that whole circuit (swim-short run-short swim-short run) twice more, before heading back down the mountain.

Climbing up Moore's Wall was beautiful! And getting to the top was awesome. I'm sure some teams ran up it but Marty and I chose to mostly walk. The 'stairs' are all big and uneven and not easily runnable. I was supah-slow coming back down. It was technical, rocky, rooty and very slick. But we both stayed upright.


Back in the lake we go for our last two rounds and then we were heading back down the trail towards the finish. Before you get to the finish, though, you get into the river for ~800 meters which takes you back to the start/finish area. This was by far my least favorite part of the race. The water was frigid and not deep at all. It was tough to swim - we tried short strokes, sculling, anything to get through the water. There was enough current and tons of rocks that getting up and walk/running was also not a good idea. Marty would yell out ahead of me, "ROCK!" and I would try and avoid it or at least try not to get smacked in the face. I did totally get stuck on a rock like a beached whale and could not get myself off of it! I finally shimmied enough to get back into the water but then my pull buoy was around my ankles and trying to get that back up (with paddles on, in this river) was no easy task. Finally, we saw the finish area. Just have to navigate more rocks before we climbed the steps up to the line. 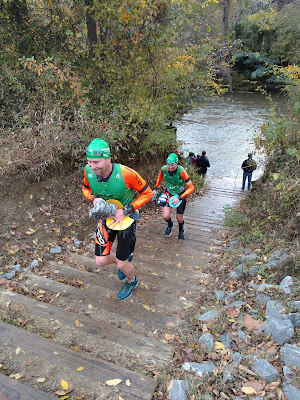 So all in all, a fantastic event. The organizers do an incredible job and I love my trucker hat and will wear it proudly. I loved doing this with Marty and I loved having friends there racing and cheering us on. I will not go so far as to say I loved the race, but definitely a top notch event and a great time.
Posted by BriGaal at 8:25 PM