The Thursday after SwimRun NC I went in to have PRK done on my eyes. Earlier in the year I had gone to get a LASIK consultation, but I wasn’t a candidate for LASIK because of the shape of my eye. In LASIK, they cut most of your cornea so they can flip it back and use the laser to correct your vision. The doctors felt that cutting that flap was too risky so they recommended the safer, older version of LASIK called PRK (it’s actually called something different, but most people know it as PRK so that’s what I’m sticking to). The main difference is instead of cutting your eye, they use a solution that dissolves the top layer of your eye, and then use the laser to correct your vision. With LASIK they flip that cornea back over and you walk out with perfect vision. With PRK, the top layer of your eye slowly grows back and you have really good vision within a week, and perfect vision within 1-3 months.

Not cutting the flap makes PRK safer, and FDA studies have also shown that long term vision is more stable than LASIK. But everyone wants instant gratification so hardly anyone opts for PRK – you get it if LASIK won’t work for you. The first few days after the procedure are not awesome, and your vision isn’t very good until around day 5-7. Which is why I decided to delay it until after the season. I was training for the Chattanooga 70.3 at the time of my initial consultation and wasn’t entirely sure how this would affect that. I figured I’d waited this long already so what was another few months.

I got the procedure done early in the afternoon on Thursday and they have you take half a Valium for relaxation and the other half when you go home so you can sleep. And boy did I sleep! We were home at 3pm and I slept until 9pm when Marty woke me up so I would eat. I had a pb&j and then went back to sleep until 7am the next morning. Friday and Saturday were not super painful, but I just literally couldn’t open my eyes for more than a second or two. It felt like my eyelids had ten pound weights on them and they were very sensitive. Mostly I laid around and listened to audio books. Shout out to Marty, husband and father extraordinaire. By Sunday I was able to open my eyes fine, but my vision was pretty awful (probably around 20-60). At my follow-up that Tuesday it was 20-40, and Thursday it was 20-30 in one eye and 20-40 in the other). My coworkers laughed at my screen resolution, but other than that everything was good. At my one month follow-up, I was 20-20 (but I did miss one letter) and they said that over the next 2 months my vision will continue to get crisper.

This all coincided with a mini break which worked out nice. I hadn’t really done much riding since early October and now I wasn’t going to be able to swim for over 2 weeks. The remaining part of November was very much do whatever you want type things as Ironman training was set to begin in December.

I ran enough to make sure I could complete a half marathon on Thanksgiving without any problem – I ran with a friend who is also doing IM Texas and we talked the whole way on a chilly morning. It was a great start to the holiday. We had our traditional friends-giving that evening and then on Friday we drove out to the mountains to spend the rest of the time with Hughston’s. We rented a small cabin, hiked the Appalachian Trail, played lots of cards and ate and drank too much. It was tons of fun.

Ironman training has officially started but all of December is going to be about consistency and trying not to miss much with the holidays. Luckily, I’m surrounded by great friends who are also training, and great husbands who are all very supportive.

And now a few pictures to commemorate Thanksgiving and the fact that Logan can now take our picture pretty good. 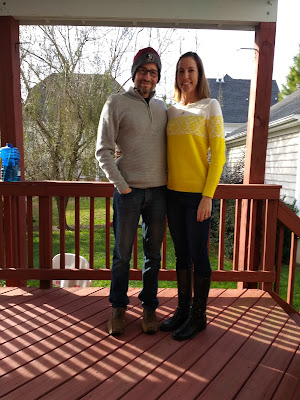 Glad you are surrounded by great husbands. I only ever heard about Marty. You should add the others to the blog once in a while. ;)

Nice blog. If you are looking for the ice melting services Richmond Then, it is the right platform to get your job done.