Marty told me he wanted me to update my blog, which I found to be a funny request since he lives with me and should know everything that's going on. But here goes.

When we last talked, we had just gotten back from the Dominican Republic.  That Sunday I did my longest run (14 miles) in preparation for the half marathon I have next weekend and it went all right.  I negative split it and although my paces were not stellar, they were not horrible. I was still thinking breaking 1:30 would be doable. Fast forward to the next day and my *hip* was really bothering me.  After some self assessment I determined that it's really my glute medius - a very common weak muscle in runners/triathletes.  I now see a pattern that when I go over 12 miles at harder paces I end up with issues. It's just not a correlation I totally realized because I hardly ever run that long.  So I've been dealing with this ever since; missing runs here and there and overall seeing my goal times disappearing and adjusting my outlook to have a fun weekend (which it will be, the posse going to the race is all fun).  My plan is to get through this as best as possible, then take a short time off from running to allow it to rest before I focus in on specific exercises to get that muscle stronger and able to endure longer distances without weakening.

Gaal, party of 3, ran in one of the local Turkey Trot's although if you search you won't find us in any of the results. Marty had originally signed up for the Skinny Turkey half marathon but after his foot injury asked to be switched to the 5K. For whatever reason, he wasn't switched and because of the timing of the two races he didn't want to cross the line since it would look like he had a super awesome half marathon time.  We got to the race with not a whole lot of time to spare and as we're in line to pick up our packets Marty asked, "You registered for this, right?"  I looked at him and gave a very eloquent, "Uhhhhhhh.....I thought you registered me?" Fail. So because my hip was being obnoxious and I didn't have a whole lot of time to get back to the car for my checkbook, I just ran with Marty and Logan, went ahead a little for some short tempo, and stopped before the finish line.


That afternoon we headed on over to our friends house for orphan Thanksgiving which has become a tradition.  Logan looooooved Thanksgiving dinner. 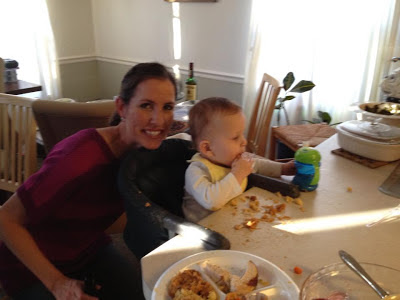 Here are some more recent pictures of the little guy in no particular order. He is loving Tassie now, handing her toys and trying to play ball with her (in the house, of course).