One of our very good friends from Orlando, Dan, got married last Thursday in the Dominican Republic. In a tribute to how awesome he is (and his wife), this destination wedding had 100 people at it. Grandma flew up to watch Logan for us and Marty and I flew to Punta Cana by way of Atlanta early Wednesday morning.

This was the first time Marty and I had ever stayed in an all-inclusive resort, and it did not disappoint. It didn't hurt that a bunch of our friends had flown down to eat, drink and be merry through the weekend. There was this little bothersome feeling I had deep down about the juxtaposition of being in 'paradise' in a 3rd world country developing country (apparently 3rd world is not a word that is used anymore. who knew.) And then to also know that Haiti, one of the poorest countries in the entire world was right next door. I tried not to let this bother me too much as I got my pina colada's at the swim up bar.

It was seriously a good time. I did very little running/working out. We did do 20min of water aerobics one day which was led by a pretty ripped Dominican named James Bond. Marty also won a swimming contest where he traveled across the pool the furthest distance underwater before coming up for air. This earned him the nickname of "Greg Louganis" from one confused vacationer, while another person tried to decide if he was even going to try since the "Merman" already won. 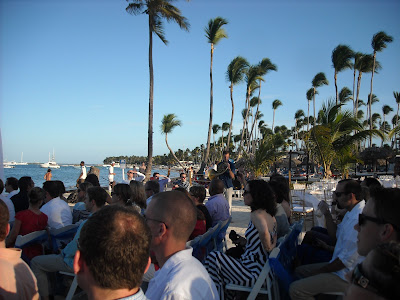 We had a great time down there and it was nice to have a mini vacation away - although we really did miss Logan a whole lot. No more traveling for us until St. Pete tri camp at the end of February.

We got home really late on Saturday (actually Sunday) and I was the last one up in the morning. Logan was at the bottom of the stairs with grandma and when I said, "Hi Logan," he whipped around and exclaimed, "Mama!!" Heart. Melt.  He had been saying those sounds recently but I really couldn't determine that they were at me - so this was the first real intentional mama I had gotten :)
Posted by BriGaal at 7:52 PM

yeah, we're supposed to say 'developed' and 'developing' - since apparently no one's undeveloped?

all-inclusive resorts are awesome. in a totally ridiculous, very specific kind of vacation way. it's a weird juxtaposition, but i don't think that makes it inherently bad. unless the resort is taking away resources that would otherwise be used by the people who live there?