Too Busy to Blog

We flew to Florida 2 weeks ago. 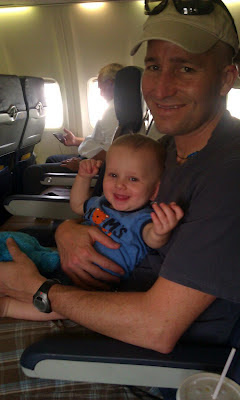 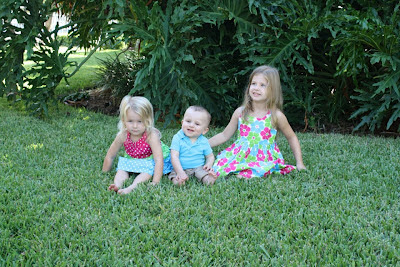 He had a cold. 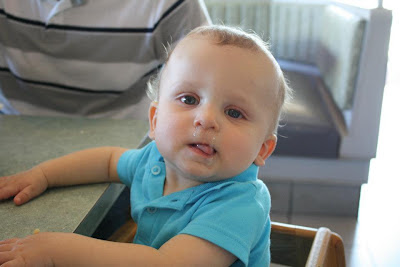 We took a family picture. 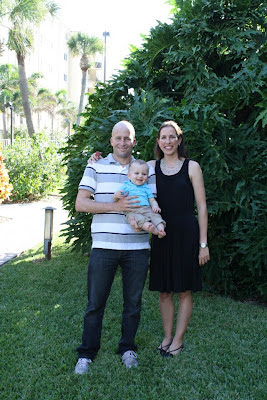 It was great seeing the Gaal side of the family. Florida is so stinking hot and humid! At first I thought the humidity was causing a bit of curl in Logan's hair, but they are still here. It's sort of funny, just a few random curls on the side of his head. 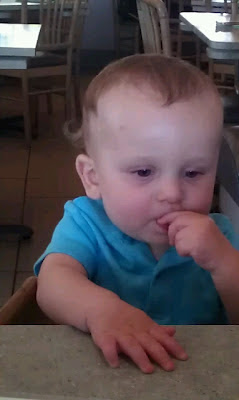 Also, rest in peace Baby Bjorn. On the full flight back from Tampa, completely frazzled with an extremely squirmy, not happy to be sitting on mom or dad's lap baby, we forgot to grab it from the overhead bin. Even though I immediately filed a lost item report, Southwest says they haven't found it. My bet is someone else found it and understood what a find it was with all the extra back support. I'm so depressed about this. 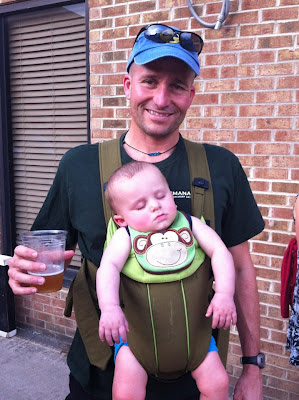 We do luckily have the basic version graciously given to us by my sister in law.

The next week at daycare, Logan got bit on the arm by some other kid who wanted a toy. We'll be working on his right hook now.

I won a 5k but the time was so horrendous I'm not even going to say it.

We went to the Triple A baseball championship held at the Durham Bulls stadium. This is what the Bull does when someone hits a homerun. There were lots of them. 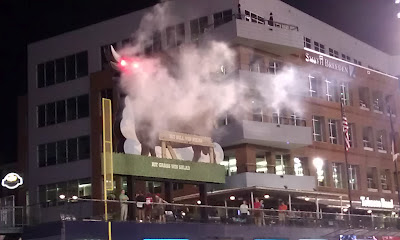 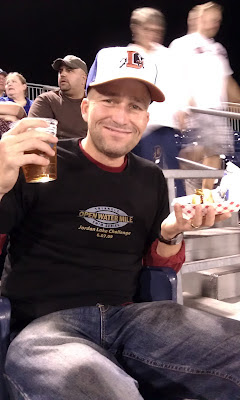 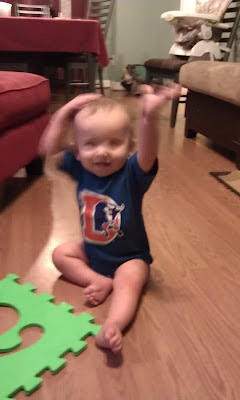 This week at daycare, he got hand, foot and mouth disease. Once his fever broke, he was acting like himself again. But before that - the poor kid. He still has some mouth sores and isn't eating as much as normal but other than that he's good. Marty and I are crossing every finger and toe in hopes that we don't get it as it's supposed to be horrendous in adults. We should know in a week or so, I suppose.  So are any of you reading this wondering why we still have him in daycare? Sometimes I do.

Besides that, he's an expert crawler and cruiser. I love this kid. 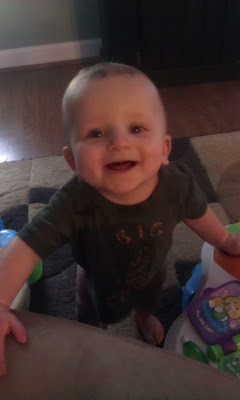 This weekend is the last triathlon of the season in Wilmington. I will be racing age group again (I raced age group earlier this year at White Lake) since the NCTS is super strict about switching categories during the year.  Which I totally don't understand since they give the series $$$ to whoever has the highest points, not just the Open racers. And it's only my 2nd race with them so I can't even qualify for series awards. Anyways, I'm off my soapbox. It probably has to do with the administrative work involved in switching people around all the time. So yeah, going to have fun regardless and not get too annoyed about the crowds on the bike, hopefully. We've rented a house on Wrightsville with a bunch of friends and will be staying until Monday morning. I can't wait; it's going to be such a fun weekend.

Mom-in-law will be watching Logan for us. She'll have Logan overload by the end of the weekend, I'm sure!

I feel you!! I flew on Southwest a couple weeks ago, just me and Charlotte (7 mo old), the flight was full, I was itching to get off after 4 hours and I left my Lululemon hoodie in the overhead! With a Luna Bar in the pocket:( I also filed a report right away but have heard nothing yet. Congrats on 5k and have fun at the beach!

It sounds like this preschool leaves something to be desired.