What better way to spend a birthday then at a Foo Fighters concert? At least, that's what I thought. I imagine if you're not a fan you might think of other things you'd rather do, but for the Gaal's this was an awesome one.

So I'm bringing it WAY back - to the very beginning of me and Marty. When I first met him he had just been to a concert in Orlando with some of his friends; Foo Fighters/Red Hot Chili Peppers (what a concert!). I was super jealous and told him I LOVED Foo. If they were ever touring close we would definitely get tickets.
And they never toured close to where we were until now. The second I heard they would be in Charlotte I knew we had to get tickets. Oh yeah, I would be 8 months pregnant - is that safe? Google and several nurse friends assured me it was no problem. And I did see other pregnant girls at the concert, too.
We had a nice dinner before the shows and made it to the venue for the 2nd opening act (Social Distortion). They played for around 45min before the Foo Fighters came on.
It. Was. Awesome.
Best concert I've ever been to. Dave Grohl is awesome and funny and runs all over the place interacting with fans. They played for almost 3 hours but it went by so quick because it was just that good.

And they ended with Everlong - the song that turned me onto the band back in the late 90's. My phone of course, would never do them justice, but here's a little snippet. 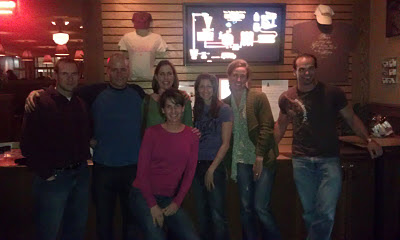 Bobby, Marty, Me, Kelly, Heather, Alex and Kari (hiding my belly on request) 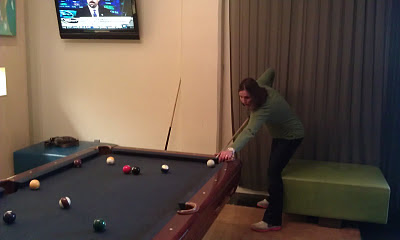 I beat Marty in pool before dinner
Posted by BriGaal at 3:05 PM

Happy 40th to hubby. Not sure if I know any songs from the "Foo" Glad a good time was had by all. :)

For you to know songs from the "Foo" must bring back memories. We all have those, and those are the best things ever IMHO.

LOL, I just thought of something. I comment on your blog, and do I even know you besides this blog?? :) LOL

Hope ya both have a good night. :)

OMG! You don't even look pregnant in this picture!