This past weekend I spectated the Beach 2 Battleship half and full iron distance races. Marty wrote a detailed race report you should check out (you don't get these very often from him). I spent most of my day running around Wrightsville and Wilmington with my good friend Alysia - it's always a good time when we're together. After Marty finished, he grumbled and stumbled around for a short time before we hopped on a boat to get back to downtown Wilmington. We quickly found a lunch spot and I have to estimate that the time from him finishing hunched over with a locked up back and to when this picture was taken couldn't have been more than hour. 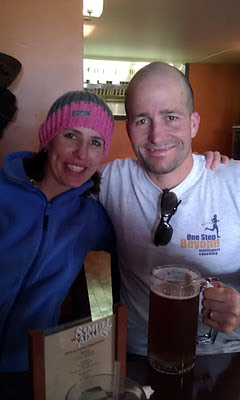 We had big plans of dressing up for Halloween and cheering on the rest of the full distance racers but situations beyond our control foiled them. First, the awards ceremony was way later than advertised and by the time we were able to get back into downtown where the car was parked was several hours behind where we thought we would be. Now we really didn't have time to drive back to Wrightsville, shower, change, and get back into downtown. Plus, we were both exhausted. And the kicker - it was FREEZING! So we dressed up last night and took some fun pictures. 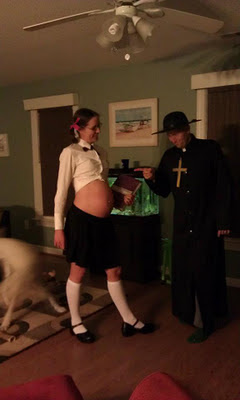 We have 22 years of Catholic school between the 2 of us, just FYI :)

Next Tuesday is Marty's 40th birthday, but this Saturday we'll be celebrating at the Flying Saucer with lots of people. Here's a picture of Marty with me and Anna (his sister) at his surprise 30th birthday. We were all babies! 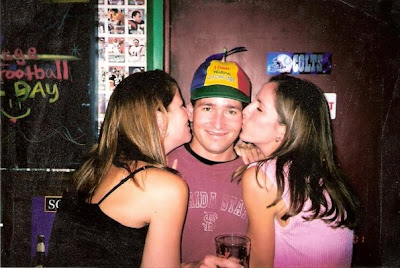 And finally, I frequent several different blogs, some of people I do actually know and have met, and others that I haven't ever met, but feel like I know. Imagine my surprise when I went to Kim Schwabenbauer's blog yesterday only to see quite possibly the most unflattering running picture of myself.

That's Kim on the left looking all relaxed and that's me on the right looking like I'm about ready to crap my pants. Please notice how much of my midriff is showing -- this was not allowed by the NCAA at the time (I have no idea if that's still a rule) but my torso is freakishly long and none of my uniforms ever came down to my bunhuggers. I would have to slouch/hunch at the starting line so the officials wouldn't notice. It's also why people tell me I look relatively small for how many weeks pregnant I am - baby's got a lot of room in there. I guarantee he won't actually be small and am fully expecting at least a 9lb-er.

But I digress - this picture was shot at the Spiked Shoe Invitational my senior year. I have vague recollections of the actual race; I didn't run great but I also didn't run horribly (sort of like my entire collegiate career). What I remember the most is that for some reason we stayed overnight after the race which was not something we typically did (the night before, yes, but we were usually on a flight back home the same day as the race). So me and my friend who was also 21 called a cab from our hotel and went to a bar that night. We ended up at the Rathskeller and had a great time. We didn't exactly sneak out since we just walked out the front door, but we certainly didn't ask anyone if we could go out. I'm sure if we had we would've been met with an emphatic 'NO' Ahhh, college :)

The most frightening thing about the above photo is that it looks like it was a poster or media guide, meaning that picture was on walls or still in storage bins...of course I'm not helping matters by posting it. I promise never to make that face (while running).

You've never had a baby yet. I have a feeling you might be making that face again. :)

Hilarious!! I'm laughing both because of the picture with Kim and the Rathskeller story. ;) If that was Kim's senior year I would have already been done. Sad we never got to race with each other (in college that is :). Oh and I love the Halloween costume too! :)

Cute Halloween costumes! And I'm glad there's a long torso explanation for why you look so tiny pregnant. I apparently do not have a long torso. And Steve's comment is kind of funny and appropriate - I'm afraid at child birth you will be making faces you never, ever though possible. But hopefully no one will be taking pictures!

That is a great photo! And so funny that you and Kim are in it together!

That pic is too funny and you do look like you are in great pain!