Race Report time! Yeah, so I'm writing a race report for a 5K. Races are few and far between for me right now (or really, nonexistent) so let me have my fun. On a related note, I'm actually not that burned up about not racing this year. Probably because I've been racing literally since I was 8 years old with only a few short breaks for some minor injuries. Right now, there are more important things going on with me and racing is not something that's near the forefront of my mind. I do still enjoy going out and cheering for everyone, and of course working out. I don't think I could never not workout.

Anyways, onto the race! Marty and I would be up in Beech Mountain for part of the 4th of July weekend visiting some family. Where is Beech Mountain? Next to Sugar Mountain. Ha, helpful, right? Sugar is near Boone so we were near Boone. But that only makes sense if you live in NC. Bottom line, we were in the mountains, and it was N-I-C-E.

My mom sent me a link to this small race and of course I knew Marty would want to do it since he loves doing races wherever we might be traveling. Since we were on a mountain, we knew it would be hilly. I've been to Beech Mountain a lot and couldn't really picture where we might run a semi-flat 5K, but whatever. I went on the website and they had some nice pictures of the race so I thought it would be all right. There was 1/4 mile that was flat and they took pictures of that 1/4 mile. 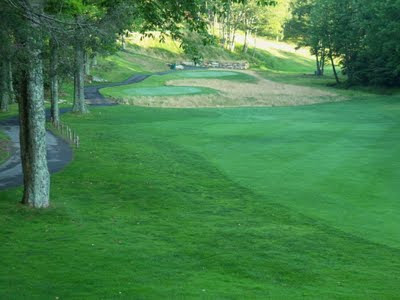 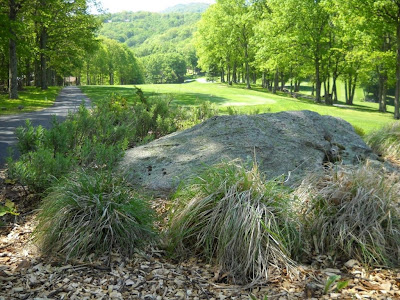 Liars
We knew the pictures were an exaggeration when we drove some of the course the night before. It was HILLY. Like crazy, wicked hilly. I've done hundreds of 5Ks (no joke) and this was by far the hardest course I've ever seen.
I was under strict instructions to keep myself under control. No problem. I have not been running very much (a 30min run is my typical jog at this point, and that's only 2, maybe 3 times a week) and absolutely no speed, unless you count the strides we do on Monday night. I promised Marty I would go easy. The hills were going to make my heartrate sky rocket and my plan was to jog up them and then fly down the downhills (most people don't know how to 'let go' on the downhill).

So that's what I did, and starting off slow worked to my advantage as almost all the girls who started off ahead of me (a lot) died a slow death and I picked them off one by one. Seriously, I was not running fast, the course just took it's toll on everyone.

There was this totally stupid steep hill on the golf course that had to be about a 20% grade. I baby stepped my way up and caught the 2nd place girl who had to stop and walk. And she was fit! I didn't actually know I was in 2nd place now and just kept it at my cruisey gear to the finish line.

Here are the results. So you see, I got 2nd place in a blazing time of 23:53. Not bad for 16 weeks pregnant! 7:41 pace in the hills and I felt fine. Not that Marty believed me since he was none too happy to see me finish that high up. I assured him over and over that I didn't push it, yes my HR was high but that was only because of the stupid hills and I wasn't overheating (the temps were very nice there). 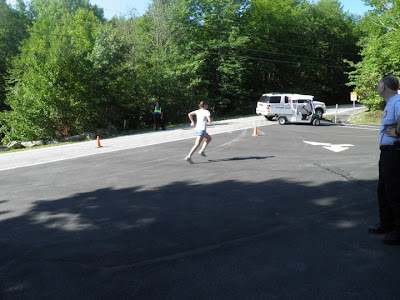 Even the finish was a slight uphill 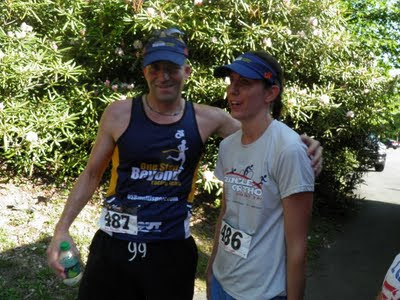 After Marty got done reprimanding me 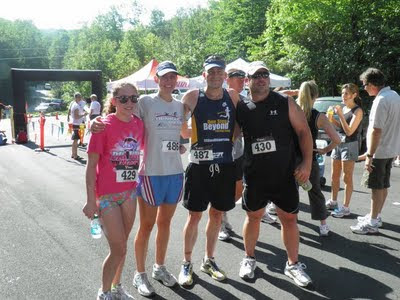 The runners (this was my 12 year old niece's first 5K! Poor thing) 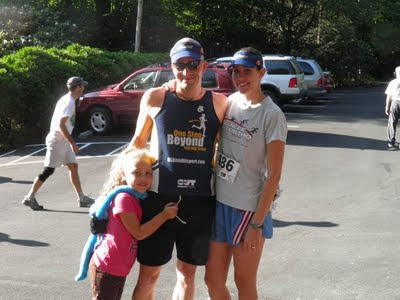 With our other niece Ashleigh, and her blue monkey 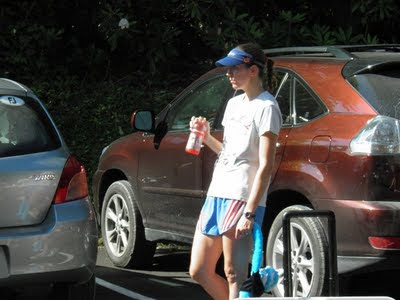 Contemplating something while holding the blue monkey 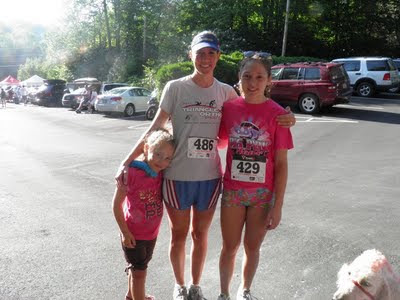 With my nieces (and Tassie in the corner)

And triathlons, take note: post-race they had pancakes (3 versions: plain, blueberry, and chocolate chip), bacon and sausage, several different fruit toppings and whipped cream, oj and coffee. That's a lot better than a bag of chips and some banana's!

It was a fun race with some great sponsors. They gave lots of goodies and the organizers did a great job for this first year event.

That night we ate barbeque and watched fireworks on the mountain with several hundred other people. It was great to sit outside for the holiday and not swelter. I was actually in jeans and a long sleeve t-shirt! The fireworks were fun but the whole time I could only think of poor Tassie and how scared she probably was. This is definitely her most hated holiday.
Posted by BriGaal at 10:45 AM

Roxy hates the 4th of July too! She was either in the tub or underneath the bed. Poor dogs!

You have got to be the most energetic and fastest pregnant chic ever! I am so impressed!

Way to get out there in conditions you are not used to... being pregnant.

You have no excuses for your speed, because you don't look pregnant... in other people's eyes. (via pictures)

Something about me?? I guess I don't race. I run.

If I lived your life I would race, and you nonchalantly gave it up for a while. :)

Frito hates the weekend of the fourth too. It seems like everyone here seems to light off their own fire works too. Ugh!

Nice job! I like the sound of various types of pancakes.