Boone Camp was slightly different for me this year as I'm not really 'training' right now. Just working out depending on how I feel, and it's amazing how much I can excuse myself when I don't have a goal in sight. Someone mentioned to me that I'm still working out way more than the average American, but it seems like nothing most times!

Anyways, we rented an even bigger house this year that had gorgeous views and allowed all 19 of us to stay together. Marty and Steffen did most of the cooking (thanks Steffen!!) Most campers got there Wednesday night and much wine and beer was consumed - a theme for the week :)

Thursday was a ride to the Viaduct - which I opted out of since I didn't think I could actually ride that far in that hilly of terrain and be even remotely close to everyone. So I did a shorter ride by myself where I proceeded to get lost and ended up using my phone GPS to get me back home. I also did much more climbing than the original route planned for. Ah well - still a beautiful ride in nice weather. 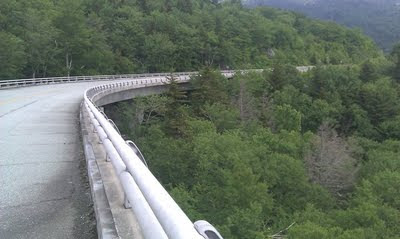 View from the Viaduct 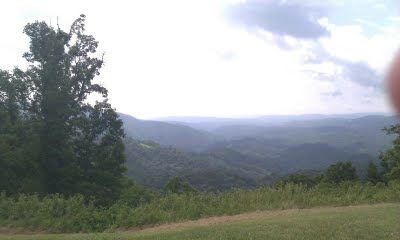 In the afternoon we went to a greenway that is the flattest place you will find in Boone. I got to catch up with Brian who ironically I hadn't seen since Florida camp even though he lives only 20min away from us! 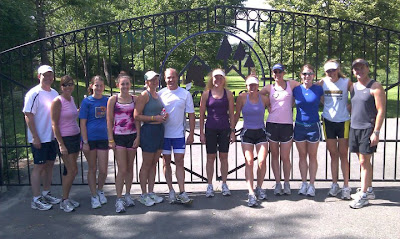 Someone's got bunny ears!
Thursday night - yummy burritos and card games. We ran through 2 big containers of ice cream, too.

Friday was a hilly ride where I sagged for the group. A few miscues where the ride leaders forgot about me (let's hit the greenway....oops, what about Bri?) and a bit of cyclocross for the camp before heading up a nice climb near Valle Crucis. I was sore and tired after sagging which got a lot comments from people making fun of me to which I replied, you go drive a car for 4 hours going 15 mph! 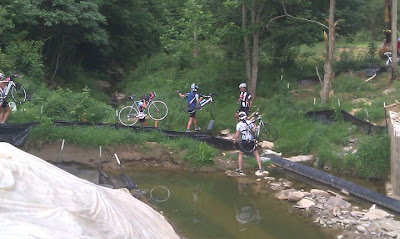 >
I swear there used to be a bridge 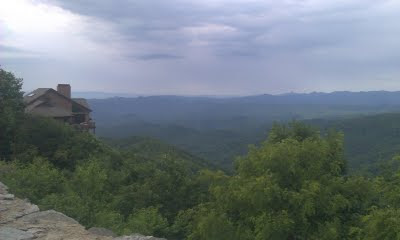 A view from the Sag Wagon

A nice swim in the afternoon and yummy chicken parm/lasagna washed down with birthday cake. Not that we needed an excuse for cake, but it was convenient that Lori's fell during camp.

Saturday we went to Moses Cone Park (awesome place to run!) and then hit Kilwin's ice cream which is now a tradition after the long run. We ate ice cream and pizza in the park right in the middle of Blowing Rock. Another gorgeous day. 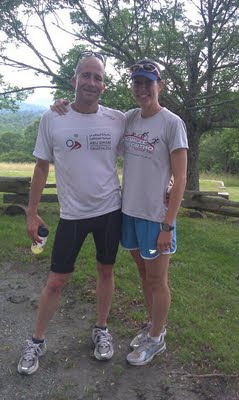 Marty and me at Moses Cone 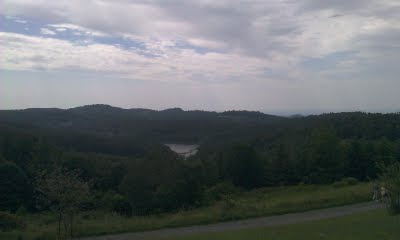 View from the Manor House at Moses Cone 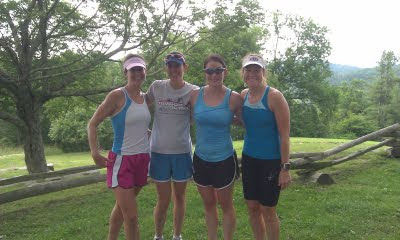 These girls are fast!

Unfortunately, a big storm blew through which kept everyone from doing another swim in the afternoon -- okay, let's be honest, I wasn't actually planning on going anyways! Dinner that night was cookout food before half of us headed to a bar in Boone. 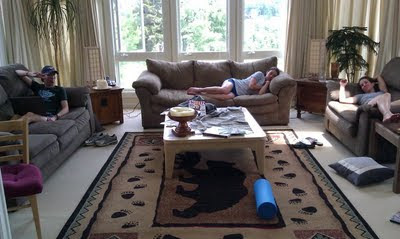 Lounging instead of swimming 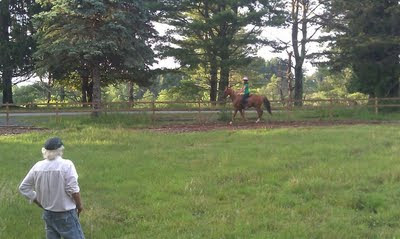 It was convenient for everyone that I'm pregnant because I have no idea how they all thought they would be getting into town - DD for 5.5 more months! Before we left we took several camp pictures, some of which are not fit for the internet to see. 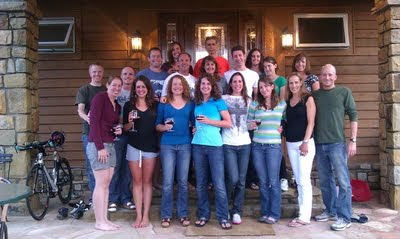 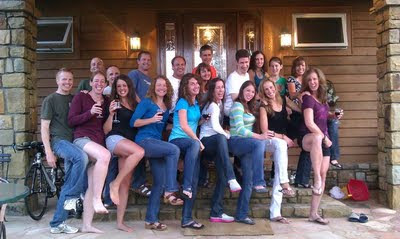 The real action took place at the bar we ended up at. While googling directions it was discovered that there was a women's roller derby competition that night and both teams would be partying afterwards at the bar! Cue raucous screams. As we were pulling into the parking lot we saw our first derby girl and lets just say the amount of screaming and laughing and pointing that went on led me to think there was no way we were walking out of this bar without at least one black eye. Marty had to calm us all down.

Pictures wouldn't do it justice, and frankly, we were all a little scared to be caught taking pictures, but let me just say this subculture of people was AWESOME!! Kari, Alysia and I also got some great ideas for our Doughman outfits next year.

There was dancing, shots, karaoke and conversations that cannot be repeated. Marty, Lori and sober pregnant girl (that would be me in case you're perplexed) all left at 11pm. The rest of the crew closed down the bar.

Yup. This ain't your run of the mill tri camp! Can't wait for next year!

I always wondered about the pregnancy thing. Me as a juvenile who never really got past the age of 18 really, wonders about those 9 mos. Someone like you it changes the lifestyle quite a bit.

Nothing really to say about it, but this post made me think of the changes, and I dunno I guess that is it. :)

Well my first question was if Tassie went, but now i need to know If Kari decided to take up Derby. I bet she would kick ass. :) looks like fun and what lovely views!