Yesterday marked our 7th anniversary. This year we decided to stay in town and just go to a really nice dinner. We played dress up and went to Sullivan's, a swanky steakhouse in Raleigh where you end up spending $100 for 2 people without batting an eye. It was delicious, though, and dessert was on them because it was our anniversary.

Here we are before we left. We just set the timer up on our camera, called Tassie over and she sat in between us. She seems to understand when we're trying to take a family picture. Smart dog. 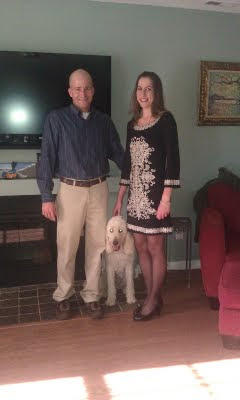 We started off the day with a beautiful bike ride. I love riding with Marty.

Saturday night was also a lot of fun as we had one of our Master's parties, which we typically have every 3 or 4 months. As we were leaving Heather's Marty commented, wow, we know some really great people. To which I replied, and it's all because of you! This group of people probably wouldn't have all gotten together had it not been for Marty starting the Master's team here in Cary and sticking with it even when we were losing money every month.

Congrats on the anniversary. Congrats on remembering. Lisa and I are so baaaad at that. :))