Race: Lake Logan International
Venue: Beautiful Canton, NC (a bit west of Asheville, a bit east of Waynesville)
Partners in Crime: Kari, Alysia, myself
Sub Partners in Crime: Marty and Tassie
Accommodations: Cabin up a steep hill – may or may not have had a squirrel living in the loft. Surrounded by 15,000 crickets.

Marty picked me up from work and we raced over to packet pickup with 10min to spare. We met up with Kari and Alysia at the cabin and got all of our race gear ready while deciding on what time to get up the next morning. Marty doesn’t like to get there too early; I am the opposite. This can cause problems, but this time around I had my girls on my side wanting to leave early. 4:15 wake up and out the door no later than 5:00 am. Mission accomplished. I kept everyone up to date on my bowel movements. They were thrilled.

Get to the race site and do the usual morning set up. Off for a short jog and when I come back this guy had his entire house spread out in front of his and my bike. 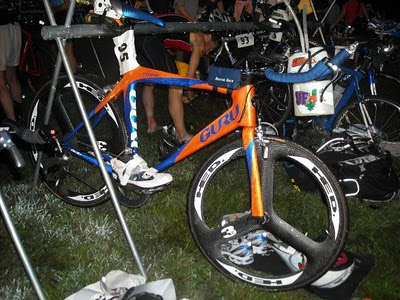 Besides all the ugliness on his bike/helmet/aero bottle, he was also wearing UF crocs. I deadpanned, “so, you a Gator fan?” His response, “yeah, kind of obnoxious isn’t it?” My reply, “yup, you guys usually are.” He then said for me not to worry, he would have all his stuff put away. Plus, his bike would be gone by the time I came into transition and I would have plenty of room. I figured he was right since he was starting 4min ahead of me…but guess who’s bike was still sitting there when I came into T1? Later Gator ;)

I warmed up in the warm but wetsuit legal mountain lake with Marty, tried to get a little conversation out of a girl (eventual winner) who looked super fast. She didn’t bite and was looking very serious. I was in the first women’s wave (wave 4, women 34 & under – the second women’s wave was 2 waves/8min later) I got Alysia over next to me at the line and told her I wanted to draft off of her feet but dangit if I cannot stick with her in the beginning! I tried but was quickly in Z5a and had to back off. I got into a good rhythm and saw a purple cap about 20 yards up and knew it was her. We stayed that distance away from each other the entire swim. I passed her running into T1 and knew there were a couple of girls who also shot off like cannons at the start so figured I was somewhere in the top 5.

Bike: This was a first, I got yelled at! Okay, so since there were 2 waves of men ahead, there were lots of guys out on the road. Not many seem to understand the concept of drafting/blocking/dropping back/staying to the right. I was going back and forth with a couple of guys for most of the ride and this one guy who was on a road bike was just blatantly sitting on everyone’s wheel. Every time someone passed him he was right on them – I assumed he was a roadie and maybe didn’t know the rules, but that’s not an excuse. I was very careful whenever this group passed me to soft pedal and drop back – even to the point of sitting up. I have had one penalty and it was for that – not getting out of the draft zone quick enough so I am very conscious of this. But after dropping back I would get aero again and slowly catch back up to them, pass them, and then they would pass me back. Rinse and repeat. So after like the 5th time I passed the group and mr. roadie got right back on my wheel, I yelled, “Dude! You can’t draft!” He yelled back, “SHUT UP!” I was shocked and responded with the eloquent, “Shut up?!?!” (you talking to me?!) He yelled back, “Yeah, shut up!!” Later on in the ride he must’ve realized he was being an asshole and started to be nicer finishing with cheering me on as I ran out of transition. Anyways, other than that, I felt really good on the bike.

Run: The temps were nice – in the 80’s which is a huge difference from the 100 degrees we’ve been training in. Plus, this run is shaded. Uphill on the way out, downhill on the way back with a shooting range right next to the road (but hidden in the trees) just to make sure you’re awake. My goal was to stay controlled going up and drop the hammer coming back. I felt good the first mile but was disappointed when I saw my split (6:55), I didn’t really factor in the hill we just ran up and assumed the reason why I was feeling good was because I was going too slow. I dropped the 2nd mile down to a 6:40 but still wasn’t that happy so picked it up some more. Luckily, my legs were responding well and I felt great! I saw the first place girl coming back down (and now knew for sure I was 2nd in my wave), yelled a ‘good job!’ but didn’t get any acknowledgement. Like I said, very serious. She was killing it and ended up 4th OVERALL – and that includes 2 guys who are pro’s! Anyways, I hit the turnaround and still felt good so really tried to run hard back down. I saw Alicia Parr and Gail Kattouf who need no introduction – they are super freaking fast (they started 8 min behind me). Also yelled to Alysia, Kari and Cari and lots of others on the road. I finished up and felt really relaxed and good all the way to the finish line. I was stoked to dip under that 40:00 mark for the 10K.

Bonehead race call: This race has a tiny bit of prize money - $100 for the overall winners, $100 for the master’s overall winners, $100 for the fastest split (swim, bike and run). I ended up 4th overall behind some serious fast ladies, and only 3 seconds behind Alicia, so really, I call it a win for me ;) They give out the top 3 overall and Alicia is called up as 3rd, which she is, but I think we assumed she would be pulled out for master’s overall (she turns 40 this year). Then we assumed that they were just going to give her both because really, she is that fast and if you’re 3rd, give her that award and the master’s award. But nope, they gave the master’s award (and the $100) to the 2nd place master’s girl who was 14 min behind Alicia! Alicia asked the RD and he said, “Nope. Third is third.” Uhhhhh, what?! So if she had gone slower (and in this instance, 3 seconds was all it took – I should’ve sprinted at the end!) she would’ve won $100! Saturday night: Our clan stayed overnight and went into Asheville for dinner and cupcakes. We did have to wait forever to get a table and shot red hot death glares at a family who would not leave but they were quickly forgotten as we tucked into our meal.

Sunday: Planned on a 2hr ‘easy spin’ but we’re in the mountains so spinning the whole time isn’t all that possible. Marty and I are familiar with Maggie Valley so we picked the least hilly route, which still had some nice climbs. At least it was pretty. Nice ride despite the hills and we stopped for lunch in Asheville on the way back home.

Future plans: staying put for the next few weekends – yeah!
Posted by BriGaal at 11:56 AM

Bri, you had a great race! Excellent the whole way around. Look out 30-somethings at Nats next month!

It would have been such fun for all the women to be in the same wave, then we could have seen how close the top 4 really were. Surely, then, you would have outsprinted me to the line. :)

I think I have 25,000 crickets! You didn't see the gator guy later to ask him why his bike was still in transition :) Mom

Congrats on the great race! Glad you put that gator in his place, too.

Yes I agree with mom in law, I would of had to go to gator guy post race and asked why his bike was still there and then said was that obnoxious of me, YEP!