Marty, Tassie and I drove up to Virginia on Saturday afternoon. It was HOT. We made it to my sister's house and Tassie reunited with Jessie the Great Dane. Jackson is the newest addition (another Great Dane) and he is one big, dumb, happy dog. Those are the best :) 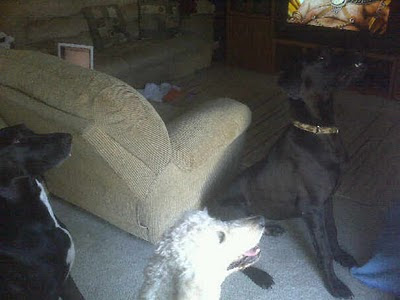 What the heck were we watching?!

I checked out the entry list and saw some familiar names from racing up in this neck of the woods a few times now. And another name that looked slightly familiar. So I did what any triathlete does (you know you all do) and googled her -- oh, she is very fast. Way faster than me right now (I'm a realist). Goal is now to finish 2nd.

I had fun hanging out with sister, niece, and bro-in-law (who was also racing the next day) on Saturday night. We ate pizza and made homemade cookies. Did I mention that I'm not very serious right now? More on that later.

Sister and niece braved the hot temperatures and searing sun to cheer us on the next morning. THANK YOU, HEATHER!!! It's so nice to have someone out there letting you know where your competition is and giving words of encouragement (and taking pictures, even if she takes a lot of butt shots).

We got to the race site with enough time to take care of all matters of business and found out that for the first time in 19 years, no wetsuits would be allowed. Did I mention it was hot? And windy (it's not called Breezy Point for nothing!) I got in the water for a warmup swim and swam right into a jelly fish. Then my arm started burning. I got out the water and decided I didn't really need to warmup today.

The swim was good - I drafted off of one guy for most of the race and hoped he was siting well because I wasn't doing much of that. I was pleasantly surprised to be not too far behind fast girl. I know I shouldn't always feel like this, but I will probably never come to terms with the fact that I'm actually a pretty good swimmer. When you don't have that background and have come out of races last in your wave, it's hard to let that stuff go. I was the 3rd girl out of the water (1st was a really fast swimmer).

Oh yeah, did I also mention that this is only my SECOND triathlon of the year?! Usually by this time I've done a good handful but with the stupid foot injury I missed a couple I would've done. I felt this in transition as I was fumbling around more than normal. Not sure if I'll be racing this bike again - we're going with the Cervelo! 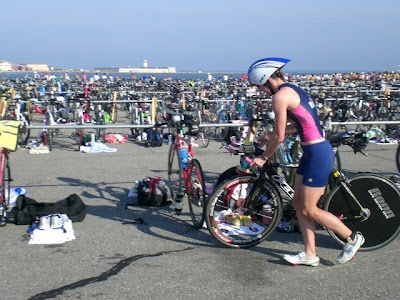 I don't like the first half of this bike. It's so chopped up and bumpy and I just felt like I couldn't get going. The second half was much better and I caught the first girl out of the water, now moving into 2nd place (she was very nice, I chatted with her before the start - I think she maybe swam at Purdue?). It was windy out there, I think windier than last year, but my bike was pretty poor, regardless.

Marty heading out of T2. 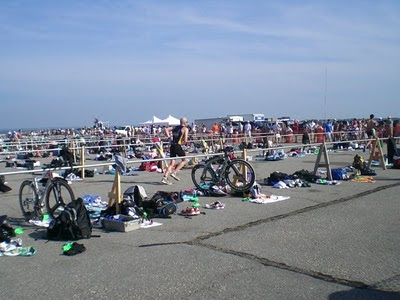 Back off the bike and my sister yells that I'm 2:30 down on first (no surprise). I was also a couple of minutes up on 3rd place so just put it in cruise control and didn't run super hard. Don't get me wrong, I did run hard, but not past that comfortable fast pace. My run IS starting to come around but sometimes I don't feel the need to kill myself when it's not going to make a difference, especially in a low priority race.

Seriously, could you imagine a more desolate finish? It's also a nice strong headwind in addition to being completely devoid of shade and very hot. 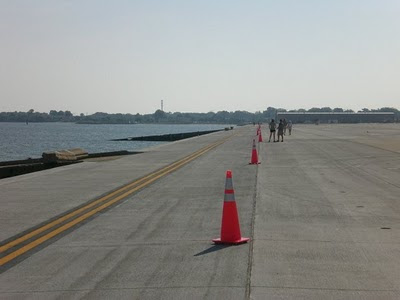 Smiling for the camera as I finish up. 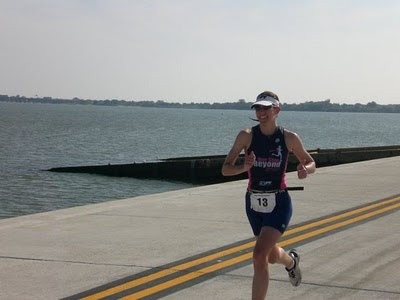 Alicia Parr wrote a great blog the other day about the 'Importance of Hunger' and I couldn't have written it better myself. Mostly because I'm not as good of a writer as she is :) I'm hoping to put forth a good showing at Nationals in September, and there is no way I can be very disciplined right now. Disciplined meaning not missing workouts here and there, and really focusing and performing each one to a high ability. I like to have balance and I know I wouldn't make it to September if I were to be so serious right now (and I know some of you CAN do this - but you have to know what works for you). But very soon I will be more serious, and hopefully come September I'll be in great shape for myself.
Things that will be changing:

I know this is ridiculously low training, and I can be semi-competitive in a sprint off of this, but there's no way I would expect to do this and be competitive in an Olympic distance. I also really need to stay injury free on the run, something that hasn't happened since the Disney half marathon in January.

Okay, blah, enough of that, here are more pictures :)

Despite what this photo may indicate, I'm really not a giant. 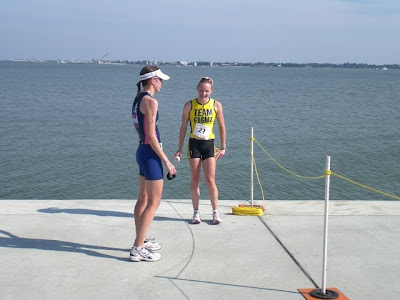 Ashleigh and I did this pose last year: 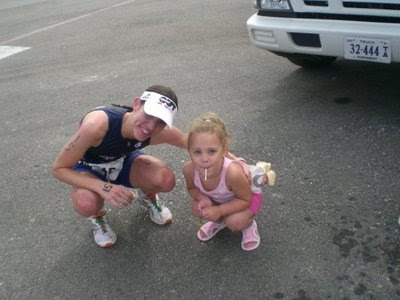 So we tried to recreate it this year. 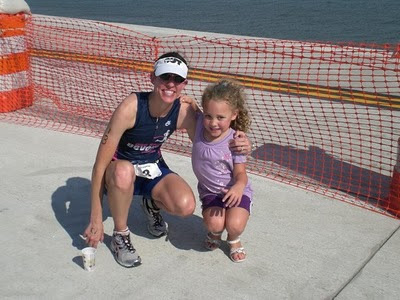 The Godfather imparting words of wisdom. 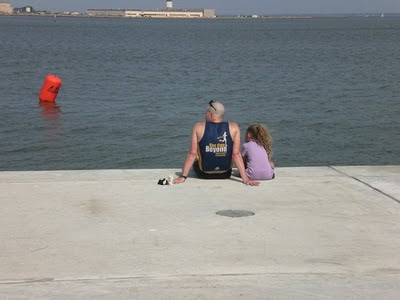 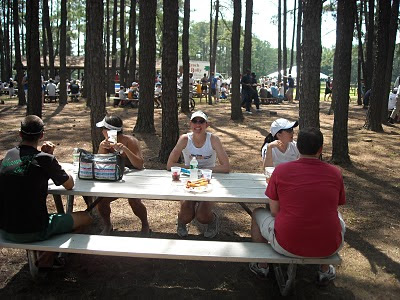 HAHAHA IT'S SO HOT MY SKIN IS BURNING OFF HAHAHAHA!
Seriously, good luck to Crystal and Janet who are both racing Eagleman this weekend. 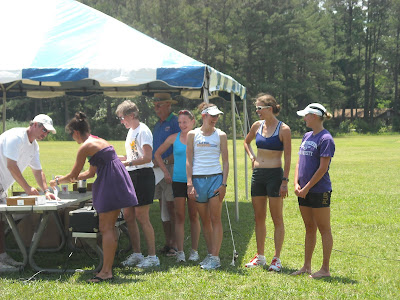 duh bri- the reason for the butt shots is you blow by the shutter speed of the camera. simple. wonder if marty was talking about nuclear physics or puppies with your neice... hmmm :)

Great race Bri! I have no doubt when you are ready to bear down for Nationals in Sept you will be a force to be reckoned with! (not that you aren't already!). You are right though - have you to find what works for you and keeps you healthiest, both mentally and physically!! Congrats!

That is awesome!! Loved the pictures and the post! Wow.. you ARE a good swimmer. If I came out with even the lead people in SIGHT I would be sooo happy! Great job, good goals and come Sept. You'll be ready for SURE! Nationals right??