Racing Weekend for All the Gaal's

Two years ago Marty and Tassie did the Umstead Coalition run. It's one of the few runs that allows dogs and she won for doggies. We couldn't do it last year because it was the same day as the 5280 open water swim, but this year they were on separate weekends. Since Marty was doing the Triangle Orthopedic Sprint triathlon on Sunday, it was me and Tassie for the run.

We got her shaved and mohawked-up and then dyed it pink for the run. 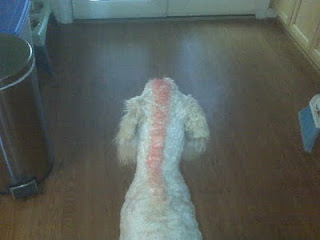 The run didn't start until 9:45 and I was a little worried because it was starting to get pretty warm. And Tassie was SUPER excited just being at the venue with all the other dogs and people. She didn't heed my advice of being a zen-doggie pre-race.

The start was a little dicey because there were a lot more people than two years ago, and you have to make a sharp right turn after 30 yards. Tassie was all over the place not exactly understanding what was going on. It took us awhile to get into a groove, and then we saw Marty which activates her ADD as evidenced by this video. This is what I imagine is going through her head: Run Happy! Happy Run! Love Running! Oh HI DADDY!


(I apologize for the poor quality of the video and pictures, they are off the blackberry as we seem to have misplaced our real camera once again)

We came through the 1 mile in 7:09 (it was a slight downhill). The 2nd mile had a big uphill and a dog passed us! I was all ready to pick it up but held back upon realizing that maybe Tassie was a bit tired and hot. See what a good mom I am? I can totally have kids. Anyways, we hit the 2 mile turn around and I missed our split because I was trying to get her to drink some water (they had dog bowls out) but she didn't want to waste anytime on that so we took off and she cruised on back down the hill and we put a bunch of distance on the other dog. He had obviously started off a little too quick ;)

We hit the 3 mile mark in 21:47 and then Tassie was on a mission to pick off as many people as possible. We passed so many people in the last mile (now with a slight uphill) and she totally gave these two guys we passed the "Lance Armstrong Look." 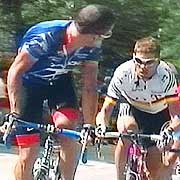 I am SO not joking about that! She seriously got some sort of second wind and was mowing everyone down. Marty was trying to run ahead of us here to get a good shot but Tassie wouldn't let him so that's why this is from behind. 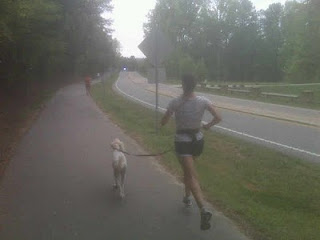 So yes, she is doggie champion once again. And she got lots and lots of attention from everyone because she is so nice and had the punk rock mohawk.

Then this morning she got even MORE attention out at the triathlon. She's a regular celebrity in these parts.
Posted by BriGaal at 5:38 PM

Yeah for Tassie (and Bri)!! I would say Roxy could give her a run for her money but Roxy is much more likely to be like the dog that went out too fast and got passed mid-race. :) Sounds like a great weekend!

Yeah for Tassie (and Bri)!! I would say Roxy could give her a run for her money but Roxy is much more likely to be like the dog that went out too fast and got passed mid-race. :) Sounds like a great weekend!

Great Job Brianne! I am sure that was a sight and all. I think Carter has some good top end speed but not stamina unless maybe I could come up with a way to constantly throw a tennis ball in front of him. He can do that for hours but then falls asleep around 8pm b/c he wears himself out.