After St. Anthony's I didn't have any races on the schedule and just figured I'd jump into a few local sprints throughout the summer. A hard interval run on a June morning was immediately followed by all day training/testing as we implemented a new financial system at work. When I got up at the end of the day, my right hip was super tight. I figured I needed to stretch and roll and it would be fine. It wasn't. It gradually got worse every week until I had to shut down running for most of July. I was very cautious coming back and did a lot of walk/jogging (and dry needling/stretching/yoga/standing more at work).

Marty and I decided to do a few late season races after it hopefully cooled down a bit and I could get my hip better. First up was the Outer Banks Triathlon which we had never done. Actually, all of the races we signed up for we had never done. Outer Banks was also an excuse for us to do a mini vacay at the beach since we could both race on separate days. No babysitter needed for Junior Awesome.

Outer Banks Sprint Triathlon
We had some friends also join us for this and stay at the beach house we rented in Nags Head. It was a fun and relaxing weekend. Unfortunately, all swims were cancelled for the races because of high bacteria in the water leftover from the hurricane that came through the week before. This was a bummer but I was honestly glad they were able to pull off any race that weekend. They started us in 4 different 'waves' where we self seeded in the wave and ran into transition to our bikes. Old ladies last, of course :/ They started with two waves of men, then two waves of women. I ended up 3rd in line for my wave but was first out of transition. The bike was crowded with cars, something I hope the organizers can work on for next year. It was down right dangerous leaving the first transition area since they allowed spectators to leave before everyone was out on the bike (there were two transitions). I went super hard on the bike since I knew the run was going to be hard for me either way - I just wasn't in good run shape yet. I was able to catch everyone in the wave ahead of me except for my friend Sarah. It was a very hot and humid day so the run felt pretty brutal. I knew it was going to be a tough one when after 5min into the run I thought I wasn't going to be able to finish :) I was definitely on the struggle bus out there - running is so freaking hard when you're not in shape! I did manage to win overall for females with Sarah not too far behind me.
Results 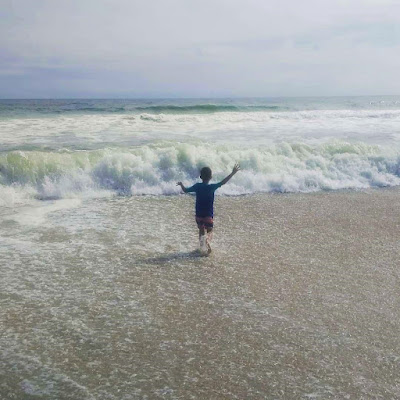 Sandling Beach Formula 1 Sprint
This race was a crazy format and just down the road from us. It was also 3 weeks after the Outer Banks and I was starting to feel a bit more fit. Bike-Run-Swim-Bike-Run-Swim-Bike-Run
All the bikes were 5miles and the runs were 2K. The two swims were 500 yards.The format made this very fun with zero pressure as it's so different than most other races you'll ever do. The competition was great, but it was very disappointing how low the overall turnout was. The course itself - really challenging! The bikes were two loops with lots of turns and one moderate hill. I never felt like I could really get going on the bike. The run was out and back (uphill/downhill and then reverse it). The swim was calm and a perfect temperature. When I first signed up for this race my biggest concern was the water being cold (since I'm a total cold water wuss) but it felt great. I knew from doing the Old School Aquathons years ago that swimming after running is super hard, so concentrated on long, relaxed strokes. I ended up finishing second to a young super stud and had a really fun day.
Results

The Dam Triathlon
6 days later was our last triathlon for the year: The Dam Triathlon in Lexington, SC, part of the South Carolina Triathlon Series. My sister moved to Columbia a few years ago and then bought a house a year after moving there. I discovered that their house was only 10min from the transition area of this race and it was a fun distance (they called it a 'sprinternational' since it is in between a sprint and international distance: 1000 meter swim, 21 mile bike, 4 mile run). Last year we couldn't make it because Marty had signed up for the NC 70.3 on the same day (which ended up getting cancelled) but we penciled the race in for this year.

I had taken a peek at the participant list and saw there looked to be a good number of open/masters open competitors which I was very pumped about. I didn't know any of them (except for Katie Malone) but was glad to see a healthy amount that would definitely mean good competition. Justin had also told me the prior week that the points were real tight for the series so it was going to be a good one. I mistakenly signed up for Masters Open instead of the Open division - I had remembered that back in the day for the North Carolina Triathlon Series that once you were 40 you were in Masters Open, no exceptions. But this was not the case down here - anyone could be in the Open division, and this is where all the fast girls were categorized. Luckily we all went in the same wave so it ended up not being a big deal.

The swim was barely wetsuit legal (yay!) and had some chop since it was a bit windy out. I seem to do better in these type of conditions and ended up coming out with the first girl (although I didn't know it at the time). We got on the bike at the same time but I was able to ride away pretty quick. The bike course was open to traffic but luckily I only had one close call (a car pulling out of a gas station right after I had a made a left turn onto the road). I was almost completely by myself on the bike except for a few slower male swimmers who passed me. The second lap had a few more people since I was now overlapping the later waves but overall it was very spread out. I thought I was in first but really wasn't sure until I got on the run where a spectator finally said something.

On the run I put it in a comfortable hard pace - I'm finally feeling better fitness-wise but didn't have the confidence that I could run all that fast for 4 miles. I knew I had a few more gears in me and was feeling good but wanted to see how far the other girls were at the turn around before deciding if I needed to drop the pace. I could see Marty not too far ahead but it seemed like I wasn't gaining much ground on him at all. After the turn, it looked like I had a pretty solid lead so no need to go to the well. Almost to the finish line and Marty was just a handful of seconds in front of me - he took a quick look back and because he's a nice hubby he slowed a bit so we could cross together, which I don't think we have ever done before! Jeremy, the race director (who we knew from the NCTS) said some real nice things about us when we crossed. First overall female with a course record to boot! Super fun.
Results 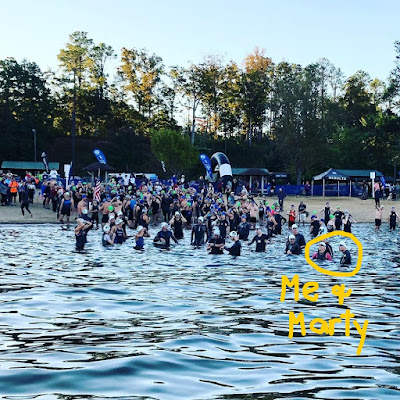 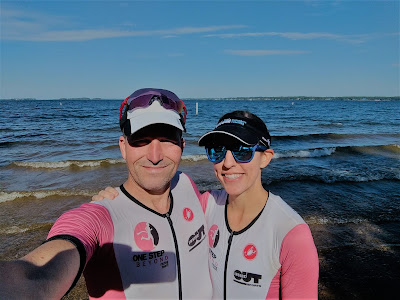