A race report? Why not. Maybe I’ll do just one a year from now on 😉

St. Anthony’s Triathlon is an iconic Olympic distance that was celebrating it’s 36th year in 2019. I had done the youth triathlon 5 or 6 times when I was young, and then the Olympic distance a handful of times post college. We hadn’t been back down there for this race for quite some time – maybe 2010? I could look it up but I’m feeling lazy.

My training was pretty good this winter in prep for this race. It was nothing crazy, and nothing terribly hard. It was training for fitness and to continue my cake/ice cream habit.
*REAL TIME CHECKING MY TRAINING HOURS*  Uhhhhh, so I actually thought I trained more than I did. Since my watch automatically uploads everything into training peaks, I can check this stuff (easier than old race results, apparently). My swim/bike/run average hours for the last 90 days was a whopping 6hrs 40min a week. This was typically 2 swims a week, 3 runs and 2 bikes (1 mountain bike on the bridle trails for ~1hr and one outside weekend ride for ~1.5 – 2hrs). That’s a far cry from the training hours this time last year when I was gearing up for IM Texas, but this was what I wanted to do this year. And I loved it. There wasn’t any pressure, it was just getting out when I could and enjoying it.

Let’s get on with this race report already. I decided to race age group (I had raced open several times in the past at this race) but was not feeling particularly speedy and frankly didn’t want to be racing 25 year old’s. The bad thing about racing age group is that my wave was one of the last to go. The pro’s went off at 6:50 and my wave went at 8:08 (two waves were behind me, women 35-39, so hey, I was 5 min ahead of my real age, and then novice). Going late sucks for many reasons: you sit around for a long time so have to make sure you are eating and drinking enough, there are lots of bodies to swim through, and it doesn’t get any cooler.

I made my way out into the water with my age group where we started in chest deep water (Sadness. We used to run in from the beach which adds a whole different element to the start of the race, and I was looking forward to it since that’s not a start you see much of anymore). It seemed like not many were interested in lining up front and center so don’t mind if I do. The cannon sounded and I went pretty hard for the first 50 yards with one another girl and we separated from the rest of the group quickly. The first part of the swim was fairly uneventful, except for the jet ski that went right in front of me to get to a distressed swimmer. That made it quite bumpy for half a minute or so. I started catching the wave ahead of me but was able to navigate pretty good through them until we made the left turn out to sea, into the sun. This is also where the waves got much bigger, which, not gonna lie, I was super pumped about.  It certainly slows me down but I’m also very comfortable in it so it doesn’t bother me as much as it seems to bother others. Plus, coming from our normal calm lake swims in NC, I was happy to have an honest swim. My time was right around 25min which is, I think, my slowest ever 1500 meter swims, but was 2nd in my age group. It was a slow day across the board (not just in the swim).

The bike had some wind, and the course has a lot of turns, but it’s totally flat. Starting so late meant that all I did was pass people. Literally, no one passed me the entire bike. I was that person yelling ‘on your left’ maybe like a jerk sometimes, but people, come on, stay to the right out there. I don’t actually have anything else to say about the bike. It was fine. My 5 mile splits were: 13:38, 13:22, 13:26, 13:30 so yay for riding even (12:30ish for the last bit which is less than 5). 1st off the bike for my age group.

The run, ugh it was hot. I started off comfy and felt fine and it was literally just a slow burn. I slowed down each mile and started walking through the aid stations after half way (yeah, I walked, whatevs). I even walked at mile 5 where there wasn’t an aid station but I really felt like there should’ve been! I didn’t walk for long and somehow still managed to have the fastest run split in my age group, which is a testament to how hard this race is, even though you think it shouldn’t be.

Super fun race. Everyone should do St. Anthony’s at least once! We had a great time with our friends from Raleigh (also Florida transplants and St. Anthony’s veterans) and am so glad we got to go back there this year. 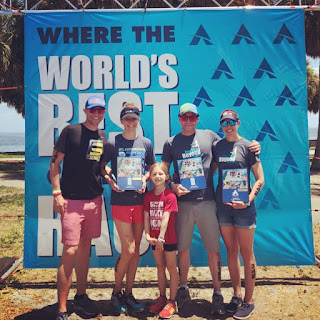 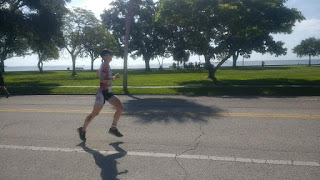 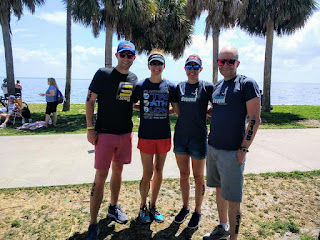 I know no one blogs anymore, but I still read the old school bloggers. I don't read much anymore :)