This guy gets the credit. Super dad – letting me train until my heart was content for this race. Super coach – writing me an awesome plan. Super supporter – taking the bulk of the work while in Chattanooga so I could relax. 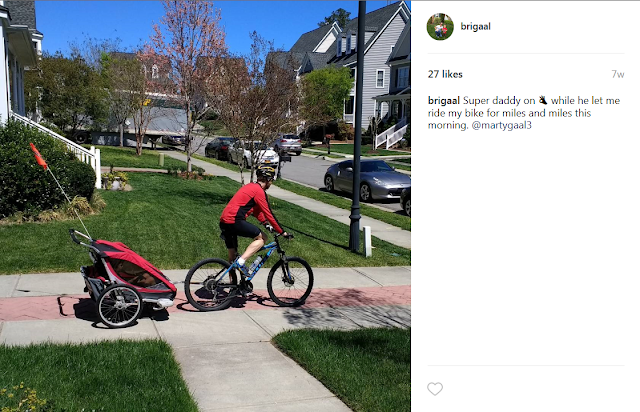 My training squad is a group of awesome ladies who are so motivating and supportive. Carrie-Anne-Morgan-Michelle-Amanda-Cari (and the boys who we call fast girls). You guys are awesome.
Theme music for the weekend: Anything from Trolls, which Logan watched no less than 6 times in the car ride over and back.


Video of the week: endless pool swimming in the Tennessee River the day before. That’s me in the front, sighting and thinking, “But that buoy isn’t that far away? Why am I not getting any closer?”


Pre-race
My taper went perfectly; I immediately got sick :) I was on a constant diet of airborne and zicam and literally by the day before the race I had cleared out all the congestion. We stayed in a condo right on the river away from downtown and the nerves/high strung personalities that these Ironman races tend to attract. My own obsessiveness revolved around checking the weather every hour. 100% chance of thunderstorms – oh please don’t cancel anything! A bad thunderstorm rolled through the night before, but, and I’m no Al Roker, the line just wasn’t that wide. Surely it would be through before the start of the race?
Swim: 16:02
Flanked by the best couple to be around, Anne and Dave Mac, we made our way to the swim line up very early so we could get a good spot. No rain, just cooler temps and cloudy skies (amazing! Maybe I am Al Roker!). All queued up in an orderly fashion, we sit down and wait. But then an Ironman worker comes walking by and yells, “OK everyone! This is a self-seeded started! So if you’re a fast swimmer, move to the front!” Instead of a line, people rushed to the front and it now looked like a street concert. And this self seeding business was total bs - people were lying their faces off worse than a pool swim back home. But no worries! It was still 1.2 miles, some of it upstream so it would get sorted out. Or would it? Dun dun dun!!!!!!

Apparently, the officials decided the pro's were taking too long to make the first initial upstream turn and didn't think us weak age groupers in our wetsuits could handle it so they took that part away and we were now only going to do a very short, downstream swim. Forget about getting much separation from the competition - people I probably would've gotten 6+ minutes on I might get 1-2min now. And there were so many people ahead of me, AUGGHHHHH PANIC!!!! Anne must've read all this on my face and firmly talked me off the cliff (thanks, Anne). I then turned to Dave and told him I was moving up, so the two of us were able to leapfrog probably 100 or so people.

This swim was a mess. I passed people the entire time; there were bodies everywhere. I never felt great and couldn't get into a good rhythm (and Dave and I lost each other immediately upon jumping into the water). It was over quick.


Bike: 2:27:18
I felt awesome on the bike! So, so good that there were times I felt like I should push a little bit more but then reconsidered (reminding myself that I did still have to run a half marathon after this). A couple of girls passed me in my age group but I wanted to ride my race, not theirs. And I wasn't even thinking about placement in my age group.

The bike was also very crowded and absolutely we all got the benefit of having so many people on the road - whether you were drafting or not. It's like a vacuum pulling you through, and with virtually no wind and a rolling but not difficult course, the times were smoking. There were for sure draft packs out there - sometimes you didn't have a choice in some of the tighter sections to be blocking someone or in the draft zone, but I also feel like you definitely had the ability to decide if you were go to blatantly suck wheel and take advantage of it or try to get out and race clean. I was mostly around guys and boy there were some that clearly had low moral standards with regards to cheating. I didn't see a ton of girls, but the ones I saw I can at least put in the camp of trying not to draft. But if you start 3000+ athletes within 20min of each other, in an easy swim that takes no time, the bike is going to be packed.

I really enjoyed the bike, though. I just felt SO GOOD. I was literally smiling at mile 50 thinking, I love this! This is awesome! I was diligent about my nutrition and took everything as planned. I don't have power or use a heart rate monitor, but my Garmin was beeping every 5 miles and I knew I was holding an excellent pace. I guess I'm still a little old school with that aspect. For a race like this, I go to the point where I feel like I'm pushing just a little too hard and then back off. It works for me.

Run: 1:39:19
No joke, I heard 'Can't Stop the Feeling' from Trolls at the beginning of my run (that's my jam!). The first few miles were all smiles and high fives. They were easy and smooth. I did ended up taking my gels earlier than planned as I needed a boost but the first lap was relatively uneventful. I was definitely getting tired but also felt like I was going to have enough left in the tank and mentally I was on point and ready to fight through any tough spots. I was so happy to finally see Marty and Logan! 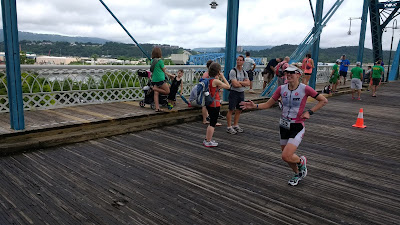 The temps were cooler, but the humidity was sky high and I allowed myself to walk through the later aid stations so I could grab coke and water (wow, coke, you're awesome). I also thought about my friends back home tracking me and Marty sacrificing weekends for this (self-centered) pursuit. And then when it really started to hurt, I thought of a friend who recently got some scary news - this girl is an amazing athlete (and person) who never quits, and is always digging to get it done. I often found myself saying, "Would SHE quit now? Would SHE go slower?" It helped tremendously.

There was one short but steep hill that I gave myself permission to walk up the second time around (Would SHE walk up this hill? Hmmm, actually I think SHE might :) ) but anytime I was running I was moving pretty well. I really feel like I weathered the low points well and was able to push out of them and hold it together, which is something I have struggled with in the past. I did start dealing with some quad cramping which was completely new to me and freaking hurt like hell. But then I was at mile 12 and knew I could pick it up a little bit and finish strong. Yay to getting to take the turn to the finish instead of starting another loop and double yay to slapping Logan's hand in the final stretch. 7:34 average pace - I'll take it! 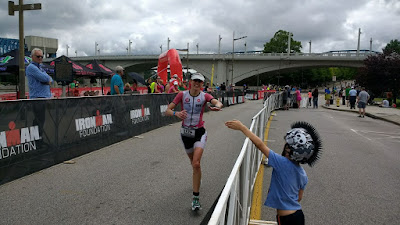 Post Race
I collected my award after showering and having a late lunch with friends. I passed on the World's slot and hopefully made someone else's day letting it roll down. I'm happy with how it all went and had a lot of fun training and racing for it, but now I'm ready to get back to more low key training and having a fun summer with family and friends.


*Big asterisk next to this PR since the swim was so short. Who really knows where I would've been, but I could guess my swim would've had another 12min to it. Which would have probably also slowed down the bike a bit. I'll say I may have still been under 4:50 but eh, doesn't really matter at this point.

1. I love that you killed this race.

2. That explains why so many amateurs were faster than the pros. I was confused.

3. Rolling starts SUCK AND ARE STUPID