Well that was fun

Marty and I (and whole lot of athletes and friends) raced in the Inside Out Sports Beaverdam Olympic Triathlon this past Saturday. I hadn't done an Olympic distance race in I think 2.5 years so I wasn't totally sure how to pace it. And after not really resting up for, and knowing I still had a lot of working out to do after, I decided on a plan.

Swim: whatever. First open water swim of the year on overall low training. My swim is not great right now, frankly it's not even good, but I'm not worried about the swim at the Triple T.  I was SO happy that the water had warmed up to the low 70s.

Bike: comfy fast first half, pick it up second half

Run: comfy fast first half, pick it up second half

This is not the fastest way to race a race, but it is FUN!! Feeling strong at the end is a nice feeling. As opposed to the death march which I have definitely been apart of before.

Carrie wasn't racing, so she offered to watch Logan during and we no longer had to get a babysitter to come over in the morning. Plus, Logan got to hang with Campbell and Wes and his pretend mommy.  With a 9am start, this also meant we didn't have to get up crazy early like most races.  Just kind of early.

Swim was fine. The women started in third wave so there were lots of men to pass throughout.
Bike - this took a little while to get comfortable so my strategy of holding back happened regardless.  I upped the effort coming back, really only because I wanted to catch Erik before we dismounted. I caught him right before we got back to the park entrance so mission accomplished there.
Run felt good.  I stuck with the plan and held a steady pace for the first lap and dropped the pace the second lap.  I can't really remember my split, but I think I negative split by 1.5min or so. The run flew by cheering for everyone out there. It was great to know so many people competing.

And our awards were beavers.  Cue lots of bad jokes.

Our friend Dave Mac was out with his camera acting like the paparazzi so we got all sorts of fun photos.

Here I am racking my bike very seriously. Actually, I'm internally annoyed that every bike on the rack chose to be on one side therefore making it nearly impossible to fit anyone else in. 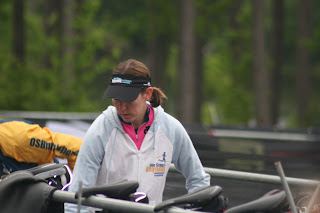 Happy to be swimming in my wetsuit in a not so cold lake! Yay for small miracles! This is race is notorious for having cold and/or bad weather. We lucked out this year. 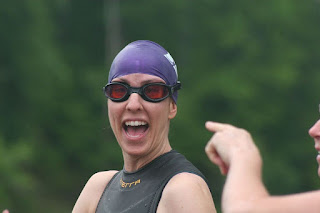 Running out of the water trying to remember how to get the wetsuit off.  T1 is up a long uphill sidewalk and by the time I got there the only thing I wanted to do was take 5 and catch my breath. 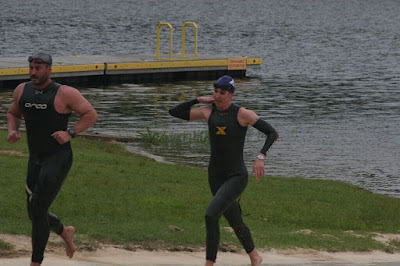 A fit Marty en route to his second place overall finish. P.S. he rode 65 miles the day before! 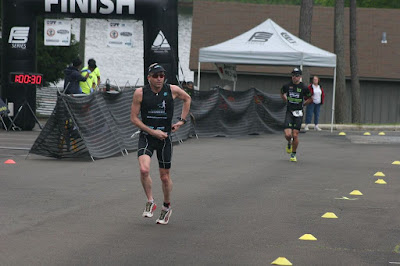 Logan and Campbell waiting to get high fives from everyone. 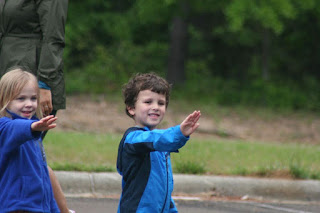 Another kid wanted a high five. Sure, why not? 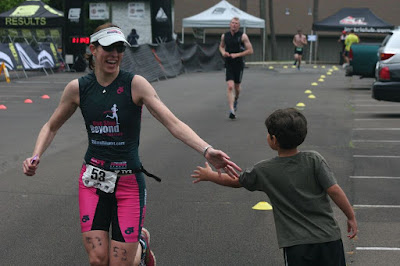 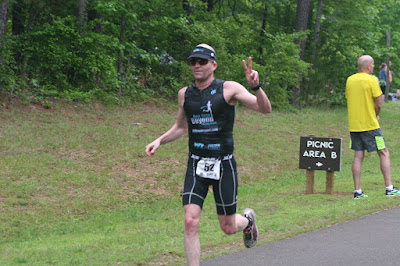 Logan had said he wanted to run in with us. And I wasn't going to say no to him. 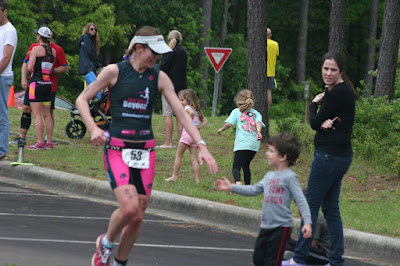 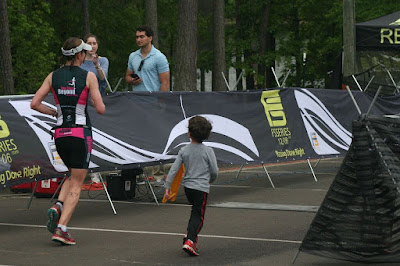 Pretend mommy no doubt laughing at beaver jokes. Her's were much better. 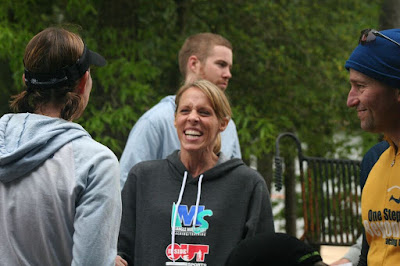