Is this thing on?

Oh HELLLLLLO out there! This blog has been neglected. With the other social media arenas it has gone to the wayside (like many other blogs that used to update frequently!) But alas, I figured I'd update the 1 or 2 readers out there - we are all doing great here in NC!

November: Marty's birthday, Thanksgiving, good times
December: Logan turned 4, family came in for Christmas, it was warm, and we had lots of fun
January: more serious training started, work got crazy busy, did the Occoneechee Speedway Relay again
February: consistent training has turned into feeling like this American Triple T race might actually be doable when it rolls around in May

Marty and I have been rotating through babysitters, friends, and each other to get our training in.  But we've been getting it in, nonetheless. My dear friend, Carrie, has been by my side through most of it and it has been much more enjoyable because of that.  First race up is the Tobacco Road half marathon on March 13 - I use the term race very loosely because although I'm feeling good and strong, there is no speed (at least in the way of long distance speed) in these legs at the moment.  I can easily run 13.1 miles, but it will not be very fast. Which is cool, as what we're training for is not meant to be fast.

What are we training for? The American Triple T which is an iron-distance over the course of 3 days with 4 different races.  Basically - Friday evening: super sprint, Saturday morning: Olympic distance, Saturday evening: Olympic distance, Sunday morning: half iron. Marty and I signed up as a team which means that we both do all the races, but the last two we could draft.

Except. The race organization recently decided to do away with the team concept. Which totally sucks, in my opinion, to change something like that fairly close to the race, way after people have signed up and have begun training. They have had the 'team category' for years and years at this race. So I'm not happy about this sudden change (it seems like making this change either should've been done WAY earlier, or for next years race). Anyways, we're still going to do it together, but obviously not draft.

Feeling fit not fast. Having fun and eating lots.  Logan is the best dessert buddy ever. 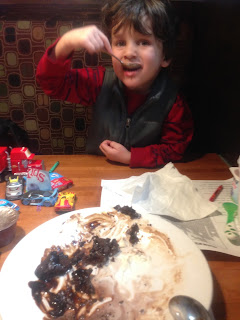 Pretty sure you have more than 1-2 readers. Everything in "blog World" is way different that's for sure.

I was thinking about this, btw, the whole blogs kinda disappearing thing. But I'm on Twitter and FB constantly. I think it's just part of the evolution of the internet/technology, etc.