Not running and running

All summer I had been dealing with what was probably a little bit of Achilles tendonitis, but had been managing it pretty well.  After the Wilmington YMCA and another hard workout that week, my leg/foot decided it was time for me to take a break.  Not totally surprising as my right calf area always seems to give in before anything else. I think I also wore a little too many flip flops this summer that didn’t have enough support (I neeeeeeeeed support) as well as not using a better insole in my running shoes.  Live and learn, again. I should know better.  So this all lead to me taking some down time with my running. Since I couldn’t run, I went to the pool more than normal and ended up swimming sort of decently at our last open water race and got third overall in the series. Which meant a SWIMMING TROPHY!!! My first ever. But don’t overthink this too much since Marty is the race director and we bought the trophies using our tiny profit margin.  Soooo. 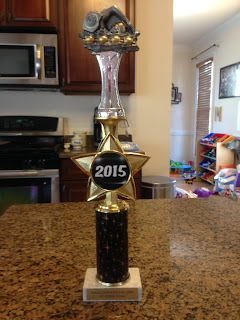 While I may not have been running, Logan was and he too won a trophy! At the end of his 4 race series (in the age-group Pre-K, 50 yard dashers) he finished 2nd.  I don’t think he totally ever understood exactly WHY he won a trophy, as seen by this picture. 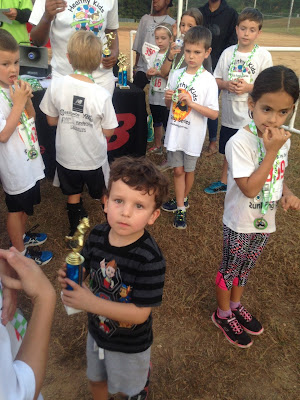 But we were excited for him. And here he is excited with his series medal with his best girl, Jade. 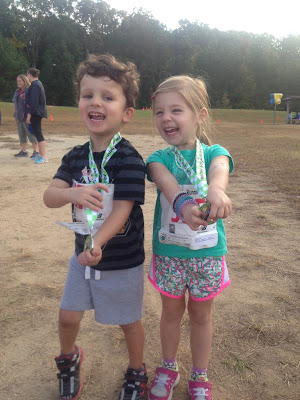 I have figured out the strategy for these races, in case you’re wondering. First, if you’re 4 years old, you have a very clear advantage over the rest of the kids who are usually just 3.  Also, if you can get started running right after the announcer says, “GO!” (as opposed to several seconds later) AND run in a straight line (extremely hard for these kids to do) then you will do well.

I have also started running again and man, it’s so unfair how quickly fitness goes. But at least our weather is nice.