Whoah I can’t believe over an entire month has gone by without an update! Blogs have been kind of dying out for several years now, but I do still enjoy reading other people’s.  I have a pretty short list at this point, much shorter than it used to be. Some due to the attrition rate of blogs in general and some due to the fact I just don’t want to always read about random people I don’t actually know.  I still read people’s that I have never met, but these seem to be people I have been reading for so long I feel like I DO know them! Like if I ever find out they are coming to the Raleigh area, I will definitely want to meet them out for a beer.


s with everyone, a lot has happened in a month.  Since my ‘horrible 5K’ I have been fairly consistent with training and my ‘A’ upcoming race is the Apex Turkey Trot where lots of trash-talking has already started with my nemesis Erik.  I had one week of mostly zero’s as I caught a nasty cold that wouldn’t quit. This coincided with changing jobs (long story) which definitely didn’t help matters and probably slowed the recovery.  But I’m feeling good again and will even be doing my first double in many years today.


We’re getting ready for Halloween although me being not crafty and not having the patience for Pinterest, this is what Logan’s pumpkin looks like. He is very happy with it as he doesn’t have a clue about actually carving one. He is going to be a race car driver for trick-or-treating which will be his first time. And our new neighborhood looks like it’s going to be awesome for Halloween. The HOA has a house decorating contest and I have never seen so many graveyards in people’s lawns before.


We’ve also had a slew of visitors recently – first Marty’s dad for a weekend, then our friends Sam & Kevin who moved to Texas, then Marty’s mom, and my mom is flying in on Wednesday. It’s really nice to be able to host people now that we have the room for it.


I would also like to give a shout out to the country of Australia and my nemesis Erik for introducing The Wiggles to Logan.  Fruit Salad, Yummy Yummy. 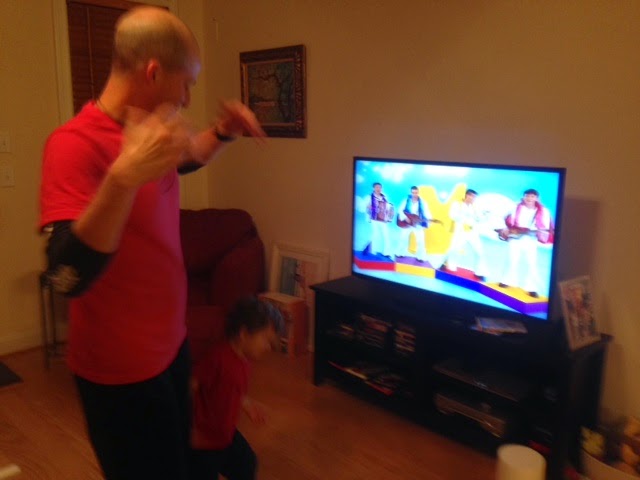 Blogs have been dying out huh?? My list is pretty short too pretty much for the same reason.

I still read your and Marty's blog, and have been around for several years too.

Switched jobs again huh?? You never really talk too much about work, obviously other things are more important to you.

I hope if I make it to Raleigh (for more than a layover at the airport), you will meet me for a beer.