Things that have happened:

I got a new job. This has coincided with a decline in my training - some motivational issues and some busy-ness have collided to equal missed workouts. Mostly, I'm training so I can eat lots of desserts, which has always been my biggest underlying theme for many years.

Logan turned two.  This kid - so cute and so boy. My friend explained it best: they are totally bipolar. One minute he is happy and 2 seconds later he can be screaming 'NOOOOOO' and crying.

He has become a pro at opening gifts.

He eats sandwiches like this - starts in the middle. 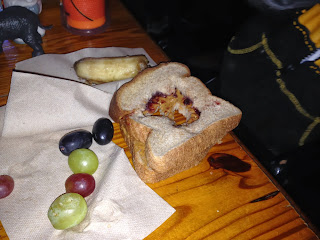 We decided to start a tradition since his birthday is December 12th, to not do anything Christmas until after his birthday. This way we can keep the two separate. On December 13th, we put up the Christmas tree. And for those of you astute readers, an explanation: it was tacky Christmas sweater day at work. 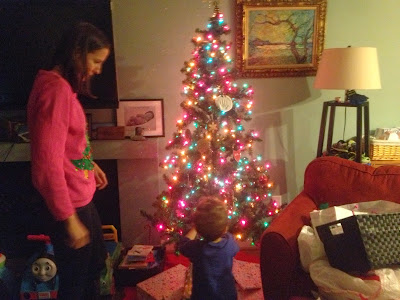 We did a 5K in Pittsboro earlier in December with a bunch of friends and then had breakfast at Peggy and Dave's house afterwards. Peggy makes incredible french toast, and I'm kind of a snobby connoisseur so I can confidently say this. This was the day that Logan was introduced to Cars (the movie) and obsessed is not a strong enough word for how he feels about it now. I would estimated he asks about 15 times a day if he can watch it. 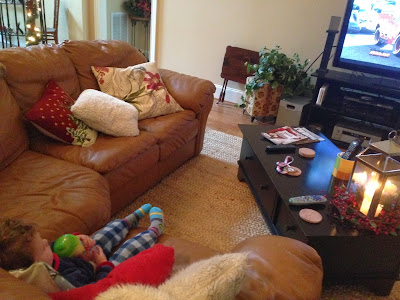 Logan's daycare put on a Christmas pageant. I think they were some sort of Shepard's but the whole thing was in Spanish so what do I know. This is backstage while he was getting ready with his teacher Miss Gloria.


Logan did good at the beginning, 'singing' and ringing his jingle bells, but then he saw Marty who was off to the side taking 110 pictures and he started running towards him. When the teachers tried to get him back he started crying and threw himself to the ground. Marty was able to help him get it together and back onstage. 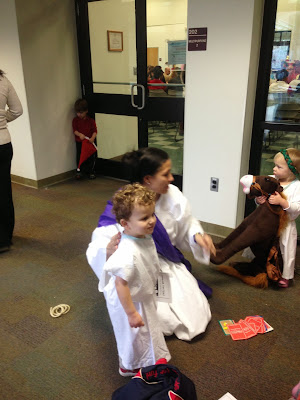 Speaking of Spanish, Logan is saying a ton of words, although most not very correctly. Some of his favorites are: Adoo-yah (Ayudah - help), Bai-yo (Caballo - horse), Luna (luna - moon) and many, many more.

I also had to put him in timeout for the very first time because he had quite the tantrum when I told him, no, he couldn't watch Cars and THEN he threw a car at me.  Oh no he di'int. He was sooo stubborn and wouldn't say sorry so he sat there for a very long time. "They" say that a child should be in timeout for 1 year = 1 minute. So every 2 minutes I would ask:  Logan, are you sorry?  He would respond: NOOOOO!  Then he fell asleep. Well played, kid.


The weekend before Christmas was unseasonably warm (70s!) and Marty let me get out with my girls for a nice bike ride while him and Logan visited a cool Raleigh park that has a train and a carousel. The ride was great and we kept it nice and slow. My elbows and wrists ached towards the end which is a sure sign of me being out of bike shape because I haven't been in that position putting pressure on those parts.  And my boys had fun, too. 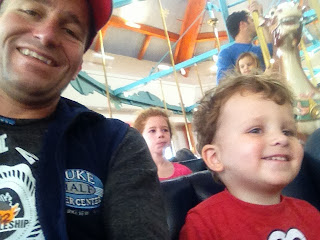 We had a very low key Christmas with just us as all family was elsewhere.  Marty, unfortunately got sick and was down and out for a few days, but he's feeling much better now.  Some very nice friends of ours let us use their beach house in Ocean Isle Beach, NC for a few days so we could get away.

Now we're back home and I'm enjoying a few more days off before I head back to work on Thursday. We don't have any big NYE plans because we're lame and I like to go to bed early :)  But I am going to get my butt out the door and do a 5K which will at least guarantee me a good workout.