The weekend was a little nutso, particularly getting all of our stuff set at both transitions and dropping a car off downtown, all with Junior Awesome in tow who was a trooper.  While others might have been relaxing with their feet up the day before the race I was out at the park chasing him around. Life doesn't stop just because you sign up for a race!

At the pre-race meetings the organization kept on relaying the current water temperature and it had climbed all the way to 79 degrees on Saturday. With how hot the day was and how not low the lows would get overnight it was recommended that you don't even bring your wetsuit. The wetsuit cutoff for WTC is 76.1.

Wonder of wonders, they managed to measure the water temperature at 76.0 degrees on race morning. Hmmmmm. At least when my wave went off, the water was warm. And take that statement for what it's worth coming from me. Here is a card my friend Mary sent to me recently (she said she immediately thought of me when she saw it). 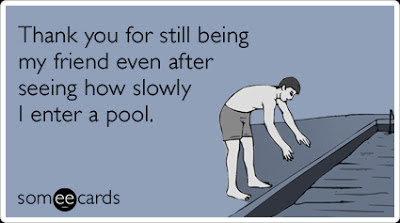 So I was mad at myself for not bringing my wetsuit because it certainly makes me faster in the water and it would save my legs a bit for the bike and the run. On the other hand, I had a little voice inside of my head saying it was a good thing because the day would be hot (especially with my waves late start) and not becoming unnecessarily warm at the beginning would be a good thing.


Plus, I did not have any competitive goals. All I wanted to do was cruise and enjoy it. So that's what I did. I didn't push the swim, I just got out there and swam. The two waves ahead of us (which consisted of men 34 and under) were tough to get through. LOTS of breastrokers and people everywhere. The long backside was a bit choppy and coming in the final stretch also had some rolling chop, but that is typical for Jordan Lake if there's any wind so it didn't bother me. 33:10 and 4th in my age group.

The bike was going to be a bit of an unknown since my long bikes were few and far between. But I had a plan - don't push. And eat and drink, a lot!  That's exactly what I did and it was great. I knew the front half was easier than the back half so I put it in an effort where I barely felt like I was pushing the pedals. One good thing about going so far in the back is there are tons of people to pass so this boosts your confidence :)  And I was so surprised at the spectator support out there for this bike ride. I figured there wouldn't be any but I was wrong. The bike went by very fast for me and I had no idea that I was leading my age group for most of the second half?! That is crazy.  I switched off a couple of times with a friend of mine Becky, who hadn't done a triathlon in 7 years after having 2 kids! And then towards the end a girl in my age group passed me and she looked very serious. I didn't even think about trying to stay with her.  Bike split was 2:43:13 on a rolling course and I'm stoked!  And 2nd place in age group?! That is most surprising to me. I did get quite fried on my back even with tons of sunscreen, but the sun was intense when I was riding.

I was excited to get to the run. I knew I hadn't overcooked myself on the bike and my plan was to cruise the run and just pretend I was out doing a long run with a bunch of other people. I felt awesome. I was easily holding under 8min miles and then 8min miles for a long time and it felt so easy. There was already a lot of carnage on the course with many people walking and I got lots of "you look incredible" from the spectators. It was so fun and I saw so many friends out on the course.  The greenway near the art museum is a bit brutal but I just jogged up the hills.

I still felt great coming back and then almost out of nowhere my stomach totally turned on me. And there was a moment of panic where I realized that this could turn into a very bad situation.  Luckily, LUCKILY, a well place portopotty saved me from a disastrous situation. This was right around mile 9.5. I literally stepped over a timing mat and right into the john.

I spent quite some time in there. It was not pretty.

When I finally got out I thought that I would go back to where I was before but apparently my stomach had had enough.  I'm not sure exactly why that happened: the heat, my nutrition, nutrition in the heat (hard to practice race day effort + nutrition for a hot day when we didn't have any hot days), the fact that I don't race long and probably don't have my nutrition really dialed in...who knows but it really sucked that my stomach was hurting so badly when the rest of me felt so great. I had to walk a ton the last 3 miles because every time I started to run my stomach hurt intensely.

Oh well, whatever, I actually still managed my best case scenario time even with all my walking - 5:15! The finish stretch was awesome and I'm so glad my stomach had settled down by then so I didn't have to walk there. The crowd was amazing and you totally felt like a rockstar coming down the chute.

The volunteers were also so great out there. And seeing so many people during the race and cheering me on that I knew was so fun. My good friends Kari, Alysia and Heidi got to see me in a bad place around mile 11 when I was walking and I relayed about my tummy troubles. I really wanted to ask one of them to walk in with me because I was frankly so bored at that point (walking takes sooooo long). I also walked a bit with a 50 year old man who was having the exact same trouble I was. We both were able to pull it together and run in and he wanted me to go ahead of him for my finish picture (which I totally don't care about, and good thing because some big dude kind of elbowed me out of the way anyways).  A lot of people struggled on that run.

I finished 4th in my age group and was in 2nd solidly until my stomach erupted. I thought maybe if I had a good day I might finish in the top ten in my age group so this is awesome. I even got a rolldown spot to Vegas but I wasn't there for awards (Marty had to take me home because I was still not feeling well at all after) but there is no way on this planet I wanted that spot. Time for some sprint triathlons and no more long stuff!!

And Team OSB had a great day. We had two age group winners (and my athlete Kory finished as the 3rd amateur!) and numerous other great results. Marty held it together and put together a solid performance, too.  Next up: Boone Camp!!
Posted by BriGaal at 6:13 AM

Bri! Sorry about the tummy troubles!! That's the worst but you obviously still held it together for a great day. I had a feeling you would surprise yourself even though you weren't necessarily "competing"! :) And as for the wetsuits - not bringing yours was a blessing in disguise. I've never been so hot and miserable in a swim in my life with my wetsuit on!

Your noncompeting self is quite fast! Congrats on having fun.

Junior Awesome's Mom you are pretty awesome yourself! And inspiring. I love reading reports without any second guessing. It is so refreshing. And you enjoyed your day and the moment! Congratulations!

First, I love that meme about getting in the pool. Second, you are a beast, especially for not really training. And third, that stomach problem from out of no where is the WORST!

Great job Bri! You totally rocked it with little training and with the stomach issues!! Big Congrats!

Tales From My Tire Swing said...

This made me laugh and a fews tears of funny came out. I love that you cruise under 8min pace! I also love that you are human and admit it. Awesome time in and of itself, but especially with your issues. Inspirational and honest!