My sister flew into town on Thursday afternoon, just in time for NC to have our hottest weather of the year. Holy hotness, Batman! Summer is here!

I tagged along with her to Chapel Hill (her happy place) on Friday. We did some shopping and eating (I had a cupcake called "Frat Boy" - it was yummy).  Then that night our babysitter, Lovely Rita, came over so the 3 of us could enjoy a nice dinner in downtown before we went to the Big Boss Brewery and drank some delicious beer.

Saturday was pretty low key. I had decided earlier in the week to sign up for a local sprint race on Sunday so except for driving to pick up my packet, most of the day was spent hanging out with Logan in the living room.

That night we met some friends out at a local pizza place, and Logan was reunited with his betrothed, Elle.  He was very happy to see her and promptly took her rattle and stuck it in his mouth, then tried to pull her shirt down. We apparently need have a talk with him and cover topics such as 'coming on too strong' and 'father's don't like it when you're handsy with their daughters.' 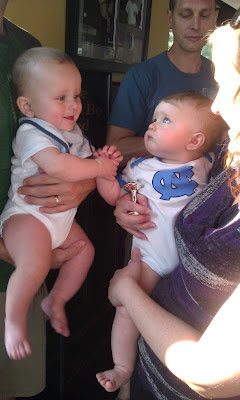 Don't worry, though, Elle held her own. 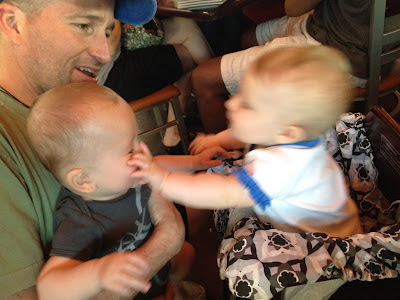 Logan can now sit in a high chair and is very entertained trying to pick up and eat cheerios. Out of about 20 cheerios, one may actually get close to his mouth, and of those, another 1 out of 10 might actually make it in his mouth. It was a complete minefield of cheerios under his high chair at the restaurant.  The next night he had cut down those percentages considerably.  There's no place to go but up with physical skills when you're his age. 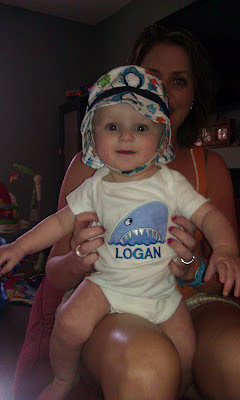 The next morning was the race: Smile Train Sprint Triathlon. It was a shorty - 250 meter swim, 12.5 mile bike, 5K run. I was happy for a short swim and was also happy no one passed me in the pool. I even managed to pass one person! The bike was pretty nice after you got through the first mile of neighborhood speed bumps. It was rolling but nothing horrible. I felt better on the return trip then I did going out. And the run was hilly and hot.  The only shade out there was from the finish banner, I think. They also made it a legit 5K as opposed to other years apparently, when it was a bit short. I wouldn't have minded it being a bit short this year! It was nice to win - it's funny, I think I've won more races this year than I have in any previous year here in NC!

It was a fun event. I didn't stick around for awards since it was so hot and I had heard that it takes quite awhile. Plus, I wanted to get home to hang out with Shana and Logan. It was great having them and Marty out there cheering for me.

Congratulations honey and that finishing form looks great! Then of course there is that handsome little man and his girlfriend who was wearing a very appropriate outfit :)

seems I congratulated you somewhere, but who can remember. Congrats... again. :P

Looks like it was a fun day for everybody. Loved the report on Logan and his girlfriend!