Logan had his 2 month check-up on Monday. He's 12lbs 2oz and 23 inches long, putting him at the 50th percentile for both height and weight. His head circumference is at the 90th percentile, though. Kid's already got a big head. I guess we should stop telling him he's the cutest baby ever. Har dee har har.

He's got a wicked case of cradle cap, which should go away between now and several months. You gotta love all this weird baby stuff they get. To treat it, you can rub olive oil on his head and then use a soft brush or comb to help loosen the flakes. You never know what he will like (this) or not like (baths), but yeah, he absolutely loves getting his little (big?) head massaged. He almost always goes comatose when I'm doing it. He even likes getting his hair washed after. Go figure.

We're getting lots of cooing and smiles now. It's absolutely adorable.

Here's a picture of him in his Valentine's Day outfit. Tassie is always close by. 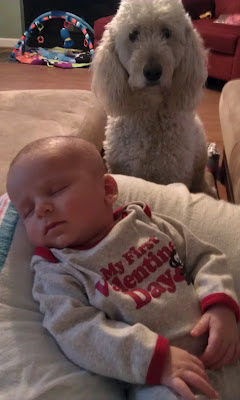 Here's another when he was awake and wiggling all over the place in his bouncy seat. 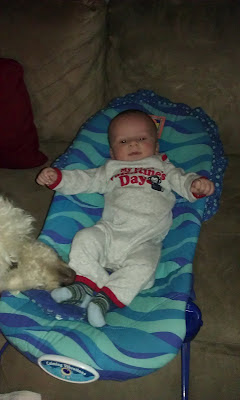 And we've been taking monthly pictures with a big stuffed animal (UNC Ram - from my sister who went there and is a big fan. Any of you who don't like this could've gotten us something different!)

Here he is as a newborn (not quite 1 week). I forgot how orange (jaundice) he was! You can see my mom's hand trying to hold him up. 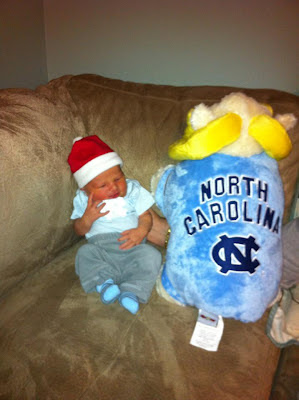 And here he is at 1 month, still needing a bit of help to stay put. He wasn't particularly happy when we were taking his picture here. 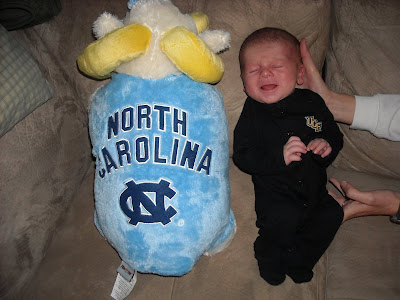 And now at 2 months. Look ma! I can do this myself now! 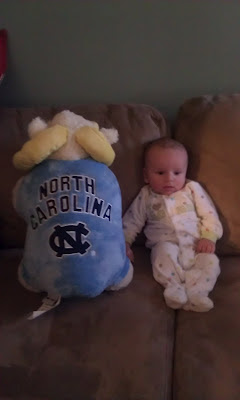 Overall, he's a very good baby, at least as far I can tell since I have pretty much nothing to compare him to. When he gets fussy, it's usually because he's hungry. Thankfully, he was never colicky, and getting bounced on the stability ball is pure gold. My dad says it's because I ran with him so much when I was pregnant and he likes that motion ;) For the past several weeks he's been in a routine of sleeping a 4hr stretch (breastmilk) or 5hr stretch (formula) at night, then waking up. I'll feed him again and then he'll go back down for another 2-3hrs. We've had a few 6-7hrs stretches over the past 2 weeks so hopefully that is some foreshadowing because it was heavenly! As my sister-in-law said, they don't typically go backwards so at least the nights of 2-3hrs should be pretty much done.

He's also holding his head up much better now so I've been able to get him in the Baby Bjorn with him facing out which he seems to like MUCH better than turned toward me not being able to see anything. 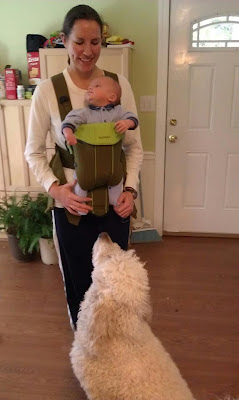 What a cutie - great to hear he is doing so well! And Tassie is cracking me up - close by in all the pictures just like you said. :)

Looks like he's doing great! Once they start sleeping life just gets so much easier so you are almost there!

And when I was breastfeeding Zach I was ravenous ALL the time. It got to point where I had to take really make efforts to keep weight on. It was fabulous, honestly, and I am kind of hoping it happens again.

Logan is adorable. And I love all the pictures with the ram.